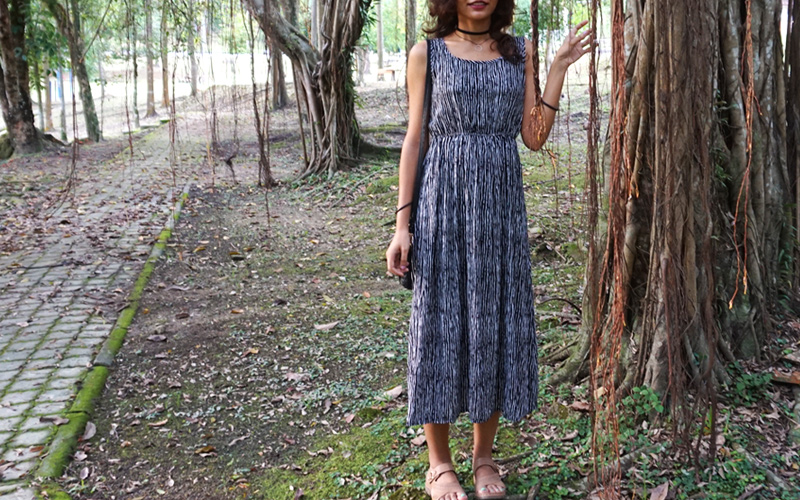 The time I wore a relaxed striped midi dress, stood around trees and got bitten by mosquitoes.

The sun came out and away we dashed to our local garden on a whimsy because I wanted to have shots of ancient trees and I totally forgot about the darn mosquitoes which had a feast on us and my poor mom who was the photographer on duty got bitten so many times that she had no fun except for when we got home and had a look of her photography skills and felt proud.

Make no mistake though, this side of town -- okay, the whole country -- is notorious for crazy mosquitoes that the only way to survive is to wear some kind of mosquito repellent during the evening if gallivanting at an outdoor park is your idea of fun. This is especially needed after days of pouring rain. I just didn’t think at the time because the sight of a rare sunny evening tempted me before my brains could function. There were as usual joggers and people fishing in the park and nobody else except for me using the greenery as a shoot backdrop. I enjoyed the smell of wild flowers but didn’t care much for the odor coming off of some sweaty people.

I saw a very old man who had his evening walk with such a vibrance in his spirit that moved me. Another old man was fishing for a tilapia and that perked my interest as I didn’t know the murky lotus-filled lake had that kind of fish. The big fat lizard I saw munching on a fish months back must have been eating a tilapia. The tilapia hunter told me that the fish were smart so he stayed far away from the body of water to increase the likelihood that one starving tilapia might get seduced by the bait.

Well, he didn’t phrase it the way I write here exactly. I am prone to exaggerate when I type. Before I left, I said to him I would quietly go now, so his dinner would be on its way. While I was chatting, my mom was comfortably blasting her AC in the car, possibly pissed that I was still photographing away. The variety of ancient trees was to be blamed. I just couldn’t stop snapping. 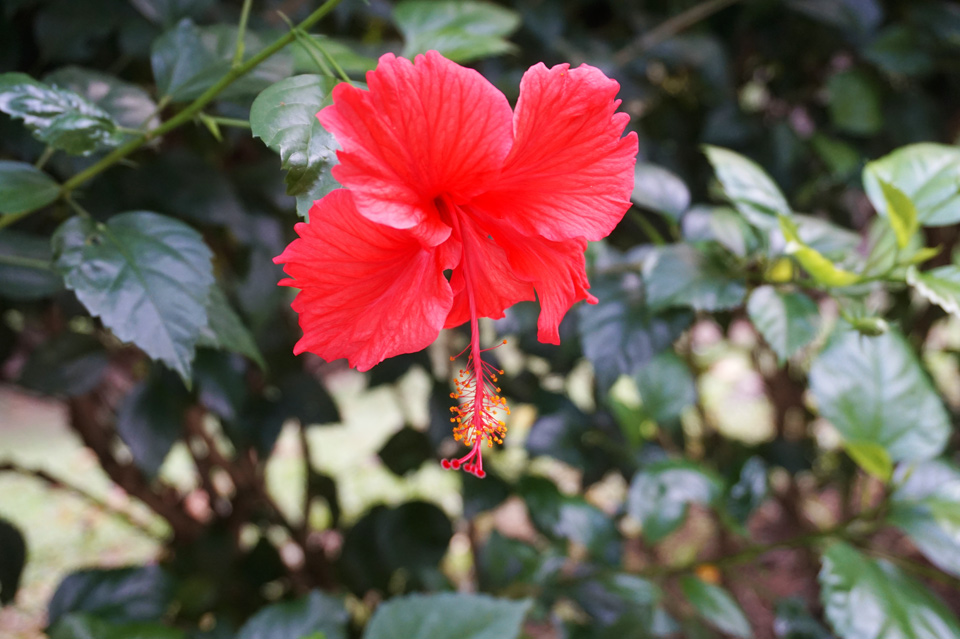 The hibiscus is Malaysia’s national flower. Mom saw this red beauty and got excited. It was droopy, as though tired just like some humans after a long day. I thought it was sleeping. I was wrong. The phenomenon is called nyctinasty - a mechanism that involves some parts of the flower to grow faster than the upper most petals during darkness or in the presence of cool air, thereby shutting the flowers off. 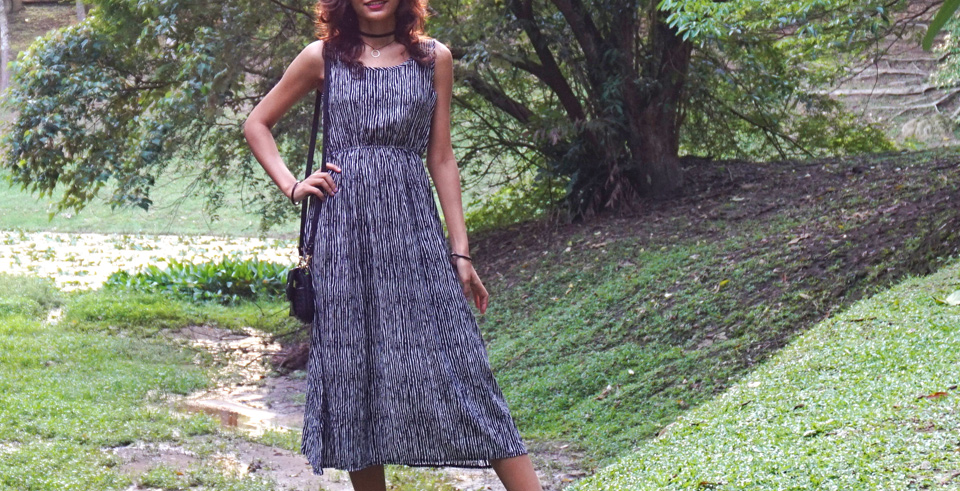 I don’t wear necklaces that much because I love my neck to be free from things that go around it but I had to give this circle choker a try. It was kind of cute in a way that it went with the dress. My sister is totally in love with it and because I am the best sister ever I said that the choker is hers! 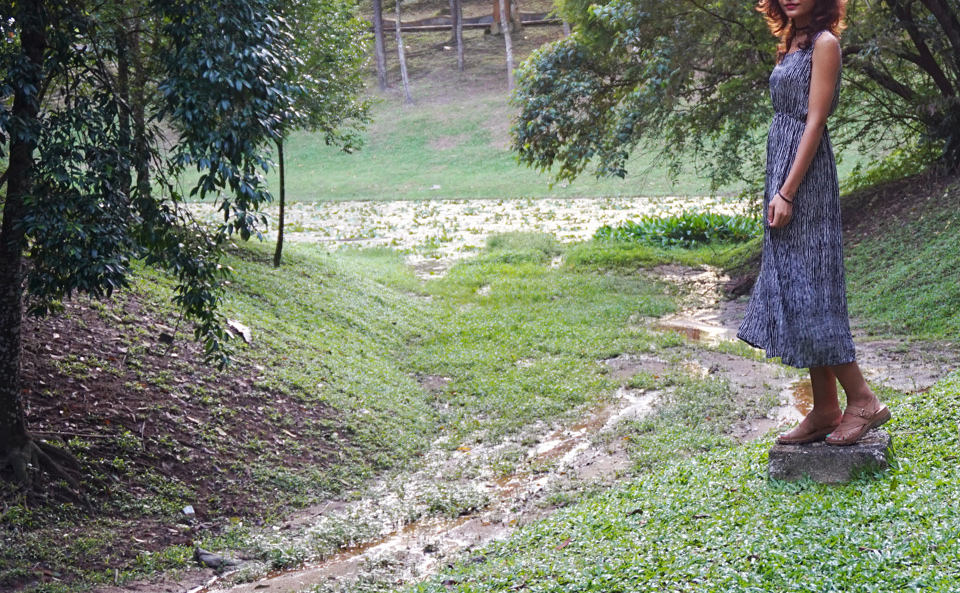 The sandals I wore were flesh-colored though I am browner but they had this beige appeal that I so appreciate in footwear because it will blend with whatever I wear and that is a good thing! 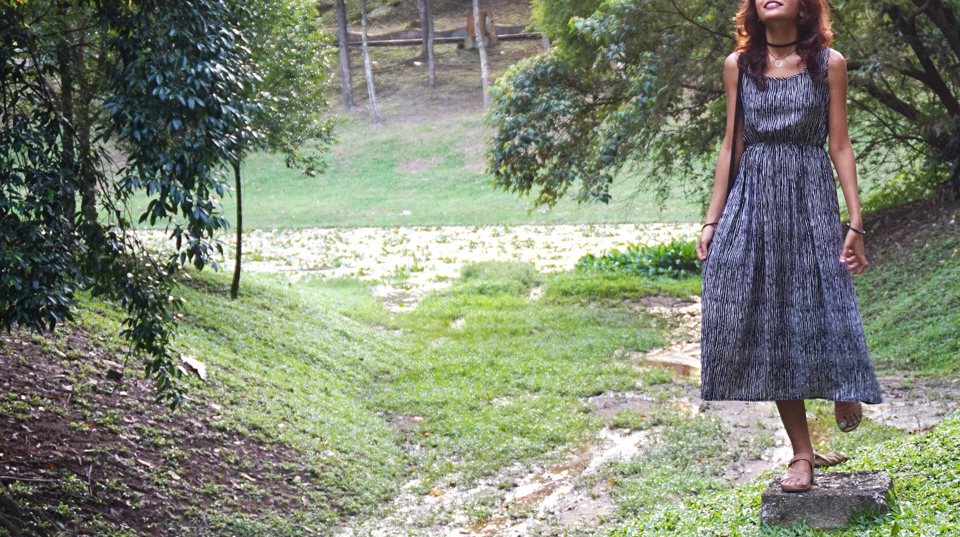 I appeared to be having a blast standing on a piece of stray concrete. This abstract stripe midi dress in monochrome black and white is lightweight and awesome, I’d wear it all the time but legs get hairy and I get lazy. 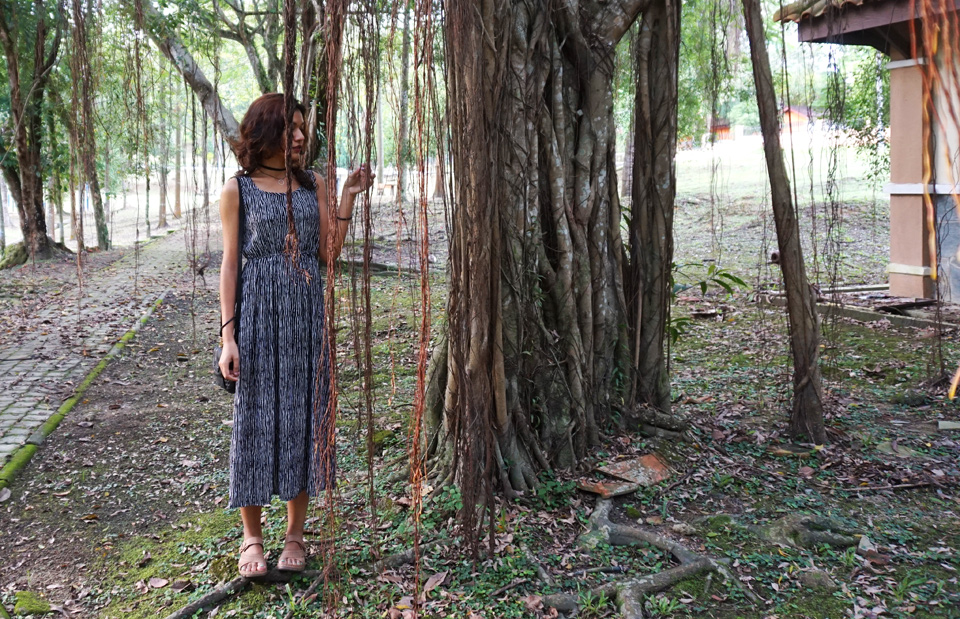 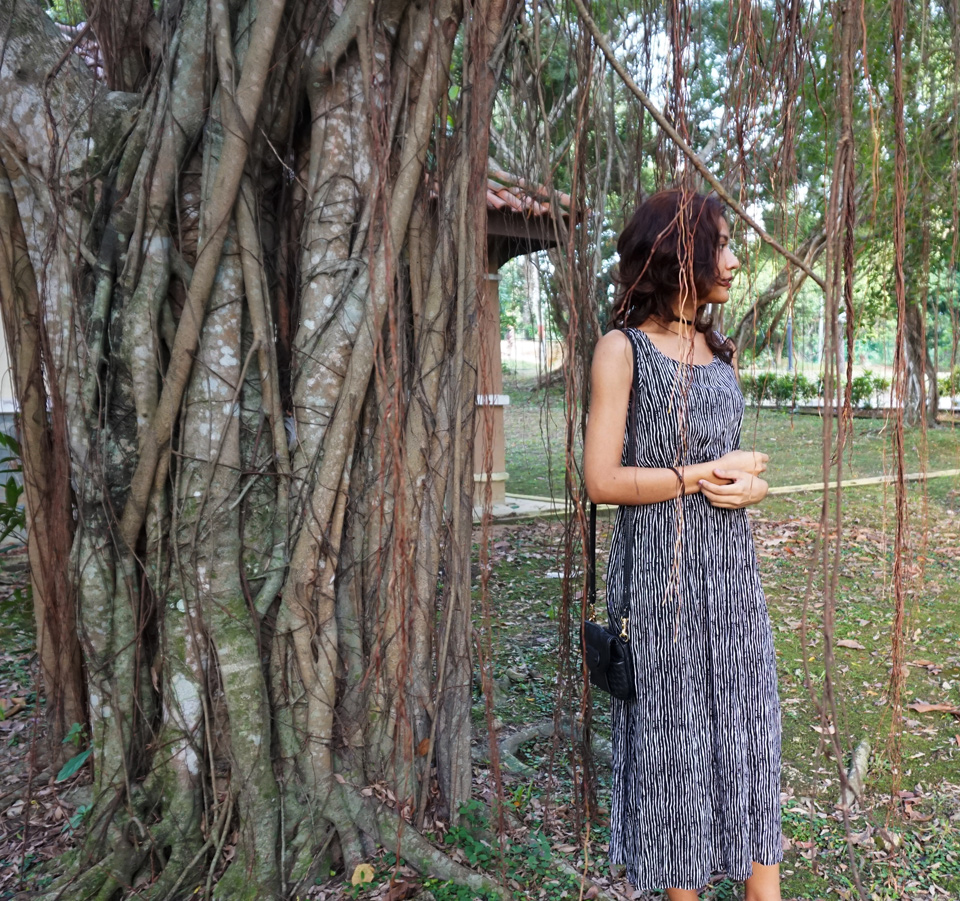 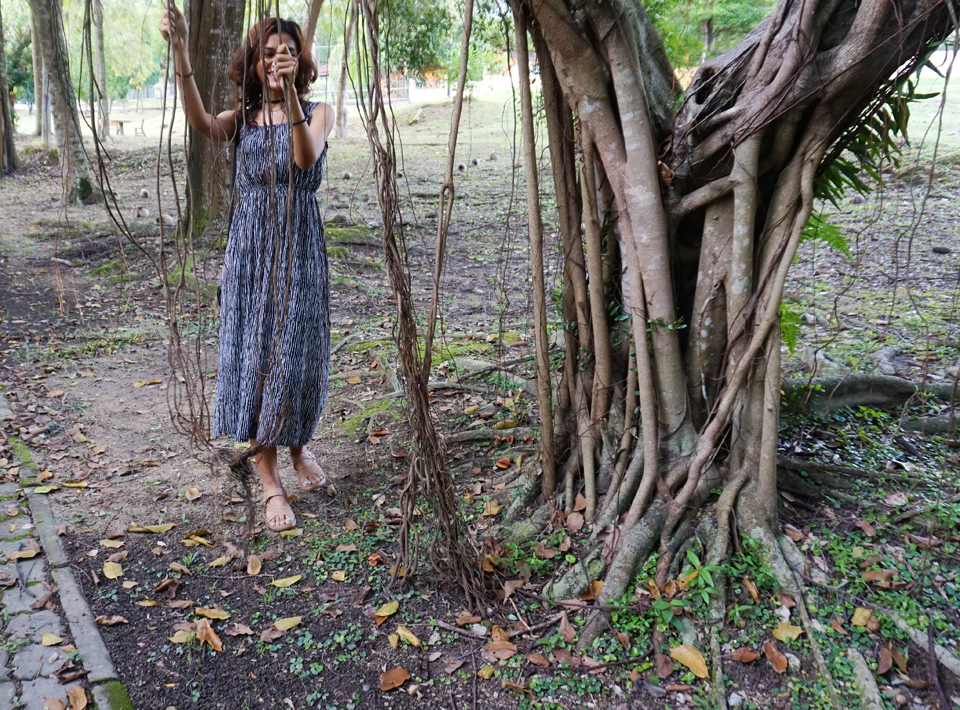 I had pictures with a few other trees but this one, with dangling root/branch things made me so happy, I felt like Tarzan. I googled and found that these dangling things are called aerial roots. Wow, I am so all about aerial roots! 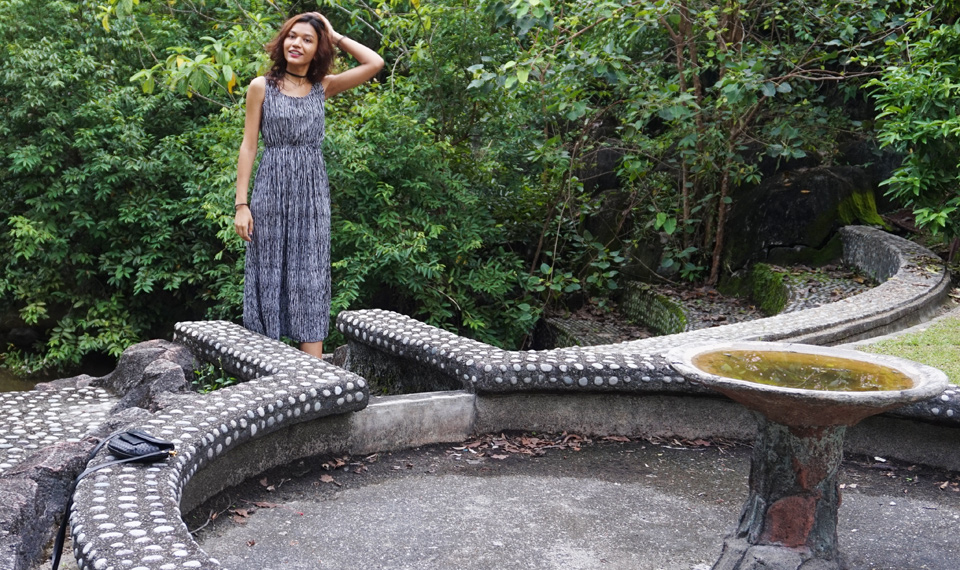 This part of the garden used to be a faux pond with cascading water where I was standing. I felt witchy suddenly and decided to do another spell – I did one in my previous post.

I performed the spell with my hands like spread the way you can imagine and see down below. It was pretty intense. 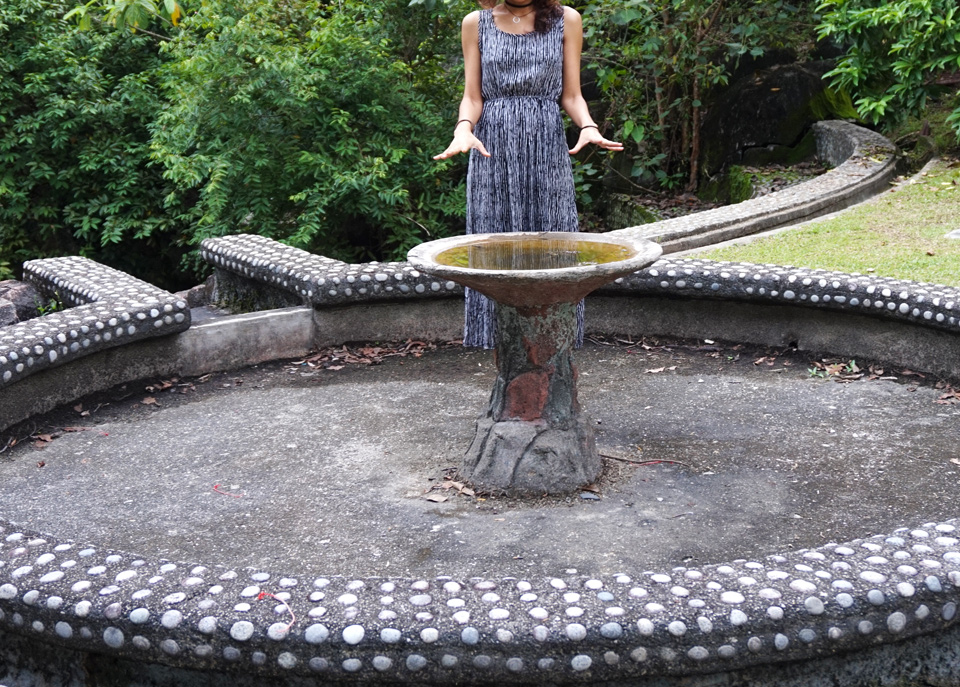 The outcome of the spell had me levitating which you can totally see in this picture like it is no joke. My legs were not hidden. They became invisible. I am quite good at witching. 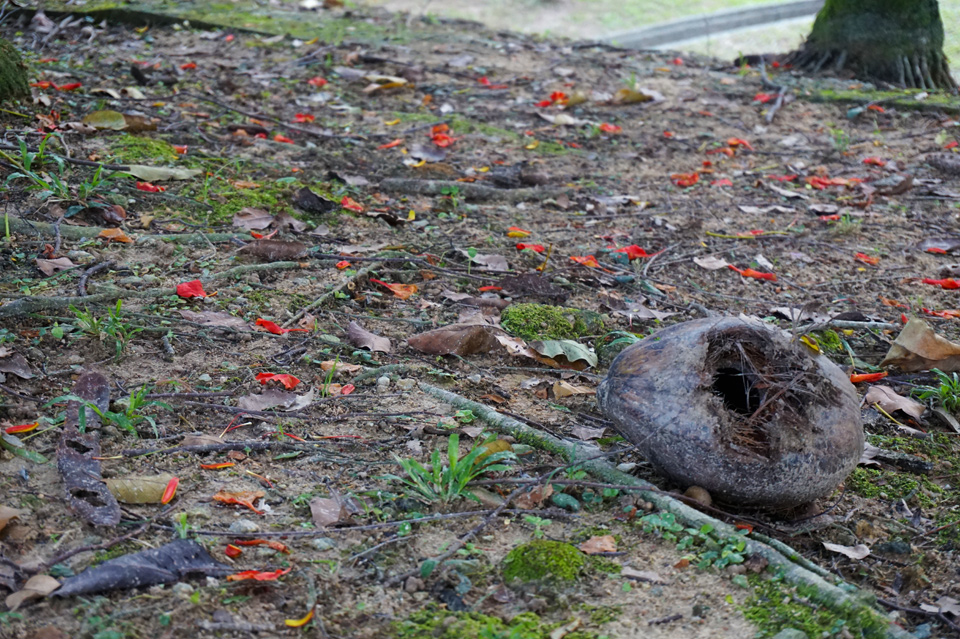 I saw these empty coconut fruits all around the park, I wonder what creature had been having a coconut party. It is a mystery yet to be untangled. 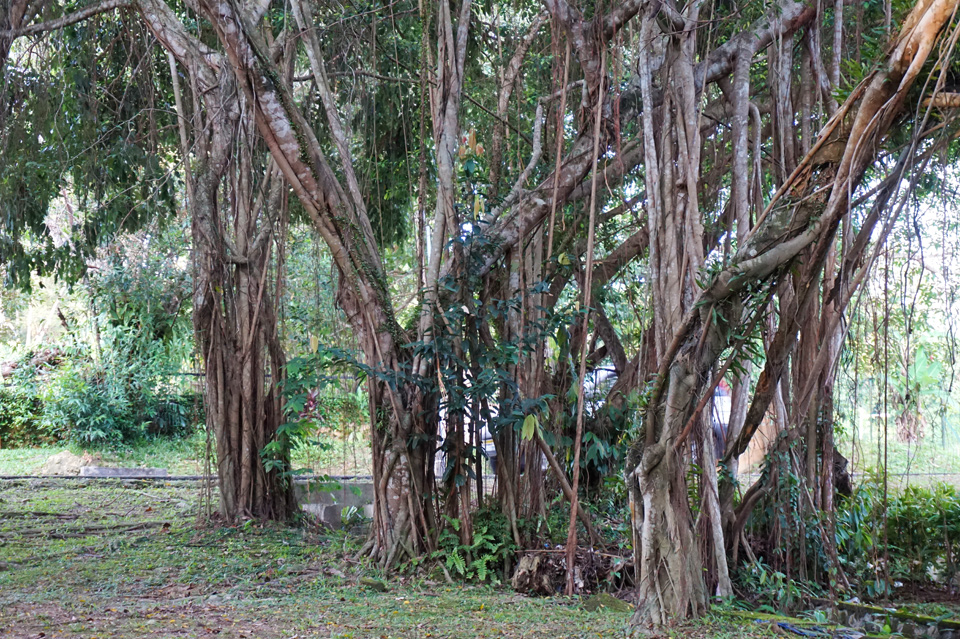 I just cannot with these gorgeous trees. My mom called them spooky again and I said to her that these trees, especially the old ones are older than us and have seen things that we are spared to see. Malaysia came to Independence in 1957 so even though I feel kind of ancient sometimes, the country is quite young. It is only 59 years old in the context of it being Malaysia. I went down these stairs that used to have water running over them and my mom said not to trip and fall. I said if I trip and fall, I will try to land gracefully. Okay, that was a lie. Mom got sweaty and she was very princessy in behavior that time I had to meditate and let it be. So I went far away from her instead. Goodness, I'm old. And still behaving like a child. I will try a mature tone in my next post. 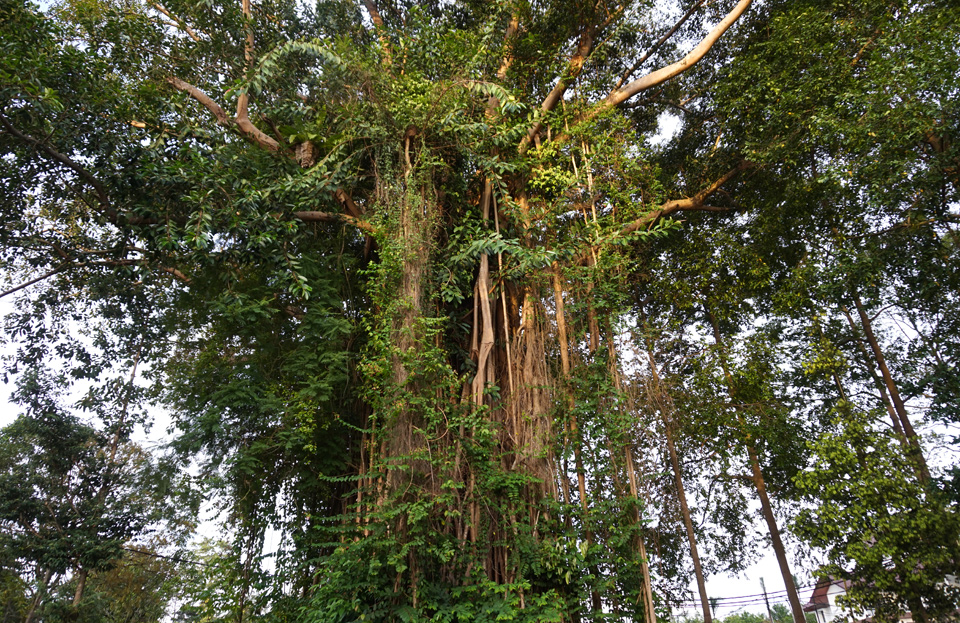 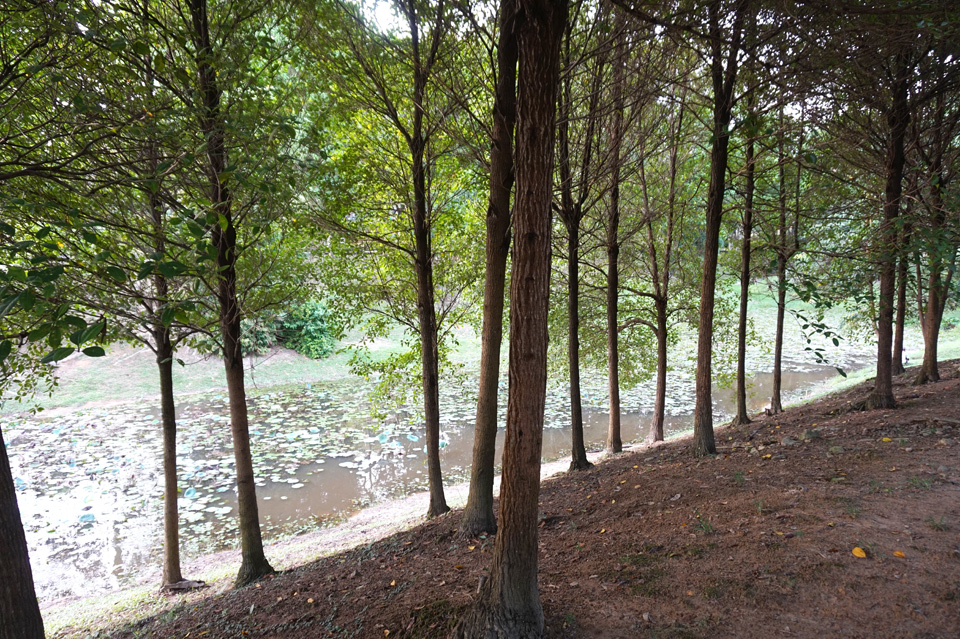 These are the younger trees that lined up the lotus-filled lake. 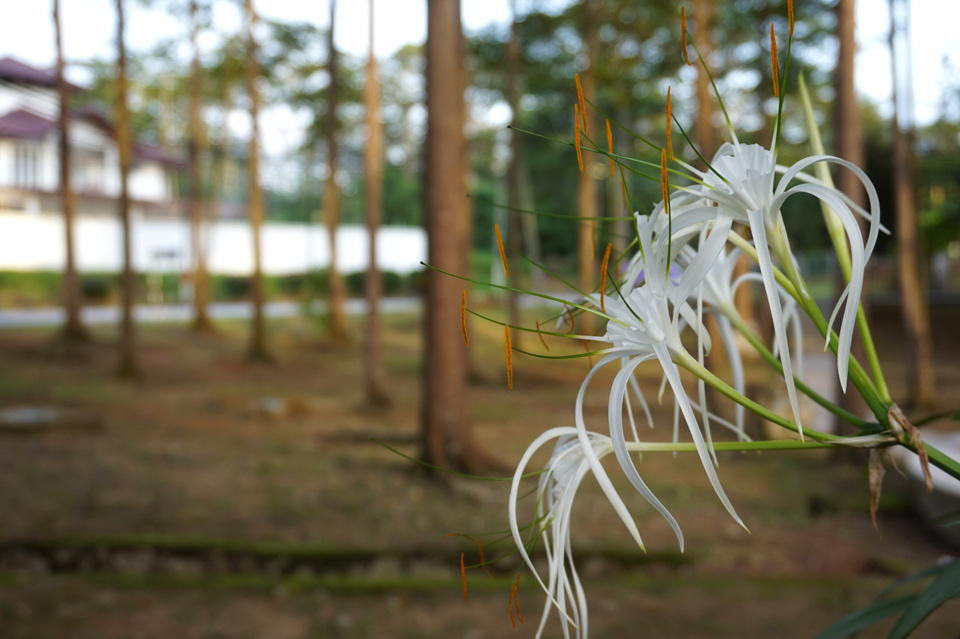 Well, what do you think of my outfit and the ancient trees that complement it? Share below! Thank you for all of your comments! I read them all and will respond!

I end this post with an Eckhart Tolle’s quote:

Do you really need to mentally label every sense perception and experience? Do you really need to have a reactive like/dislike relationship with life where you are in almost continuous conflict with situations and people? Or is that just a deep-seated mental habit that can be broken? Not by doing anything, but by allowing this moment to be as it is.