People May Appear Further Than They Are 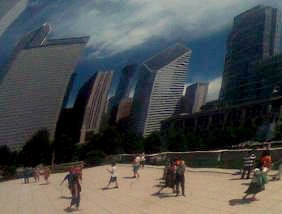 I waited. It was about an hour before we met up, when the call finally came. Then I had to call Andy to say that Paul had picked the BEAN as a meeting place. I didn't know Andy. I'd never met Paul or the gang he was bringing along. It seemed like the touristy thing to meet folks at the BEAN on the 4th of July, though.

We had these loose connections from online friends or crossing paths. By some weird star-like direction, we would gather for a beer and conversation as if we were long-lost friends.

I'd gotten ready for the call. When it came I put on my shoes and headed out the door. I wanted to be early so that I could look around. I'd only recently discovered that I could take a decent picture with my phone.

Twenty minutes early, I took my photograph reflecting off the BEAN. Then wandered to the garden and found some flowers who wanted to be part of what I was doing. One day it will be a maze taller than I am, but that day it was an amazing burst of purples, blues, greens, and an occasional red-orange. Got a few pictures before it was time to walk the gravel path back to the sidewalk that lead to the BEAN.

As I was walking, I realized I had worn my best boots to trek the gravel. I mindless wondered whether they would recover. Too late to worry. I wiped the dust off on the of my jeans.

As I walked up to the terrace around the stainless steel bean-shaped gate, a man talking on the phone smiled and waved. I said, "hello," hoping I knew him. Then, I hoped I had him pegged as the right one of the two. Luckily, the other guy phoned so that I could be sure.

We gathered, hugged, took pictures and video. Then we walked over to the local outdoor pub to share a beer and get to know who we were.

As I sat with five other with whom conversation came easily, I thought to myself, "This group is the opposite of the reflection in the BEAN."

People May Appear Closer Than They Are.