PLOS ONE: Queen Nefertari, the Royal Spouse of Pharaoh Ramses II: A Multidisciplinary Investigation of the Mummified Remains Found in Her Tomb (QV66)

PLOS ONE: Queen Nefertari, the Royal Spouse of Pharaoh Ramses II: A Multidisciplinary Investigation of the Mummified Remains Found in Her Tomb (QV66) 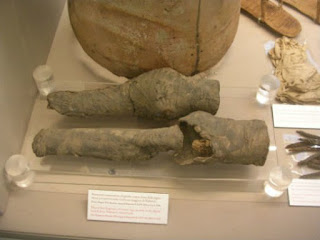 Queen Nefertari, the favourite Royal Consort of Pharaoh Ramses II (Ancient Egypt, New Kingdom, 19th Dynasty c. 1250 BC) is famous for her beautifully decorated tomb in the Valley of the Queens. Her burial was plundered in ancient times yet still many objects were found broken in the debris when the tomb was excavated. Amongst the found objects was a pair of mummified legs. They came to the Egyptian Museum in Turin and are henceforth regarded as the remains of this famous Queen, although they were never scientifically investigated. The following multidisciplinary investigation is the first ever performed on those remains. The results (radiocarbon dating, anthropology, paleopathology, genetics, chemistry and Egyptology) all strongly speak in favour of an identification of the remains as Nefertari’s, although different explanations—albeit less likely—are considered and discussed. The legs probably belong to a lady, a fully adult individual, of about 40 years of age. The materials used for embalming are consistent with Ramesside mummification traditions and indeed all objects within the tomb robustly support the burial as of Queen Nefertari.