Podcast #219: The Real Life Story of Hemingway and The Sun Also Rises

Ernest Hemingway is a literary legend, but unlike many literary legends, he gained that status while he was still alive. In fact, many already had him pegged as one of the world’s next great writers right at the very beginning of his career when he introduced his first novel, The Sun Also Rises.

My guest today has published a detailed account of how Hemingway created his first novel and in the process, created the now-iconic Hemingway Persona — a virile, adventurous, laconic wordsmith. Her name is Lesley Blume and her book is Everybody Behaves Badly: The True Story Behind Hemingway’s Masterpiece The Sun Also Rises. Today on the show, Lesley and I discuss Hemingway’s drive to revolutionize literature, the authenticity of his manly persona, and the real life party in Spain that inspired his classic debut novel. 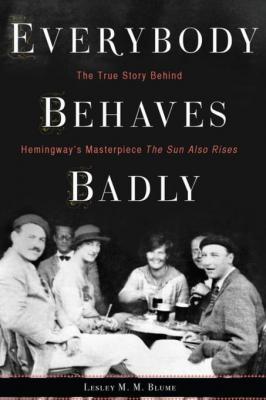 If you’re a Hemingway fan, Everybody Behaves Badly is a must-read book. Not only will you get insights into how The Sun Also Rises came to be, you’ll see firsthand how the Hemingway legend was created. Even if you’re not a Hemingway fan, the book offers a compelling and enlightening look into the lives and ethos of the “Lost Generation.”

Hostgator. Get 30% off web hosting by using code AOM30 at checkout.

Five Four Club. Take the hassle out of shopping for clothes and building a wardrobe. Use promo code “manliness” at checkout to get 50% off your first box of exclusive clothing.

Bouqs. Get the woman in your life  some fresh flowers she’ll love without breaking the bank. Save 20% off the bouquet of your choice by going Bouqs.com and enter promo code MANLINESS.