Podcast #231: How the Ghosts of Tradition Inspired Ancient Military Might

The armies of ancient Greece and Rome have gained legendary status. Both militaries successfully conquered much of the known world in their respective eras.

But what made them so formidable? Technological innovation? Novel strategies? Plain old grit?

My guest today on the podcast argues that it was the Greek and Roman armies’ reverence for their mythic pasts that made them great. His name is J. E. Lendon (he goes by Ted). He’s a classical scholar and the author of Soldiers and Ghosts: A History of Battle in Classical Antiquity.

Today on the show, Ted and I discuss how the ghosts of the Iliad and the Odyssey haunted Greek soldiers, the ways in which both the Greeks and Romans ritualized warfare, and why the Ancient Greeks made a competition out of everything. We also discuss the competing virtues of courage and discipline within the Roman army. This is a riveting conversation with fascinating insights into ancient notions of masculinity. 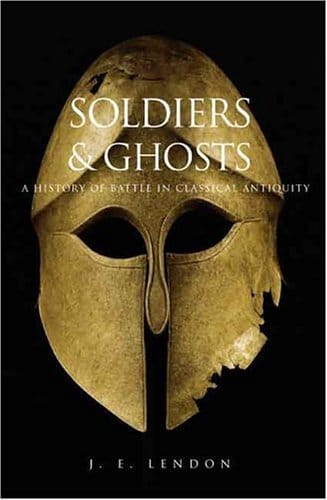 Soldiers and Ghosts: A History of Battle in Classical Antiquity is an extremely interesting and readable account of ancient warfare. You not only will learn a lot about Greek and Roman history, but also about notions of manliness within these two cultures.

DKMS. You can save the life of a blood cancer patient by registering with DKMS. Becoming a donor is quick, easy, and free. Text MANLY to 50555 or go to dkms.org/manliness.

Five Four Club. Take the hassle out of shopping for clothes and building a wardrobe. Use promo code “manliness” at checkout to get 50% off your first TWO months of exclusive clothing.

Squarespace. Build a website quickly and easily with Squarespace. Start your free trial today, at Squarespace.com and enter offer code ARTOFMAN to get 10% off your first purchase.