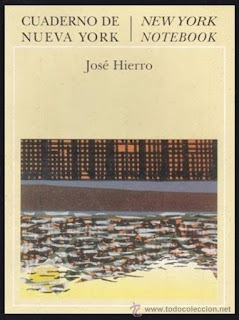 MIRROR
In other skies, in a kingdom far away,
my sorrows were seen upon my face.
Lope de Vega

THAT stranger, that new arrival
who talks to himself-he doesn´t know I´m listening-
and who asks, I don´t know whom, "why did you return?"
while he wipes away with a white cloud
the sorrow tattooed upon his face,
the claw marks caused by time,
and once again he asks, "why did you return?"
that one, the one I see, the one I´m listening to
from this side of the looking glass,
where?   who can he be talking to?

COPLILLA AFTER THE 5th BOURBON
HE though that there would only be
darkness, silence, and empty hole.
He died, convinced as he could be,
for God himself had told him so.

AFTER all, all has been for naught,
even though it once had ben for all.
After naught, or after all,
I found out that all was nothing more than naught.

Naught is all remains of what was naught.
(In my hopes and dreams what I believed was all
was really nothing more, in fact, than naught.)

What does it matter that naught has been for naught,
if naught will only come to naught, after all,
after so much striving after all for naught.

Thanks to Ana Jular and Ignacio Aller who kindly gave me this book.