Pompeii, Germany, and the Curse of Dar Kastle

blogcatalog
As part of our exploration in Busch Gardens, Germany was  the next stop.  We want to visit Europe and Germany  is one of the many places we want to see but we can't afford it yet so Busch Gardens is the closest that we did for now.  Even just roaming around  on the Germany part of the park  was quite entertaining. 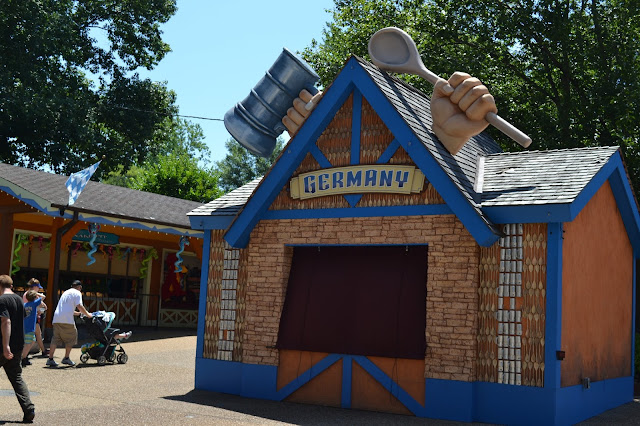 The kids wanted to  try the Curse  of the Dark Kastle so we went in. We fell in line but unfortunately we were not admitted because the kids did not meet the height requirement. 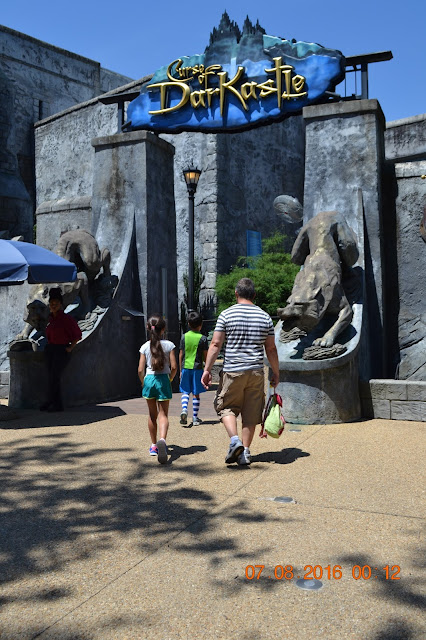 It would have been nice to experience  deep in the snow covered hills of Bavaria stands a foreboding castle frozen under the spell of a centuries-old curse. In a way, I was  relieved that we werent admitted because even though the ride  begins as an enchanted sleigh ride, it  ends in a bone-chilling chase packed with dizzying drops, surprise twists, and such sensational 3-D visuals.  I would have  peed myself  hahaha. 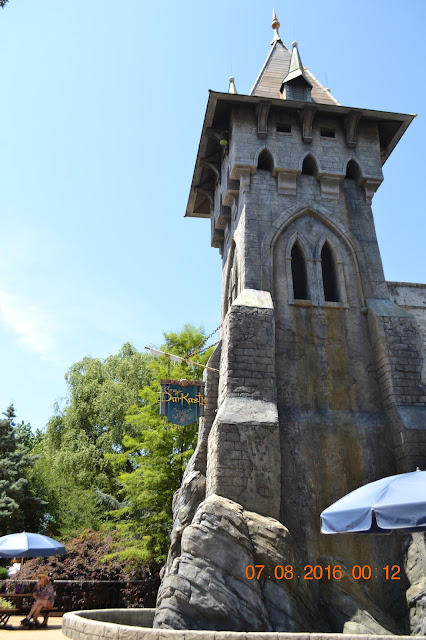 However, we enjoyed the mist outside and since it was getting so hot, we stayed under the mist for a while. 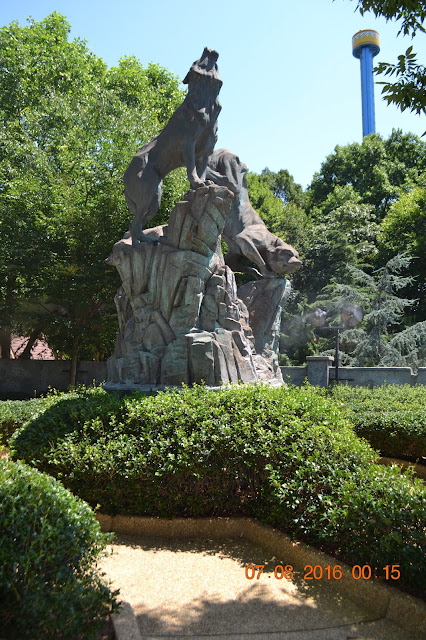 I think that the festhaus is the  room tucked inside Das Festhaus’s main hall that holds a beer-enthusiast’s paradise.  There are samples of  hand-crafted brews from around the world, with 30 rotating craft beers on draft, including seasonal varieties.  We didn't but it's worth taking a picture lol. 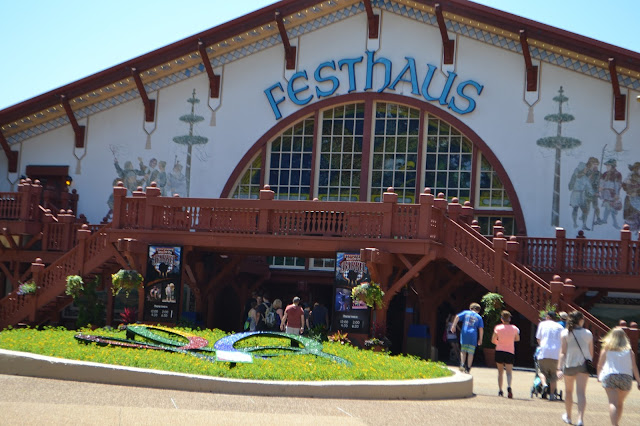 To relieve the disaapointment at DarKastle  attraction, my son rode the karousel while we sit  for a while waiting for him. 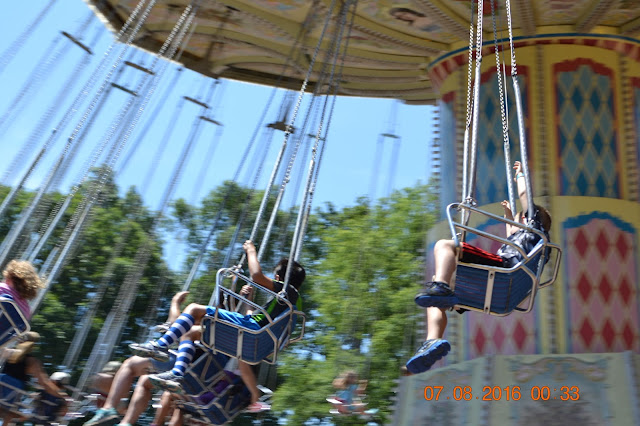 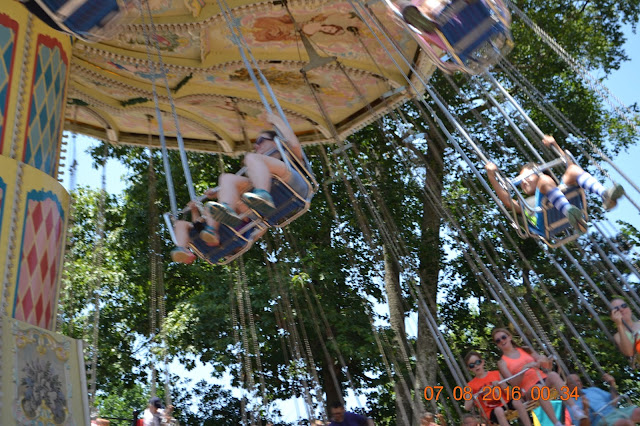 The problem with going to a huge park like this in a very hot weather is, it makes you tired really fast. 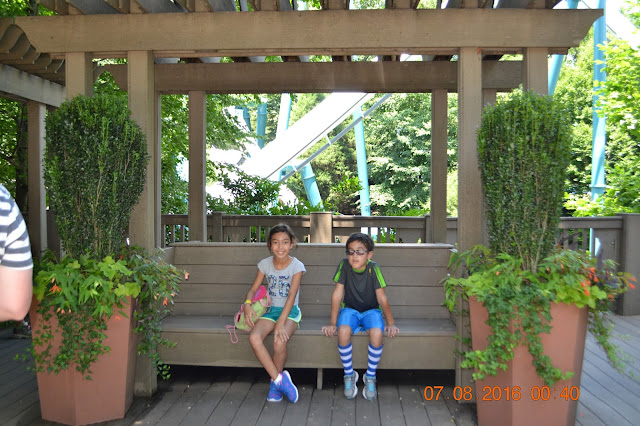 We wanted to ride the train so that we could  relax and take a break from walking a little bit but the employees told us that it would be late since they have a mechanical problem, sigh. So we walked around a little bit and then came back afterwards. 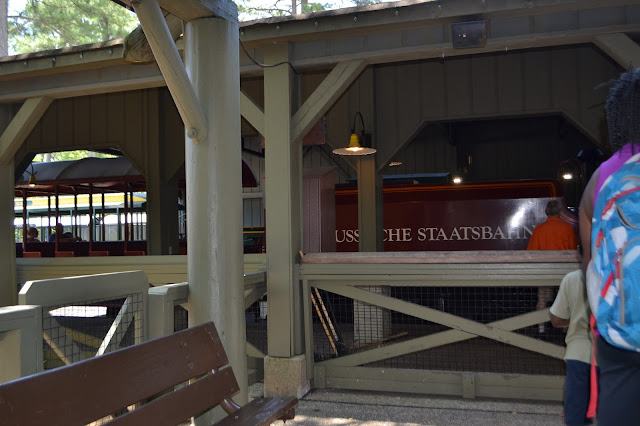 The Busch Gardens Railway is  a 20 minute trip around the park riding the three steam-powered locomotives whisk guests through 100 acres of lush landscaping with stops in Scotland, Festa Italia and New France for a breathtaking tour of the park. 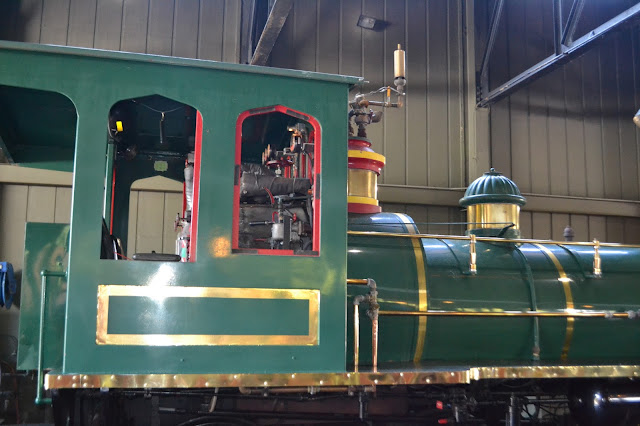 It was a fresh breath of air.  We got to look around the parts of the park that we would have not seen by walking. 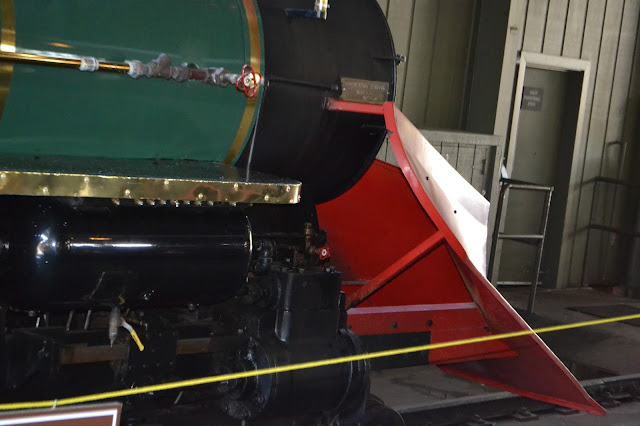 By the looks of the display at the entrance of Pompeii attraction, I got the impression that it would be a wild ride so I immediately declined from going.  My son  stayed with me  and later on, my husband came  back and did not go either because he didn't want to get wet.  My daughter was old enough to go alone although I was worried, my husband said to give her a little freedom so we let her go alone. 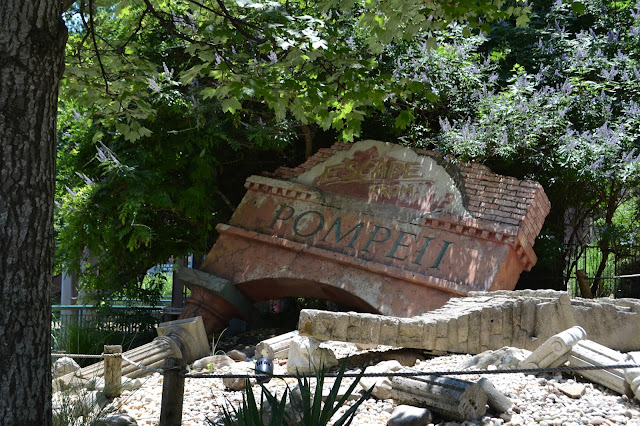 Pompeii attraction is an adventurous journey through the ancient ruins of Pompeii.  As history has it, even the mighty Roman Empire had been no match for Mt. Vesuvius, which draped Pompeii with a blanket of lava and ash, erasing it from the map for nearly 1,700 years. 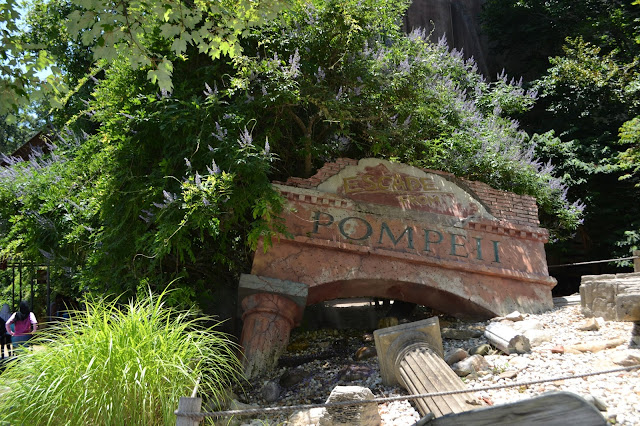 My daughter said that the ride would certainly  require you to hold on tight as a leisurely boat ride through the ruins of this great city suddenly turns explosive. 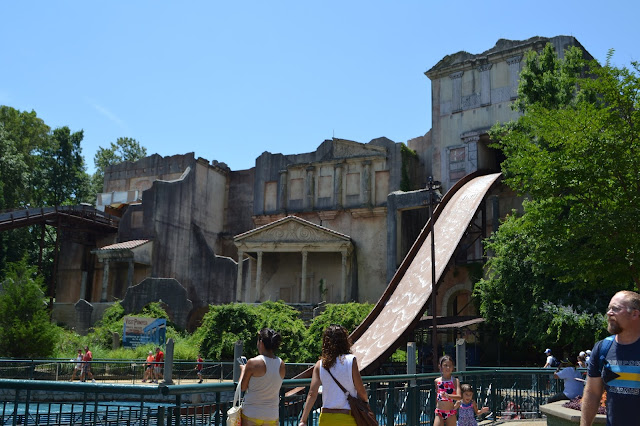 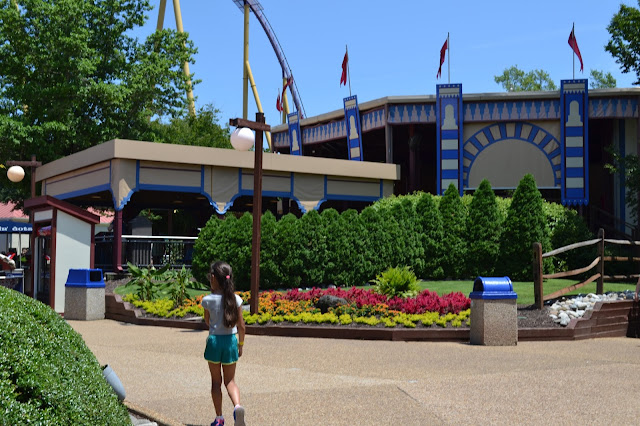 One rumble from the mighty mountain and the race to escape from Pompeii is on. 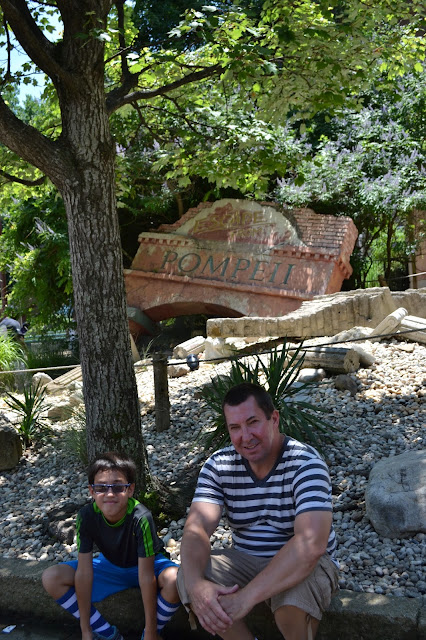 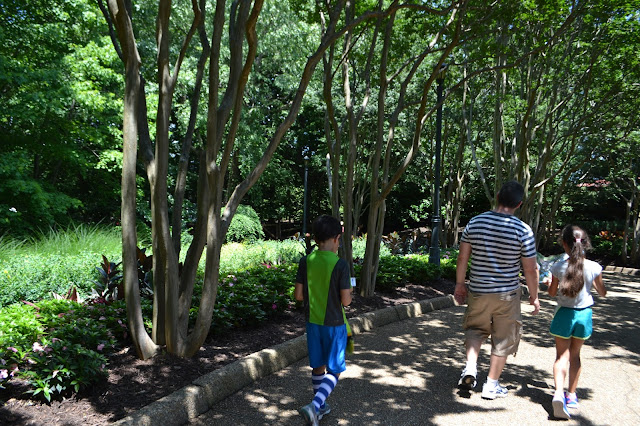 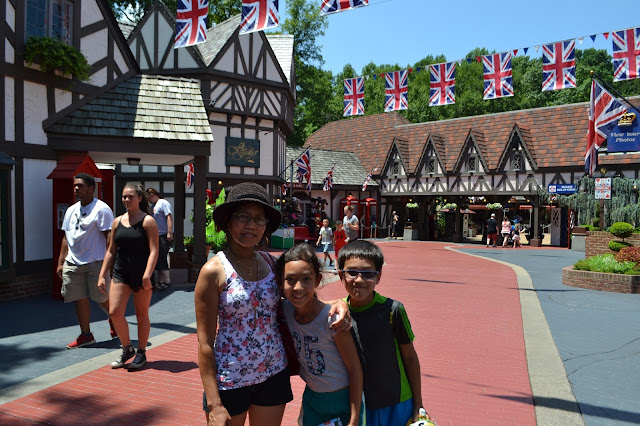 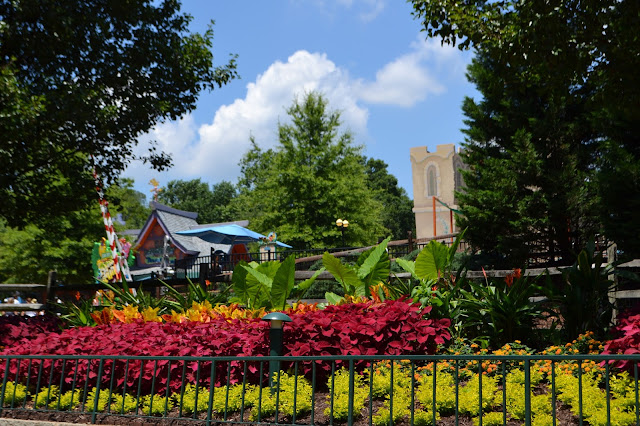 After this attraction, we decided to call it a day.  We were all exhausted not because we walk a lot but because it was so hot that day.  Our time there was when Virginia was having the heat wave so it wasn't that enjoyable to really be out in the sun all day.  We did however had some fun time while out there.
We use cookies to improve user experience, remember your preferences, and analyze website traffic. By continuing to browse this website, you consent to our use of cookies as outlined in our Privacy Policy.