Prepare for the Best- Building Optimism in Your Children 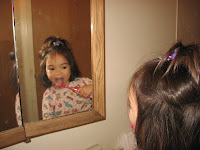 Pessimism and optimism are character traits that our children are born with. But that doesn't mean that we have to accept them! Steering our children towards optimism helps them embrace life better.

Last summer, for instance, my family took a trip to an orphanage in Kenya. Before leaving, we were all required to get several shots. Being a parent who believes in full disclosure, I told my kids when I made the appointment. Big mistake. Rebecca, my older daughter, took it in stride. Katie, my younger one, didn't sleep for a week. Rebecca laughed at her mercilessly.

Then came the big day. Katie went first, and she didn't even flinch. She said, at the end of it all, “that wasn't that bad." And Rebecca? We had to peel her off the ceiling.

Afterward, I asked both of them which was better: to worry incessantly about something that may turn out badly, or to not worry at all, and then be surprised when life kicks you in the teeth? In other words, would you rather be a pessimist or an optimist? Would you rather trust and have faith, or would you rather worry? Pessimism believes in preparing for the worst, just like my youngest daughter did. She cried, she worried, she visualized, she whined. That way, she said, there was no way it could possibly be as bad as she imagined.

Preparing for the Best is more Fun

Optimism, on the other hand, is embodied in my Rebecca who, as a firstborn, thinks she's invincible. Nothing bad is really going to happen, so when it does, boy is she surprised. She may not handle it as well as Katie, but she still emerges on the other side. I tend towards the Katie side of life myself, but in watching Rebecca, I really believe life would be a lot more fun if we all prepared for the best, rather than the worst.

Pessimistic Children Lose Out on Life

That doesn't mean we should all be carefree; just that if we're so focused on the bad that may happen, we may miss out on the good. And we're far less likely to try new things or take those big leaps because something-we're never sure quite what-may be lurking just around the corner. So we live a safe life. A comfortable life. But not a very big life.

An aversion to risk is closely related to pessimism. My Katie, as talented as she is, won't take dance lessons, though she dances around the house. She might not like it, you see. She didn't volunteer to do a solo in the Christmas play, though after watching all her friends do it, she remarked she could have, after all. And the piano competition we entered them in this year? She dreaded it, until it came time for her to play. As we were leaving, she said, “that was actually kind of fun. Can I do it again?" After listening to her whine about it for two weeks, I almost strangled her. Those kids who have a “prepare for the worst" personality need to be pushed to try new things. But once they do try these things, and the sky doesn't fall, they're more likely to do it again.

Require your pessimistic child to do at least one new thing every season. For Katie it has meant certain sports and certain competitions, but in your family it may be something else. Support them through it, encourage them, pray with them, and even quit if it becomes too much. But make the effort. The more a pessimistic child is stretched, and finds out that the world actually is fun, the more optimism can grow.

Pessimism is not a fixed personality trait. Continue to nudge your little one towards new adventures, and encourage them to aim for the sky. You just may wake up one morning to hear your child say, “I just can't wait!". And that's a moment I'm looking forward to as well!