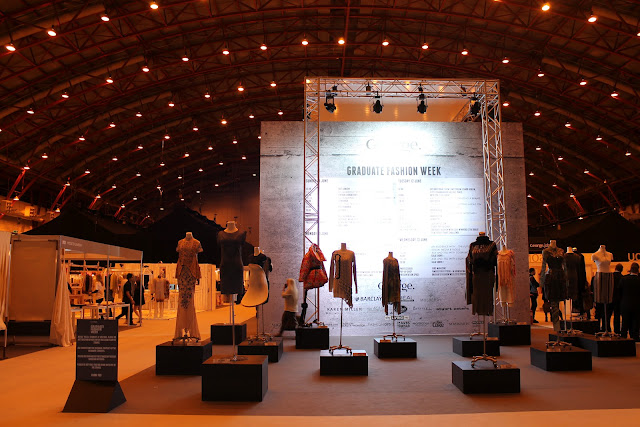 Just over a week ago the heart of my beloved capital city beat a little faster as it hosted the annual extravaganza that is Graduate Fashion Week. The charity, founded in 1991 is akin to a vast fashion harvest, selecting and showcasing the premium crop of talent yielded from many UK and international fashion colleges each year. Crucially, it offers graduates potential employment opportunities and generates a huge media focus. The show transcends from the scaffolding of a staged corporate event and becomes a pulsating pastiche of creative energies, each one powering the cogs of the fashion industry in their own unique way. Designers, journalists, illustrators, media experts and visual merchandisers all represent a vital link in the lacertine fashion interlace; unpick one stitch and one risks unravelling the structure of industry.
Upon arrival at Earls Court in the morning it was clear that the fashion massive were out in force. Parties of Amazonian models and eclectically attired individuals were patchily strewn on the paving slabs like flowers springing up from the urban concrete undergrowth.  I also accepted that I would be spending the day craning my neck and looking skyward to people two feet taller than me, (untimely confirmation if ever there was one of reasoning behind my affectionate nickname ‘shrimp’).
Once past the burly security guards I was greeted by a vast arena cloaked in fashionable gloom; the ceiling threaded with red iron lattices and spotlights beading these knotty briars like jewels. Sat proudly in the entrance were an array of award winning pieces from the class of 2011, including some stunning intricate knitwear from Rory Langdon. Gathered at the peripherals like courtiers paying homage to their monarch were the stands of the competing universities of 2012. 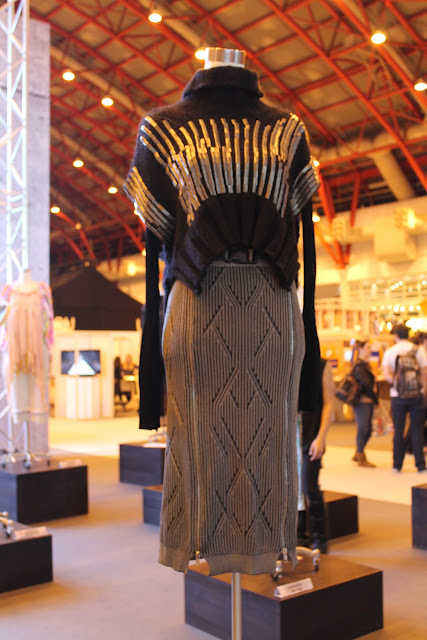 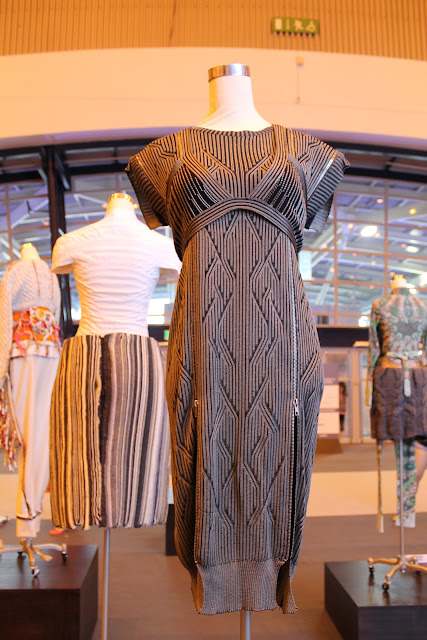 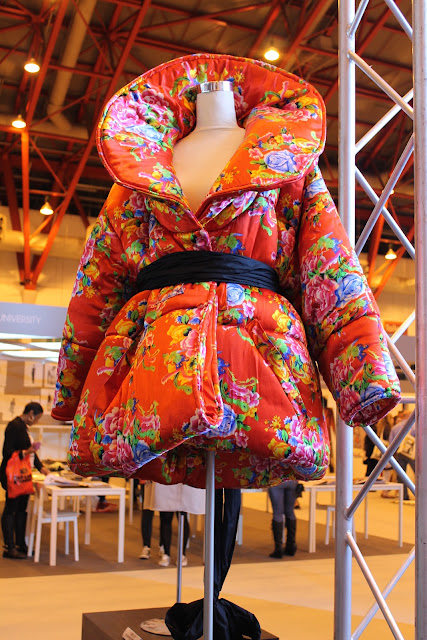 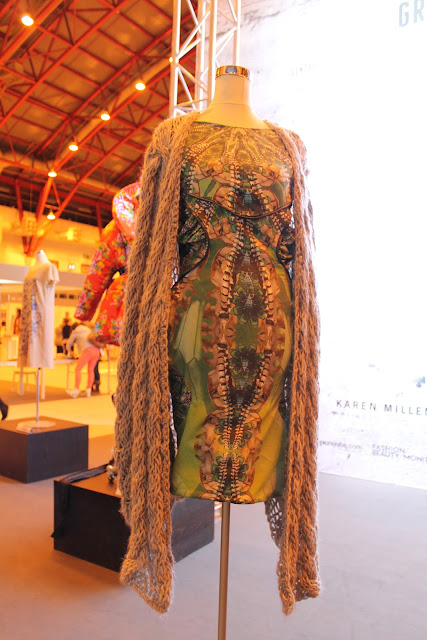 You may think that I would have made a beeline to the nearest stand to start snapping away at the fashion on show. However, I frequently betray youthful effervescence with bouts of illness and nausea, and this was no exception. Instead, I hunted down the tea marquee with all the proficiency of a bloodhound, where I curled up with a hot beverage like a deep sea crab and listened to the music thumping out of the catwalk tents. The organisers of Graduate Fashion Week clearly had had fun sourcing some innovative seating for the weary public; the tables and stools were rough, flat pack chipboard monstrosities; the kind that you like to assume are for display-only purposes and that splinter your tights when you stand up.

After an hour, and bent double like I was nursing some grievous affliction, I hobbled down to the George stand (George at Asda, the main sponsor) where a talk entitled ‘An Audience With…Best of British’ was scheduled to begin. Hilary Alexander, Fashion Director for The Telegraph and Brand Director for George, Fiona Lambert, were discussing how to improve employability, and what George looks for in potential new designers. As I was still feeling very unwell I failed to properly note-take; though the main points that were reiterated were the importance of being passionate, curious and well read on your business in order to succeed. And Hilary Alexander advised all hopeful journalists to keep writing.
Having recuperated slightly, I felt up to investigating the college stands, and was decidedly impressed by the innovation and individuality shown by certain young hopefuls; not just in their portfolio work, but in general presentation.  Patterns made from geographical maps, old army rucksacks hung jauntily from meat hooks and the billowing tents suspended over Northumbria’s stand like delicate parachutes were all beautiful touches. 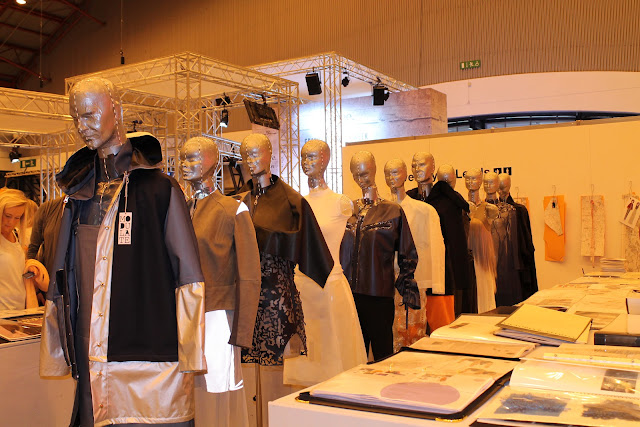 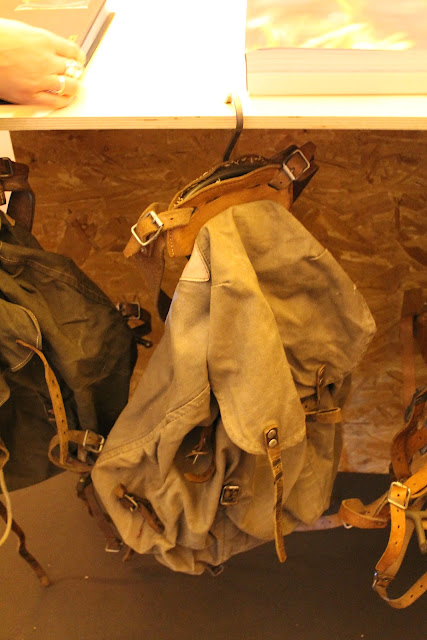 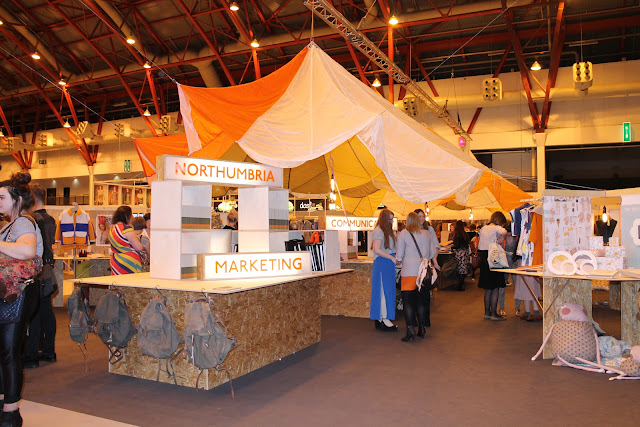 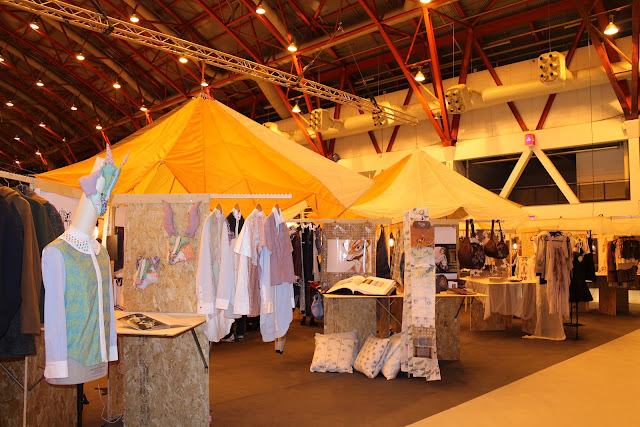 One designer who particularly caught my eye was the immensely talented and stunning textile designer Emeline Nsingi Nkosi. Emeline is a recent graduate of Ravensbourne College and was nominated for the Mulberry Accessories Award as well as the GFW Ethical Fashion Award. I was drawn to her striking, tribal inspired headwear incorporating her digitally printed organic fabrics. For her final BA collection, Emeline drew inspiration from her own heritage as well as Congolese culture. Trained in the traditional art of screen printing and with fabulous hand illustrations in her portfolio, there were so many parallels to be seen with another, legendary textile designer I had seen the week before, Zandra Rhodes. Emeline’s work simply radiated energy and individuality, but so too was it refreshing to see proficiency in many traditional skill sets sidelined in the technological age. I’ve no doubt that Emeline has a fabulous career ahead; it is little wonder Hilary Alexander tweeted her work on her preamble round the show. 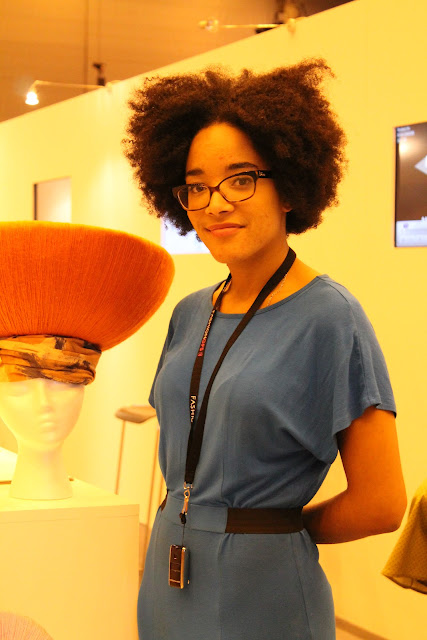 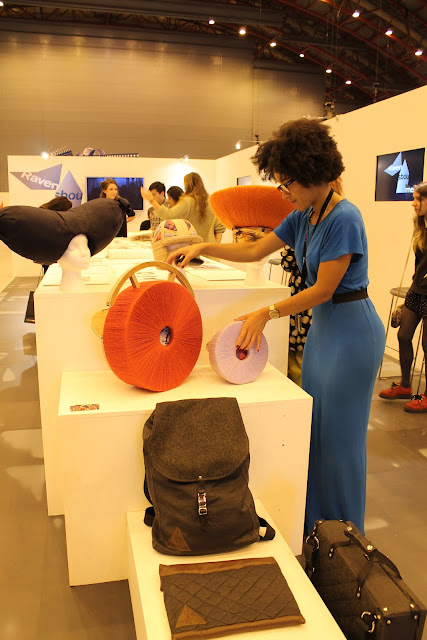 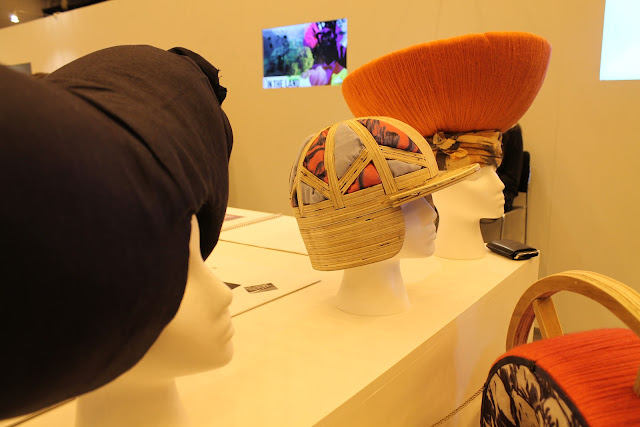 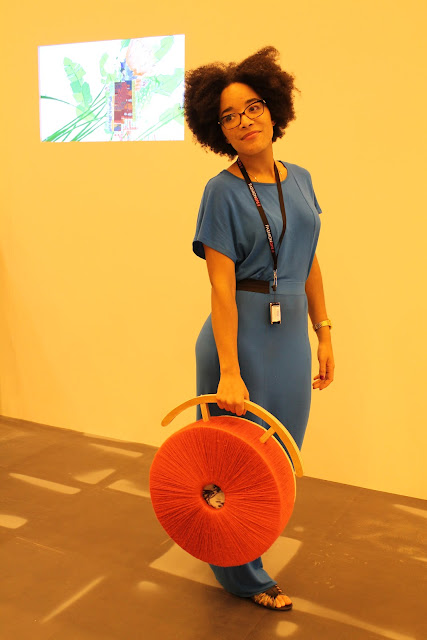 After completing a circuit around the show I returned to the George stand, where a second talk ‘MA vs Employment' was due to start. I had no hesitation in looking a keen bean as I perched right on the front bench that everyone had stealthily circumnavigated. Hilary Alexander introduced Cressida Pye of Pye and Smith and Professor Wendy Dagworthy OBE from The Royal College of Art, which made me quite excited (black sheep though I am, some artistic family members did attend the college). I had already beadily spotted Professor Dagworthy earlier on; her elegant silver topknot, piles of silver jewellery and face full of wisdom cut a striking silhouette in the crowd.

A well balanced argument was presented for each case as to whether a student should choose an MA course or the employment route, and it was pleasing to see common ground between the two industry experts. Both Cressida and Wendy emphasised the importance of depth, not breadth in sketchbooks and portfolios, the eminence of illustration talent, and maintaining your individual work patterns.
Professor Dagworthy’s reminiscing on talent spotting Erdem and Christopher Bailey of Burberry proved immensely enjoyable. She proposed that there was something decidedly innate within these individuals that could hold the attention of an unsuspecting audience just as if they possessed magical powers; whose aura emanated talent, strength and determination. An air of mystery too perhaps. Using the label creative ‘genius’ here is tempting; though I do believe that once we assign an individual that status we can so often limit and damage their potential to do great things. But there is no doubt that those two were destined to do just that.
I’m not sure if I entirely agreed with Cressida’s statement that businesses don’t look at the venture of starting one’s own business as the best experience for future employment. Technical skills can be learnt on the job from other professionals, just like apprenticeships, and the environment of free, unbridled creativity and urgent pace can really catalyse the natural potential of budding designers. My favourite quote from Cressida, and from the whole day, was her philosophy on exactly why some of Pye and Smith’s employees were so efficient; because “a tough education makes students oven ready”. I couldn’t agree more with this statement, though you’ll be pleased to know that on this particular occasion, I won’t digress to exploring the limits of British education. 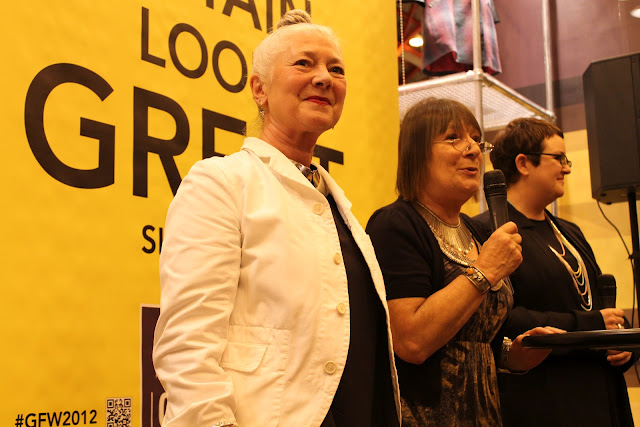 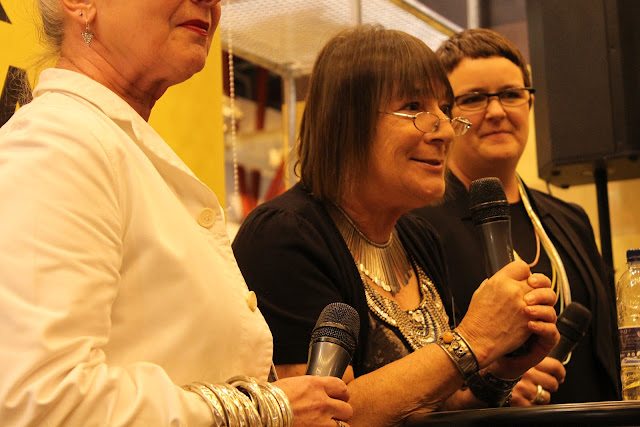 My day ended on a lovely high as I queued for the Northumbria Fashion Show at around five thirty, where I also met the lovely Jennivi Jordan, a young fashion stylist.The dutiful fashion students had gone to the effort of taping a little gift bag on the back of each seat. Much to my amusement my complimentary gift was a tiny pair of Gilly Hicks knickers, outrageously labelled ‘Medium’ even though they would have been a snug fit on a five year old.
Northumbria showcased a strong array of menswear, an indication of the scope emerging to rival the innovation and individuality shown abundantly in womenswear. The show opened with a breathtaking futuristic stance on menswear by Emily Edge, boasting vibrant digital printing and razor sharp tailoring which rightfully won her a Gold Finalist nomination. The return of Nineties chic was reflected in Chloe Horsfield’s menswear which featured technicolour patchwork sportswear, bomber jackets and knitted beanies. Meanwhile the influences of Russian architecture were clear in Amelia Smith’s sculptural womenswear collection, characterised by distinctive bell shaped dresses and intricate monochrome patternation, which resulted in a nomination as Textiles Finalist GFW 2012. On Gala Day, Sarah Murphy of Northumbria also won the New Ethical Award presented by eco-diva Livia Firth. 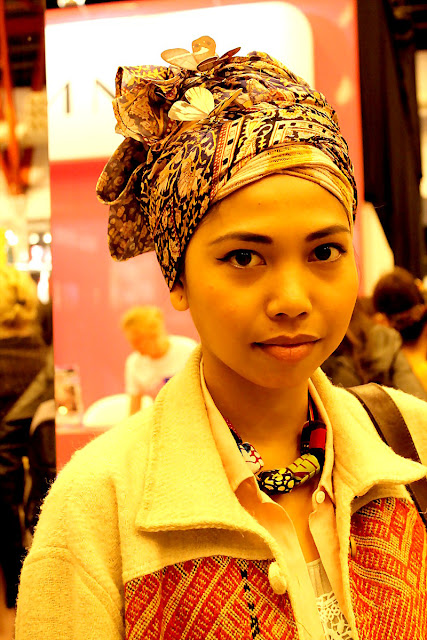 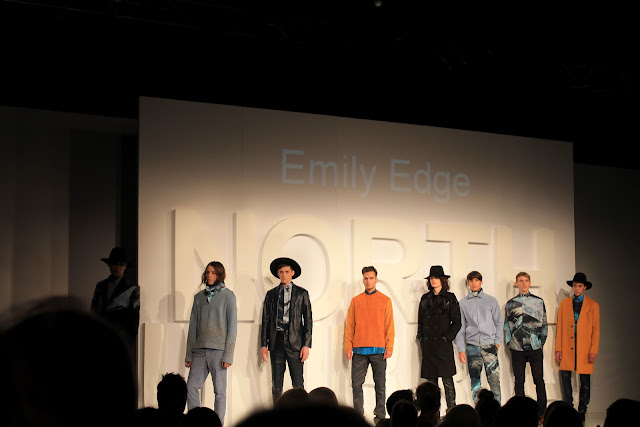 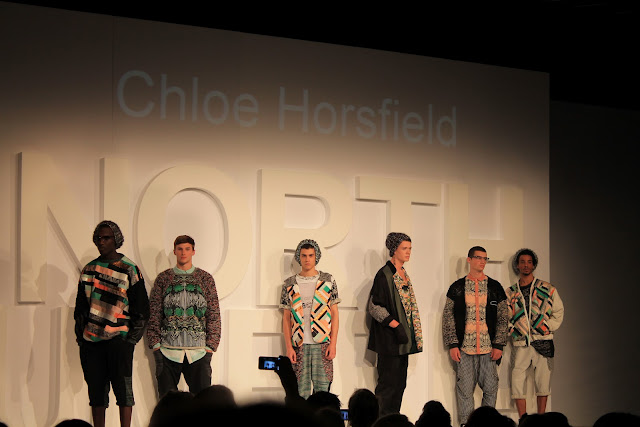 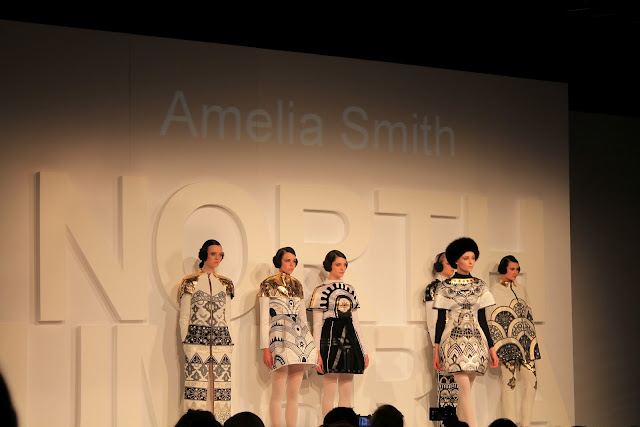 As the swell of the crowd tided out into Earls Court, I so too ebbed away into the warm evening sunlight; tired, achy, but somewhat reassured that the future of British design and manufacturing is surely set to make a comeback. It may just have begun.
We use cookies to improve user experience, remember your preferences, and analyze website traffic. By continuing to browse this website, you consent to our use of cookies as outlined in our Privacy Policy.