Profile: Meet Teresa Rhyne, author of The Dog Lived (and so will I)

Due out in October of 2012, Teresa Rhyne's debut memoir is a book about triumph over the hurdles that life continually throws at us. I was one of her Beta readers and fortunate to be somewhat on the "inside", and so privy to her writing process as she worked on the final draft of her manuscript. I found it amazing that she could write with such clarity about about a subject that could have been devastating. Her humor and warmth come through loud and strong on every page.

Having gotten to know Teresa by working with her on line, my impression of her is one of a strong, courageous and loving woman who is capable of pulling up her boot straps when under fire and forging through what ever it takes to get the job done with humor, grace, and loyalty to those around her, including her dog Seamus...qualities we all hope we have. Her writing ability is evident in this poignant memoir. 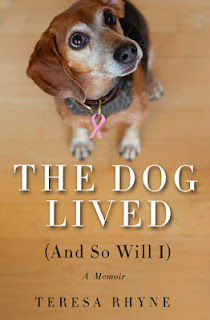 "The Dog Lived (And So Will I)...is a tale of a dog who wouldn’t let go and the woman who followed his lead. It is the uplifting, charming, and often mischievous story of how dogs come into our lives for a reason, how they steal our hearts, show us how to live, and teach us how to love.
Teresa Rhyne vowed to get things right this time around:  new boyfriend, new house, new dog, maybe even new job.  But shortly after she adopted an incorrigible beagle named Seamus, vets told Teresa that he had a malignant tumor and less than a year to live. The diagnosis was devastating, but she decided to fight it, learning everything she could about the best treatment for Seamus. She couldn’t have possibly known then that she was preparing herself for life’s next hurdle – a cancer diagnosis of her own. Teresa and Seamus would battle for their lives together, while at the same time she’d bare her heart for a seemingly star-crossed relationship." (taken from blurbs on back cover).
Teresa' Story

"When I found out I had cancer I said to Chris (writer, significant other...) If I die, given that Seamus lived, you have to write the memoir The Dog Lived. I love the irony. Seamus...was diagnosed with cancer more than 3 years ago and ...I was told, Seamus still doesn't know, that he would live maybe a year. Instead he's cancer-free and well into remission. That would be the great irony of my life story--the dog lives. I don't. Not surprisingly, Chris was not amused and did not want to write that memoir. Oh, and my prognosis [was}not at all that grim. So instead, in a rare mood [I attempted] to just put a positive spin on things. The Dog Lived...and so will I."

Book Trailer
Struggle with wigs
As a result of her Chemotherapy, Teresa lost her beautiful hair. "... Buying a wig should have been easy, but it wasn't...I just completely stumbled over it."  I am pretty sure buying and wearing wigs  isn't easy for most women who have had to face the same challenge. But Teresa took up the challenge and managed to wear them with style. I've included three pictures of Teresa in wigs, one blond, one brunette and a third flaming red. I think she's beautiful in all of them.
If you had to choose, which one would you pick?