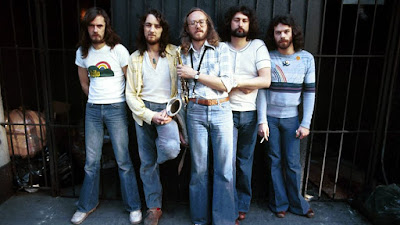 Today’s song is A Soapbox Opera by Supertramp, performed in the video below by co-founder of the band Roger Hodgson with a full orchestra.

The song is really about finding meaning in religion, specifically in Catholicism, which I’m sure that many Catholics struggle with.

I am a lapsed Catholic, if such a thing exists. My mother is Catholic but my father wasn’t. My mum’s parents were also Catholic, particularly my grandad who made sure that my mum, an only child, attended everything that the local church threw at them.

I don’t know for sure, but I imagine that he wasn’t very happy when my mum announced that she was going to marry a non-Catholic. From what I remember of him, he was a very strict and principled man and most if not all of his principles came from Catholicism.

My dad was a good man so I can imagine him sacrificing a lot to marry my mum. In the end, he agreed to live next door to my mum’s parents and also to get married in the Catholic church, agreeing to raise his kids as Catholics.

He left that chore to my mum who made sure that my sisters and I were immersed in Catholicism from the day we were born. We had to attend church every Sunday, every Feast Day as well as taking part in extra-curricular activities that the church organised.

We went to a Catholic infant and junior school where again we were immersed in the religion. From baptism all the way to confirmation, via first confession and Holy Communion, Catholicism was stitched into my psyche. I could and still can recite several parts of the Catholic mass in Latin, such is the manner in which they were entrenched.

I suppose I started to question my religion when I left the Catholic junior school for a non-Catholic grammar school, which claimed to be the best school in my home town of Walsall.

Why did my mum allow this?

Mainly because I passed an exam called the 11 Plus and this qualified me for a school that was sought after by most parents in my town. The school used the 11 Plus as a means to pick the most intelligent kids. If I had failed the exam I would have had to attend a Catholic secondary school.

As I got older, I stopped going to church, much to my mum’s dismay. My grandparents both died before any of this happened and I imagine that my grandad would have intervened.

Nowadays, I only mention that I am Catholic when asked or when I decide to mention it in a blog post such as this.

I do wonder what my grandad thinks of all this.

If Catholicism is to be believed than my grandad will be watching from afar and shaking his head in disbelief at my lifestyle choices, particularly as I no longer go to church and openly question religious beliefs.

He may be impressed that I have actually seen Pope John –Paul II in the flesh when he visited Liverpool in 1982. In fact, that was the last time I openly defended Catholicism. A good friend of mine began mocking me when I returned from seeing the Pope drive past in his Popemobile.

At the time, I felt like I had merely seen one of the most famous people in the world. However, my friend asked, in a mocking manner, whether I felt “spiritually uplifted” having seen God’s representative on Earth in the flesh.

Actually, that’s not true. I didn’t specifically defend Catholicism; I defended religion in general. What I actually saw as the Pope drove by was a lot of happy people. I told my friend that belief in a religious system can help people come to terms with all of the nasty things that happen in life. Some people did feel spiritually uplifted by seeing the Pope and these are the same people who will feel the same when they go to church every Sunday.

And it doesn’t matter what your religion is.

Yes, there are nutters out there who use religion as an excuse to create havoc and catastrophe but these people are the minority. Sadly, they get the most publicity. You only have to look back in history and you can see examples of the abuse of most religions to control people and cause harm.

Yet at the same time, I see people who are happy and content solely because of their religion. I am talking about Catholicism, Christianity in general, Islam, Sikhism, Hinduism etc. etc.

I do not regard Scientology as a religion by the way.

A prime example of what I mean is when Mrs PM’s grandfather died. He and his wife were “born again Christians” and had converted to that religion about twenty years before. Mrs PM and I immediately went to visit her grandmother. I walked into her house and immediately hugged her and said

She looked up at me and said, with a smile:

Her religion helped her overcome her grief because, in her eyes, her husband was now in Heaven waiting for her in Paradise.

Yes, I am sceptical about this, but in that moment, her words confirmed the point that I had made to my mocking friend.

Religion provides comfort and belief and for that reason I won’t dismiss it - though I still hope God has a sense of humour and can forgive the times I’ve mocked religion in the past.