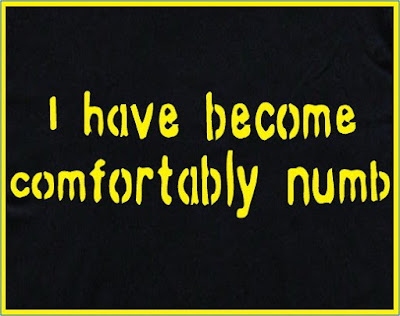 There is a common misconception that this song is about drugs, particularly if you watch the video from the movie, which shows attempts to revive the main protagonist, played by Bob Geldof, who appears to be in a drug induced stupor.

Instead, claims Roger Waters, the guy who wrote the song, it is about a state of delirium brought on by illness – and the lyrics do confirm this could be the case.

Regular readers will know that I am a bit of a hypochondriac and have almost made myself ill on one or two occasions simply by reading symptoms of diseases, illnesses and ailments and convincing myself that I actually suffer from them.

I am largely over this now because I have trained myself to avoid reading about such things and as a result I live in blissful ignorance of all of the nasty little bugs that can render me useless.

Part of the problem is that I am rarely ill.

As a kid I caught everything going, but thinking about it, so did everybody else. I had mumps and measles but somehow managed to avoid chickenpox, despite my friends, sisters and even in later life, my kids succumbing to the disease.

I’ve had flu once.

I knew it was flu because I could barely move for a week. I spent several days in bed, drifting in and out of sleep, barely able to find the strength to eat or go to the toilet, opting to crawl to the bathroom when it became necessary. It was a totally unpleasant experience and, I guess, the closest I have ever been to being comfortably numb – although the truth is that I was uncomfortably numb.

I have never taken drugs, if you discount alcohol that is, so I’ve never been in a situation where I’m delirious, hallucinating or high on a weird powder. Also, I’ve never smoked although I have to confess that I did try it one time. I was at university and drunk. A friend offered me a cigarette and I stupidly took it and had a quick puff.

“That’s not what you do,” he said laughing. “Take the smoke right down into your lungs.”

Like an idiot, I followed his instructions and something terrible happened. My entire chest felt as if it were on fire and my mind was enveloped in a wave of dizziness which, when added to the effects of alcohol, triggered a rather nasty physical reaction.

I was in a night club at the time and I somehow managed to get to the toilet just in time to puke my guts up. Everything I had drunk and eaten for the past couple of hours was hurled into the toilet bowl and accompanied by a weird blue fog as the remains of the smoke I had inhaled also decided to leave my body.

That cigarette left me in a bad place and I promptly left the night club and returned home, vowing never, ever to allow a cigarette to approach my lips again.

Thankfully, now we have a smoking ban in the UK, I rarely have to even smell the stuff. In days gone by, a trip to a pub usually meant that the following day my clothes would stink of stale cigarettes. Pubs are now smoke free and I can tell the difference just walking into the places.

I often wonder what years of passive smoking did to my lungs. I can only hope that all of those years where we had to endure other people’s smoke didn’t have a bad effect.

I would look it up on the internet  but, being a hypochondriac, I think I’ll resist.