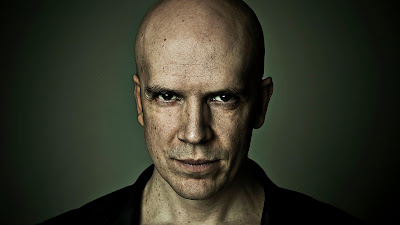 Today’s song is by my current favourite artist, Devin Townsend. The song is called Bend it Like Bender! and is a very catchy song featuring the amazing Anneke van Giersbergen as a co-vocalist.

Devin Townsend’s music is more towards the Progressive Metal genre but a lot of his music is unique and experimental. In many ways when you hear a new album you aren’t always sure what you are going to get.

This song has elements of dance music in it, particularly the chorus and I can imagine it being played at a rock party to get people up onto the dance floor.

I would certainly join in.

I pointed this out to Mrs PM on New Year’s Eve when we were getting ready to go out. We were accompanied by my eldest lad and his girlfriend and decided to have a few snacks and a glass of prosecco before departing.

Mrs PM wanted to take control of the music. I stepped in.

“You are not taking control of the music,” I insisted.

“Why not?”  she said standing in front of me defiantly.

The first reason I gave was obvious. I simply do not like her music. I cannot stand listening to dreadful dance music with one dimensional lyrics that cover one of two things. These lyrics are either about chatting up members of the opposite sex whilst dancing and using the most innuendo driven hints known to man. Or alternatively, they discuss in sometimes graphic terms, the end result of successfully procuring a member of the opposite sex and the antics the two of them get up to in a bedroom afterwards – usually all night long. Don’t get me wrong; heavy metal and rock songs occasionally do the same but at least they cover other subjects too. Rush, for example, have only one song with word “love” in the title and that is from well over one hundred they have written and recorded.

My second reason was more in keeping with the company we were with. My son likes a wide range of music but he particularly loves rock music and heavy metal (heavier than the music I like in some cases). His girlfriend also likes some rock music including, bizarrely, “screamers”, which is heavy rock where the singers scream rather than singing. Again, in this case, her taste is closer to mine (although she does like some dreadful nonsense too).  Basically, Mrs PM was outvoted because the three of us hate Britney Spears and Rihanna.

My final reason was purely selfish. We were going to a large pub that would clear a huge area as a dance floor and allow people to strut their funky stuff for hours. The problem was that this music would be the kind of drivel you get all the time with terrible dance music, the odd old dance song and, if we were lucky, a vaguely interesting rock song. In short I would have to endure hours of music that I despise – as I usually do.

Mrs PM stared at me then looked around at my lad and his girlfriend for support.

Mrs PM caved in and allowed me to control the music for an hour.

The good news for her was that I played music from across a few genres, including the song above as well as pop songs, rock, a smidgeon of metal, a pinch of dance music (for Mrs PM) and a soupçon of indie, punk and funk.

Later, I was chatting about how radio plays terrible contrived one-dimensional and repetitive music. I vowed to give up ranting so this was my final rant of 2016.

“I would love to be a DJ,” I said. “I would play all sorts of stuff. I want to be the John Peel of Manchester”.

John Peel was a bit of a hero of mine because he basically played music he loved rather than the playlists that the radio stations wanted him to play.

“Why don’t you create a podcast?” said my lad's girlfriend.

And do you know, I think I might consider doing that in future. I know a guy who does exactly that. He is a super cool person but his musical taste and mine are polar opposites. In fact, he sometimes reads this blog if you have any suggestions, let me know (you know who you are).

After all, I have almost 7500 songs in my collection and there are vast oceans of music out there in cyberspace to fish from.