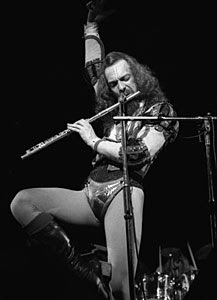 I’m pretty sure that Jethro Tull’s main man, Ian Anderson, wouldn’t like his band to be called a progressive rock band but sadly for him the powers that be have already etched their name in stone to the list of progressive artists.

As with the yesterday’s post, the song is about the end of a relationship so I’m not going to talk about that topic again.

Slow marching bands are also associated with funerals and the first thing that leaps to mind is the opening scene of one of my favourite James Bond films, Live and Let Die:

The scene always makes me smile because the whole elaborate event is staged just to kill a spy. Of course, in reality, the poor spy would just have been taken out without having staged a fake funeral just to cover the crime.

James Bond films are famous for being over the top and I love that. Sadly, they also make me wince because the villains always have the opportunity to kill 007 at least twice during the movie and, somehow, he escapes with his life.

The Austin Powers movies take this to the extreme and only Dr Evil’s son points out the stupidity of not killing the hero immediately:

“Mr Bond, you turn up with the tedious inevitability of an unloved season."

“Mr Bond, you defy all of my attempts to plan an amusing death for you.”

Why the hell didn’t he just kill Bond with a gun when he first clapped eyes on him? Some villains have come close but never managed it.

Even Goldfinger bottled it with the laser beam.

If I were a villain in a Bond movie (and I could be because I’m English have mad hair) I would shoot him myself as soon as my henchmen had him tied up.

My final words would be simple: “Goodbye Mr Bond!” and I would ignore everything he said.

To be honest, it would make a terrible Bond movie and, of course, it would be the last one.

Nevertheless, it would enable me to turn the tables and start a franchise where the bad guy, i.e. me, has to thwart attempts by other agents who are Licensed to Kill from actually trying to stop my plans for world domination.

James Bond would be the first to fail and I would come against a new double O agent in each movie.

And I would have a fantastic bad guy name, something like Axel Rampage.

It’s a well-known fact that bad guys have more fun and since I have been constantly overlooked in the Bond franchise, you can consider this my challenge!

Do you think my idea has legs, dear reader?