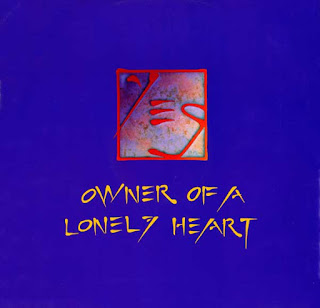 Today's song is Owner of a Lonely Heart by Yes.

I love this song because it combines early 1980’s pop music with a progressive rock feel.  Here it is:

The song is about taking control of your life, rather than just allowing yourself to drift without questioning anything. I’ve certainly been guilty of this at various times during my fifty four years.

What is bizarre about this is that we all go through phases when we question, and act but also we just slot into role that society expects of us and conform with expectations.  I know that I am guilty of this.

Certainly as a child, I questioned everything. I wanted to know everything. My grandad bought me a brilliant book for Christmas containing the answers to 100 questions that every child asks about a variety of subjects, questions like “What is the biggest number?”. The reason he bought it was because I was constantly pestering him from simple questions like “Why is the sky blue?” to more awkward questions like “When will Nanna have another baby?”

The book was fascinating and as a seven year old I soaked it up. I still remember the answer to the question “What is the biggest number?” because it introduced me to two concepts.

First that there was a huge number called a “googol” which has a value of 1 followed by 100 zeroes.

Does the name sound familiar? The company Google is a misspelling of the word. It was originally meant to signify that Google could provide huge quantities of information – which of course it can via its search engine.

Secondly, I was introduced to the concept of infinity. The true answer to the question is that there is no largest number because if you were to find it, you could just add one to make a new largest number. This opened a door in my mind and I became fascinated with maths (if you are American, I mean, of course, “math”), steering me in the eventual direction I took in life.

Of course, when I went to school I conformed until my hormones kicked in and made me question everything again. I wasn’t a pleasant adolescent; I became a rebellious arse who didn’t like the rules but had to stick to them. I asked questions like “Why can’t I tell the teacher he’s a cretin?” and “Why do I have to do what you tell me to do?”

Over the years, I have taken a few chances and broken out of the drudgery that life expects me to adhere to. A controlled population is, after all, an easy society to deal with. Yes, I got a job, got married, had kids, bought a house, paid my taxes, went on holiday, blah blah blah, but there were a few blips along the way, like getting divorced.

Yet, as I get older, the non-conformist rebel is surfacing more and more and I find myself questioning the shackles that bind me again. I am desperate to escape the rat race and have been doing so for about ten to fifteen years now.

It’s not that I hate my job. In fact, when I think about work, I have a bittersweet relationship with my career. It has allowed me to travel the world and provided me with everything I have now. Yet at the same time, it has been like a sort of open prison where I have had to go to an office for almost 240 days a year since I was 21 years old and have to listen to certain people, a few of whom I have had  little respect for.  I love the social aspect of work and have made many friends over the years.

The problem is that now I’m bored with my career and want to do something else – I want more freedom. I don’t want to have to justify everything that I do for a common goal that rewards certain people more than others. The rebel has been trying to surface to get me to take a chance. As the song says: “Prove yourself, you are the move you make, take your chances, win or loser”.

Never mind. I am now fifty four years old and as the days go by I care less and less about my job. I can see a light at the end of the tunnel and the one remaining shackle to complete will, within disappear within the next decade.

The rebellious adolescent is speaking to me again – and I love it.