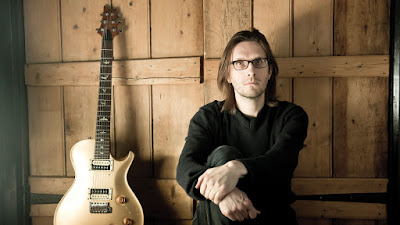 My favourite artist over the past couple of years is Steven Wilson, the man behind Porcupine Tree. Today’s song is called Insurgentes, the title track of his first solo album:

Steven Wilson has a great ear for melody and his more mellow songs are simply beautiful, as you can see from today’s choice.

A lot of his music has an underlying theme of melancholy and some of the subjects he sings about are quite dark. For example, the theme of his most recent album is based on the true story of a young woman who moved to the city and disappeared without anybody noticing, despite the fact that she had friends and family. She had died in her bedsit in London and her body lay undiscovered for two years.

When I hear stories like this I am deeply saddened and I wonder how the poor woman could possibly have been missed for so long. If this had been a work of fiction I would have been sceptical about such a thing happening.

But it wasn’t fiction at all and that exposes a massive flaw in the way society functions.

One of the points about the story is that if you live in a small community then everybody seems to know you whether they are your friends or not. I have seen this myself in small villages and towns I have visited.

Small places seem friendlier in many ways. For example, you can stroll into a pub in a country village and immediately local people take notice of you because they don’t know who you are. The same happens in shops and many people will strike up a conversation to find out about you, perhaps wondering if you are going to become a local yourself.

Small places have more of a sense of community and people bond with each other more than they do in a city.

If you live in a metropolis such as London or Manchester, the chances are that you will join millions of others shopping in a huge city centre, eating in one of numerous restaurants throughout the urban sprawl and drinking beer in a variety of pubs in different neighbourhoods. If, like me, you wander around the city you rarely bump into people you know while you are out and about especially the further you go away from your own home.

The point is that in a city like London you can be anonymous whereas in a small community this is more difficult.

At my current time of life, I am still captivated by cities and exploring the place is better if you are anonymous. I know a lot of people in Manchester as you would imagine but there are two and a half million people living within the metropolitan area and it is impossible to build such a sense of community. Manchester United football club regularly cram 75,000 people into the stadium for football matches – that is more people than the population of some small towns and if you ever visit the place it can be daunting when you are sitting in the top tiers of the stadium looking down at the thousands of people all united and focussed on the football.

To be honest, I try not to think about the anonymity in a big city and I imagine that as I get older the temptation to move to a smaller cosier place by the sea will become far more appealing.

Thankfully I am still young and mobile enough to have fun in the sprawl that is Manchester and I hope it continues for many years to come.