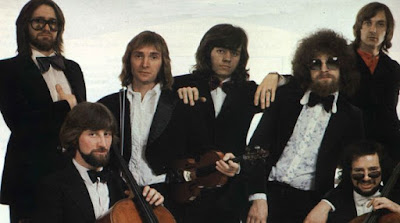 Edging out towards the pop end of the progressive spectrum are Electric Light Orchestra a band who combine rock and pop music with classical music and have been a favourite band of mine since the 1970’s.

Today’s song is the first part of a four part piece called “Concerto for a Rainy Day”, which culminates in the final part which is the excellent and most well-known Mr Blue Sky. This song is called Standin’ in the Rain.

Many people in the world picture England as a rainy, dull place with grey skies and miserable people. Elements of that are true, but only small elements. When the rain comes, the sky can become a miserable dark grey colour and the coldness of the raindrops isn’t pleasant. Walking home in the rain is quite depressing particularly if you have forgotten your umbrella.

The rest of this myth is totally false. I regard British people to be amongst the friendliest in the world and certainly the funniest. Maybe our inclement weather helps in this regard. We are willing and able to laugh at ourselves and smile in the face of adversity.

Manchester in particular has been done a disservice in the weather stakes. It rains a lot here but we are not the rainiest city in the United Kingdom by any stretch of the imagination. Furthermore, we are really friendly too. It has been observed that when a Mancunian travels to London, for example, he assumes that he can just turn to the person next to him on the London Underground and hold a conversation. In truth he can’t because, as a rule, Londoners are less friendly.

I have had some wacky conversations with random people in my adopted home city, just in passing. That’s one of the reasons I love the place, despite the higher than average rainfall.

One good thing about the rain is that the areas surrounding Manchester, the North West in particular, are always lush and green. When William Blake wrote the poem Jerusalem, I like to think he was thinking of the North West of England when he wrote the words “green and pleasant land”.

I’m sure he wasn’t because, in truth, the whole of the United Kingdom is as green as it is pleasant.

Anyway, back to the rain. I’ve mentioned this before but, despite the common belief that Manchester is the rainiest city in the United Kingdom, we aren’t. Here is the list:

One of my worst experiences of rain in the United Kingdom was in Glasgow. I was at Strathclyde University for a course in November some years ago and, in the evening, I decided to go for a walk to explore the city. I love walking and just meandered around the dark streets, taking in the sights. Sadly, I wandered a little too far from my hotel and was unsure of the direction back (this was in the days before satnavs).

And then it started to rain.

I was totally unprepared. I had a relatively thin coat on and had stupidly hoped that walking would help me work up a bit of a sweat. It did but then I realised that it had little protection for sudden rainstorms. Accompanying the rain was a biting northerly wind that tore through my flimsy protection and chilled me to the bone.

And then the thunder started.

I have never seen such rain in the United Kingdom. It was like ice and totally torrential. People in Glasgow must have been aware of what it was like being stuck in the cold November rain (perhaps this was the inspiration for the song by Guns ’n’ Roses) and were safely tucked up in their warm houses.

I was alone in the cold wet streets and ended up taking quite a few wrong turns as I searched the city streets for a sign I recognised. Sadly, my glasses were useless because the rain was so intense that I simply couldn’t see a thing.

After what seemed like an eternity, I stumbled on a taxi rank and hopped into the first cab. I was drenched – utterly drenched.

The hotel was just a three minute ride away and the driver’s almost unintelligible Glaswegian accent was no help whatsoever. I couldn’t understand a single word. One thing I did understand though was his mocking laughter as he dropped me off.

Back in my hotel room, I peeled off my cold wet clothes and discovered that the rain had penetrated everything. Only my socks were dry. Even my underpants were soaking wet.

I spent about an hour in a hot shower to warm up.

I have seen worse rain in Singapore, Trinidad and Hong Kong but at least in those countries it was warm.

If you take one thing from this post, it should be this:

Always carry an umbrella with you in Glasgow in the winter and make sure that you know the way back home – or at least the way to the nearest taxi rank.