Pulling Post-Punk With No Devotion 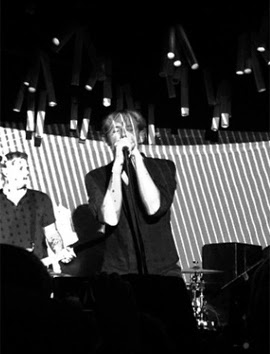 The new indie rock endeavor fronted by former Thursday and United Nations vocalist Geoff Rickly is off to a strong start. The band, No Devotion, picks up the remaining five members of the Lostprophets, which folded after the lead singer was convicted for horrid crimes against children.

The remaining members, unaware of the crimes, were left in a state of shock after the conviction. Heartbroken and angry, they immediately stopped performing as the Lostprophets and remained uncertain whether they would ever perform again.

"We didn't know if we would ever make music again," Stuart Richardson said. "If people would look us in the face. Everything felt like it was over."

After much consideration, Rickly agreed to front a new project with the former members. While he never listened to the Lostprophets before, he did find them to be fun and self-aware musicians who weren't looking to grow out of punk but rather grow with it.

"To my mind, post-punk is about taking a more sophisticated approach to that sound, and I think we all have a shared respect for that era of modern music," Rickly said. "I didn't think it was fair, what was happening to them. And, well, the music was too good to pass up."

Well ahead of an upcoming debut album due out next year, the band released its first single, Stay, along with the B-side Eyeshadow. The B-side was accompanied by a well-received music video, which capitalized on the band's understated new wave/post punk sound.

Eyeshadow is the stronger of the two tracks, which draws an analogy between a breakup and being in the shadow of someone's eyes. Stay is considerably more predictable, which laments the moment that someone knows that there is nothing they can do to make someone stay.

While both are fine, it is their more recent releases — 10,000 Summers — that earns this band a place on the radar. The track, 10,000 Summers, is an ethereal anthem that simultaneously evokes pathos and optimism while powering up Rickly as coming into his own as a vocalist. Supporting his vocals is the band's melodic-aggressive pulse and what will easily become a concert favorite because of its shout-out chorus.

The single includes the demo version on iTunes. The track is 30 seconds longer, with a different mix. Both the demo and studio cut provide an exquisite foreshadow of how Lee Gaze (guitar), Mike Lewis (guitar), Stuart Richardson (bass), Luke Johnson (drums) and Jamie Oliver (keys) intend to bring the moodier and enthusiastically anxious 1980s music back.

The track is backed by Only Thing, which plays to the front end of a relationship. While the song never reaches its lyrical or vocal potential, it does showcase its melodic and aggressive pulse.

Collectively, the four tracks go a long way in establishing a sense of anticipation for an EP and full-length debut album. As long as No Devotion manages to navigate away from producing too many typical teen lyrical themes, they have a shot at establishing something permanent within this niche.

While it could be easy enough to review the four tracks together, 10,000 Summers is the hero of this impromptu collection (despite the slight weakness on the B-side). The studio cut and the demo give the band an addictive edge. When added to Eyeshadow, No Devotion feels ready for success.