A PUPPY WITH EVERY TUXEDO? YES, PLEASE!

Quvenzhane Wallis is the new face of Armani Junior. What a coup for Giorgio, as her personality and talent are just amazing! And wait....does this photo indicate Armani has decided to include a puppy with every tuxedo? What a genius marketing technique to get kids to dress in formalwear...!!! 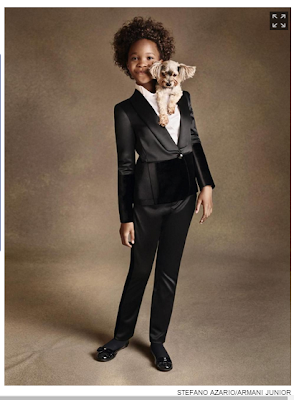 She's was the youngest nominee for an Academy Award for best actress, and now she's the new face of Armani Junior. Quvenzhané Wallis, who was nominated for an Oscar for her performance in "Beasts of the Southern Wild" has been chosen to represent Armani Junior for the fall/winter 2014-2015 campaign, wearing each outfit as a different character, shot portrait style by photographer Stefano Azario in front of a plain canvas backdrop. One of the first images of the campaign, which will go global next month, is of Wallis wearing a tuxedo and ballet flats, with an adorable puppy peeking out from the jacket. "Quvenzhané is so talented despite her young age," said Giorgio Armani in a release. "With her insatiable energy, Quvenzhané made the clothing come alive, interpreting it in her own singular way." Wallis, who was also part of the cast of the movie "12 Years a Slave," is going to play the lead role in the movie adaptation of the musical "Annie," with Jamie Foxx and Cameron Diaz, set to be released this fall. In a statement, Wallis said being chosen for the campaign was as exciting as being cast for a major film. "I was honored to wear his custom gown to the Oscars. It made me feel like a princess," Wallis said. "It's fun now to wear Armani Junior since I really like the clothing. It's young. It's cool. My friends are going to want to borrow all my clothes now, for sure." gpace@nydailynews.com (from the New York Daily News)