“What was working for you today?” someone asked Rays starter Brent Honeywell after his appearance in the Arizona Fall League’s Fall Stars Game. “Everything,” he said matter-of-factly, and it’s hard to argue. He struck out five in two scoreless frames and showcased his entire arsenal of impressive pitches. A few minutes later, he took me through those pitches, and discussed what’s working and what requires more attention in order for him to contribute in Tampa next season.

Let’s start with the least sexy pitch in his arsenal, the curve. It’s the newest piece, and it’s the one with which the righty has been tinkering this fall. He threw one on strike one to Anthony Alford to demonstrate what the pitch can mean to him — called strikes. “Nobody’s going to swing at a first-pitch breaking ball,” he said. “But I’m not going to throw it a whole bunch.”

At 75-76 without standout movement in any direction, the curve probably won’t be a plus offering in the big leagues, and so that first-pitch offering was the only one he threw in the Fall Stars game. He threw two cutters at 91, though, and one for a strike three that demonstrated good command:

Command of his harder stuff is the big question in the talent appraisal world. You see, Honeywell jerks his head when he throws home. Check it out. Look at the bill of his cap in this terrible picture from yours truly.

For a pitcher, demonstrating command is sometimes a question of learning about himself. Honeywell started out the Arizona Fall League season with a couple clunkers, but then turned it around, and may have learned something from those few games, other than “thinking through the game” more.

“I know where I can pitch and where I can repeat” he said about his early struggles. When I followed up with a question about throwing the high fastball, he replied: “I live up there all the time.” Maybe his big step forward with command was merely focusing on high 96 mph fastballs like this one:

“They talk about my screwball but what about my 96 mph fastball?” grinned Honeywell at one point, so he might be happy to see how far we buried the scroogie here. It’s fun, though, and it’s no trick pitch. He threw the thing for three strikeouts, including this one against Oakland’s Franklin Barreto.

Still… you might watch that video and think it’s a changeup. That’s fine, the pitch has this grip, which looks a bit like a circle change grip. But, there’s plenty of evidence that it’s different than most changeups. Take movement and velocity for example. There’s no pitch coming from a righty with a normal arm slot that moves anything like the screwball from Honeywell. 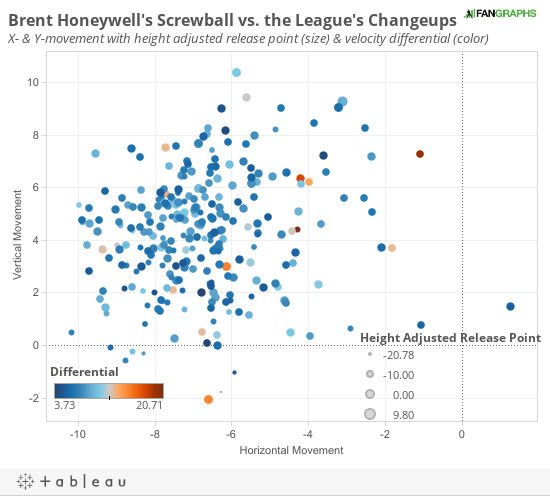 See that orange dot all the way down by the bottom? Now you’ve found the screwball. If features more downward movement than any other standard righty’s changeup, while still possessing good fade and a relatively massive velocity differential between the pitch and his fastball.

Mechanically, it’s a bit like a changeup squared. Watch Honeywell model the mechanics on the pitch, and see the fairly aggressive pronating (movement towards the thumb) that he does with his wrist.

When I related to him that Dallas Braden was the only other pitcher of the PITCHf/x era that threw a screwball that looked anything like his, that Braden pronated just as much or more, and that Braden’s doctor (Dr. James Andrews) was horrified by the shape of his shoulder… when I told him that, Honeywell just shrugged. “I don’t really yank it that hard, and I get out in front on any other pitch.”

Turns out, he treats the pitch like the reverse curveball we tried to invent this spring. You’ll notice how much like a curveball it is when you check out this screwball he used to strike out Alford, for example. Honeywell hopes not to tug on the pitch too much for good reason. Tug on the pitch too much to get more drop, and you get a “hump” up top like a curveball. “I don’t want them to see that hump,” he said, so he’s found his happy medium.

For now, he’s finishing up the Fall League working on things like that curveball, and making sure his fastball command is where he wants it to be. Because that screwball alone is not enough. “This does nothing if I can’t get ahead,” he admitted. As great as that thing is.