blogcatalog
Opened in March 2016 and located at 90 Thompson Street, between Prince & Spring streets, San Carlo Osteria Piemonte is the newest gastronomic addition to the Italian culinary scene in the heart of Soho, New York City. We have conducted an interview with the management of the restaurant. 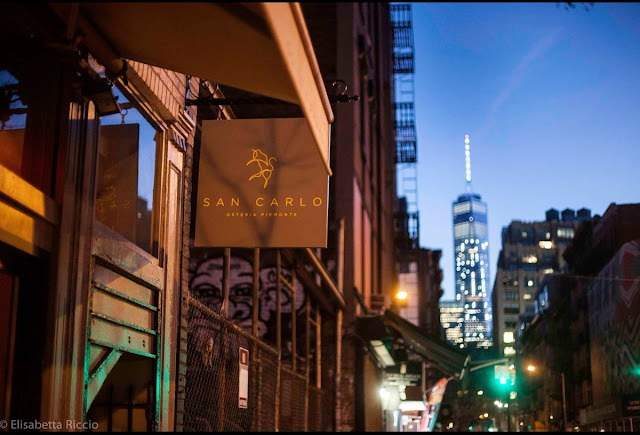 What kind of cuisine and ambiance does San Carlo Osteria Piemonte bring?
Moreno Cerutti, Managing Director: We named our restaurant San Carlo Osteria Piemonte because we wanted to give a strong emphasis to our territoriality, taking the most famous and monumental square of our Turin, Piazza San Carlo, as our icon.
We have brought to New York City the Piedmont’s culture that is reflected in a very simple cuisine and environment: straightforward but genuine and authentic dishes and soft music playing in the background. Also, the restaurant’s furnishings and architecture reveal our region, being extremely minimal but with high-end materials (bronze, faience, beams, contemporary wooden chairs, and tables).
What are the strengths of Chef Riccardo Zebro?
Riccardo Zebro, Executive Chef: I believe that my strengths are humility, international experience (Milan, Bermuda Island and New York), desire to do, and my family’s background and cooking traditions. I remember that since I was a child I used to watch my grandma cooking and, since then, I start “stealing” her secrets.
At San Carlo Osteria Piemonte I make some signature dishes that you can rarely find in New York such as BATTUTA DI FASSONE - beef tartar and quail egg, TAJARIN AL RAGU’ DI CONIGLIO – homemade angel hair pasta with rabbit ragu, dry black olives, and sage, BRASATO CON POLENTA TARAGNA – braised beef cheek, buckwheat and corn flour polenta with sautéed spinach, and CHOCOLATE TASTING – 4 giandujotti and 2 praline.
What are his principles about Northern Italian cuisine?
Riccardo Zebro, Executive Chef: The principles of Northern Italian cuisine are similar to the ones from other parts and regions of Italy. In the whole “Boot”, the main and common rule is that old recipes come from a predominantly peasant cooking and simple ingredients. What really differentiates Northern from Southern cuisine in Italy is that in the North the land is colder and the seasons are more severe (e.g. Po Valley) so the cuisine is richer meaning hearty food with lighter flavoring; while in the south they rather have lighter food with richer flavoring.
What are the ways and how do you share traditions and history of Piedmont with your customers?
Davide Poggi, General Manager: Our customers are very curious to know and appreciate our history and our origins. So we also act as spokesmen of our region, Piedmont, telling the elegance of the Savoy dynasty (1861-1946), it's historical and artistic excellences as well as its food and wine most famous and renown products.

Piedmont is known as one of Italy's oldest regions, and Turin, its largest city, was Italy's first capital in 1861. The region of Piedmont is the inspiration behind San Carlo's menu and wine program. Both a culinary and cultural destination, Piedmont is home to several UNESCO World Heritage sites, including Barolo and Barbaresco vineyards, as well as The University of Gastronomic Sciences, an international academic institution focusing on the organic relationship between food and cultures.

Why did you choose to locate in the SoHo neighborhood of New York City?
Davide Poggi, General Manager: Soho has always been a neighborhood that combines art, design, fashion, creativity, elegance and simplicity, modernity and antiquity… in short, a bit as we are! Plus, it is a melting pot of cultures.
We have seen several places but in the end, I think we found what most represent us and allow us to interact with residents, local businesses and tourists at the same time.
How challenging is it to be in the hospitality industry of NYC?
Riccardo Zebro, Executive Chef: New York City is definitely one of the world’s most dynamic environments: timing is tighter, the clientele is international, customers eat at any time including late at night. Here in New York the standards are higher and the challenge is daily.
What do you aim to achieve together with your team?
Moreno Cerutti, Managing Director: San Carlo was born from six friends’ passion for their homeland and their desire to share their culinary and cultural traditions with the world and we aim to be successful in New York and to create a replicable concept in other locations and other countries to export the Piedmont culture worldwide, since it has all the potential and has remained silent for too long, because of its people’s personality “proud and humble.
More info:
Website: https://www.sancarlonyc.com/
Facebook: https://www.facebook.com/sancarlonyc/
Instagram: https://www.instagram.com/sancarlonyc/
Twitter: https://twitter.com/sancarlonyc/
We use cookies to improve user experience, remember your preferences, and analyze website traffic. By continuing to browse this website, you consent to our use of cookies as outlined in our Privacy Policy.