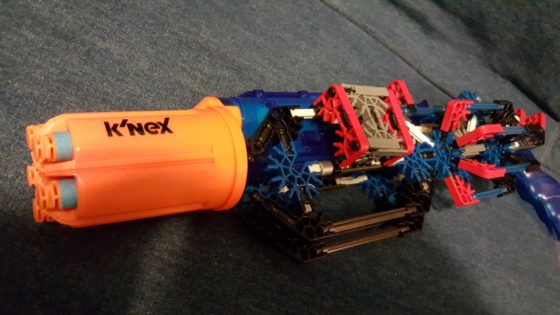 I review a K’NEX Build and Blast K-25X Rotoshot Blaster. Opinions are 100% my own.

I’ve had this toy for a while and had been waiting for a day where I could assemble it on my own without interruption from the kids. Eva could build it but Andrew isn’t old enough to do it yet. So without them around I could build quickly without one of the kids waiting to play with it. My build took a little over a half hour. I like the way that the K’NEX pieces fit together, they are nice and sturdy. I was unsure as to how this blaster would feel in my hands but it had a good feel. The pre-load ring was in a strange place in my opinions. I would have liked to have it all the way in the back for quicker loading and shooting. It felt a little awkward to load the darts.

Despite the pre-loading issue the blaster could shoot pretty far. the mechanism for shooting is self contained and you can pop that into many different configurations. There are 4 builds. I like the target because when you hit it it will swing back and forth. That way you know that you really hit it.

The more I play with the K’NEX pieces the more I enjoy them, there are some fun projects that you can do with them and when I have a moment to spend with Eva we will build something together. For now, check me out solo building the K-25X Rotoshot Blaster.

Here is the official description of the blaster.

Build a customizable blaster with rotating, 5-shot action! The new RotoChamber allows you to fire up to 5 darts without reloading. Each dart fires up to 75 feet. Set includes K’NEX rods and connectors plus special parts to create different blasters: 1 RotoChamber plus 1 quick fit grip and 1 pre-load ring in cool see-through blue! Build and rebuild by downloading instructions for 4 additional blasters and targets. Most models can be built one at a time. Compatible with the entire K-FORCE Build and Blast™ line. Ages 8+.