Rey A Drop Of Golden Sun [Review: The Force Awakens]

You may be aware of the recent release of this obscure micro-budget arthouse flick - in fact you may have noticed there are already one or two reviews elsewhere on the Internet. A few observations:

History does seem to repeat itself through the Star Wars movies. Certain themes and plot elements, particularly the obsession with genocidal planet-busting weapons, recur quite often. I'd like to think this is deliberate. After all, no-one complains if the recap at the end of a symphony movement sounds a bit like the first part of the movement, do they? It's called structure.

There seems to be a different approach to character-building. Finn, Rey and Kylo all have believable internal conflicts and grey areas, whereas the cast of all six previous films* are easily classifiable into "good" or "bad" (with the possible exception of Lando). It's particularly interesting to see "bad" characters that are so conflicted - in plot terms this might also indicate that the First Order is different from the monolithic Empire. However these characters are only complex for Star Wars - they still seem simplistic compared to many other films. 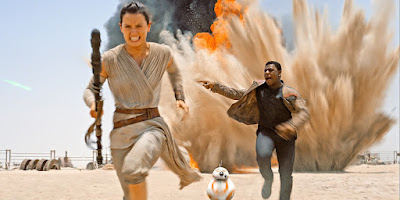 There's a definite improvement in the quality of the filmmaking. I won't say it was bad but there was always something eccentric about Lucas's approach to direction, perhaps befitting the most successful indie filmmaker of all time, whereas under J.J. Abrams and his team the new film looks - how do I say this? more professional. It's hard to pinpoint all the technical changes but there's better composition, more interesting shots and angles, and it all makes for a more engaging film.

Overall The Force Awakens worked for me - it was a lot of fun, I thought the new cast were excellent and brought something fresh to the series, and there were a lot of new ideas even if there were also a lot of familiar ones. I look forward to Episode VIII.

*The six previous films are, of course:
A New Hope
Empire Strikes Back
Revenge of the Sith
Return of the Jedi
Attack of the Clones
Ewoks: Caravan of Courage