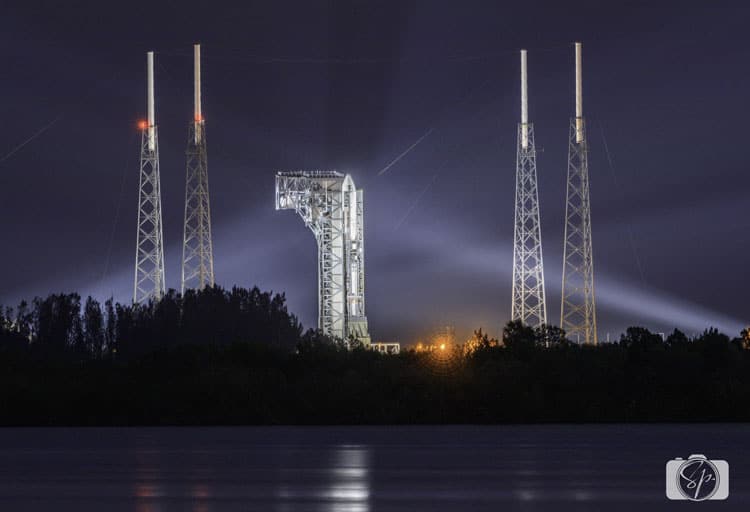 After visiting Kennedy Space Center for the first time two weeks prior, Mr. Misadventures and I found ourselves back at the complex to knock an item off our bucket list – a rocket launch!  Maybe we don’t qualify as space geeks. I’m not sure what the qualifications are. We love SciFi movies and TV shows, but you won’t find us at a Trek convention.  However, we do love NASA and we’re following the race for Mars, etc.  So we were super excited to hear that a rocket launch was occurring while we were visiting Florida.

First, let me tell you, attending a rocket launch is a commitment.  Time and Money. It is not cheap.  We purchased a package to view the launch at the LC-39 Gantry on Cape Canaveral.  It included transportation from inside of Kennedy Space Center (there and back), dinner and a T-shirt, plus the viewing itself.  That cost $49 per person, not bad at all for the experience… 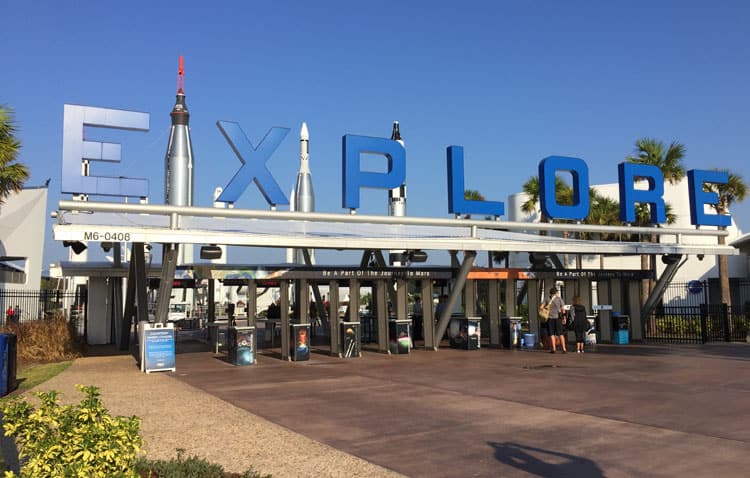 However, since transportation is from inside Kennedy Space Center, you have to (a) pay for parking – $10, and (b) pay for entry into the center – $50 per person. So the real cost for the viewing is $110 (per person).  To see a once in a lifetime event, it’s not so bad, but we had just been to Kennedy two weeks prior and had paid parking, entry fees and tour tickets at that time ($160), so all-in-all, it was expensive for us. 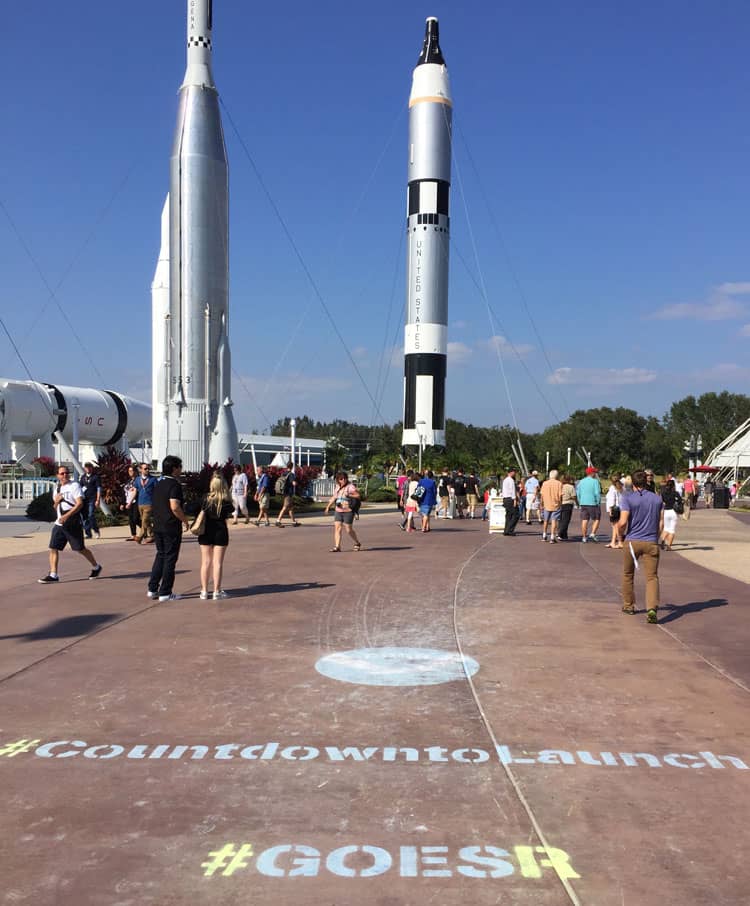 PLUS, it’s a huge time commitment. Because launch days can be a little nutty, we were instructed to be at the parking lot by 10:00 or risk not getting a parking space.  Well that freaked us out, so the parking lot opened at 8:30 a.m., and that’s when we arrived!  Kennedy Space Center opens at 9:00. We would not be picked up by the bus to take us to the launch viewing site until 3:00 p.m.  That’s a long time to spend in the park when you were just there two weeks earlier.

[If I ruled the Universe, I would have reserve parking for viewing ticket holders so that they could come later in the day.  I would have a separate entry directly to the buses, so you didn’t have to visit (and pay for) the park if you didn’t want to. But hey, I don’t rule the Universe…]

We caught a few sites we had missed on our first visit, plus visited the Shuttle Atlantis exhibit for a second time, because it is so cool! 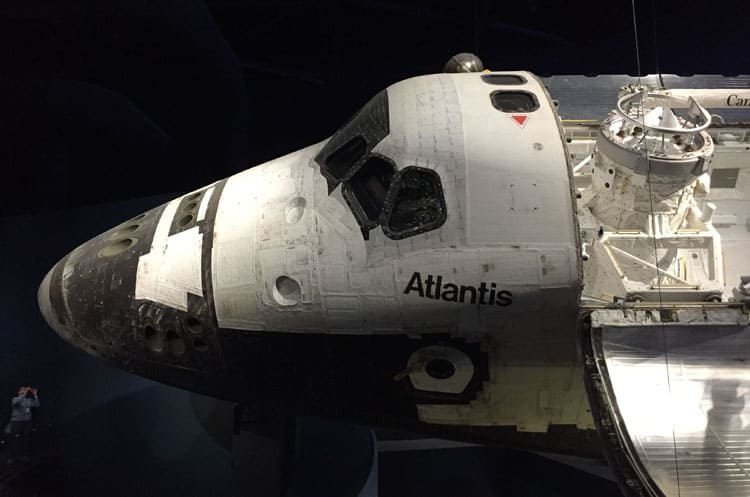 The ACTUAL Atlantis Space Shuttle. To put into perspective just how large it is, look at the person in the bottom left corner taking a photo!

Then we hung out and conversed with people in various shady spots.  As the late afternoon approached, we found a nice shady table near the rocket garden and enjoyed the company of a couple from the UK.  We discussed the our election, their Brexit, and a ton of travel. It made the time pass quickly! 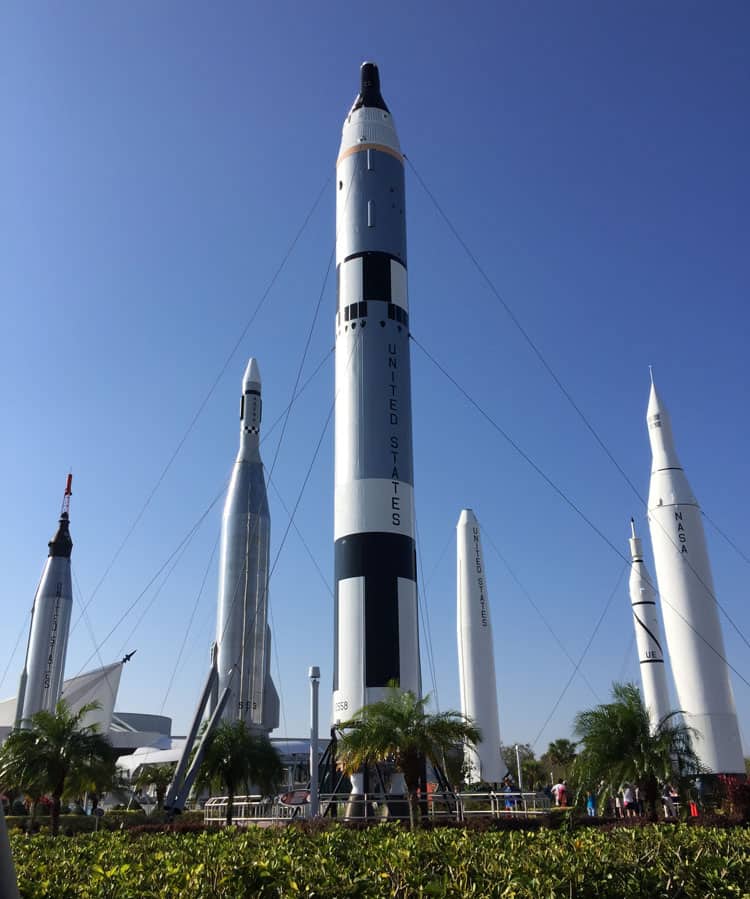 As we were enjoying our time with the British couple, people had begun to line up for the buses, in the full sun.  The wise couple had left their kids and grandkids standing in line while they sat with us in the shade.  So at 3:30 when they started loading buses, instead of having to drudge our way back to the line (even though we were part of the first ten people to begin waiting for the buses) the kind couple invited us to “join” their family!

In doing that, we were on the first bus and therefore first to the gantry so that Mr. Misadventures could get a prime spot.  It was his first attempt at this type of photography so he wanted to be in the best possible position.

But hey, bet you’re curious as to what we were actually going to see launch?!  When we arrived at the gantry and got set up, the afternoon sun was beginning to subside and this was the view. 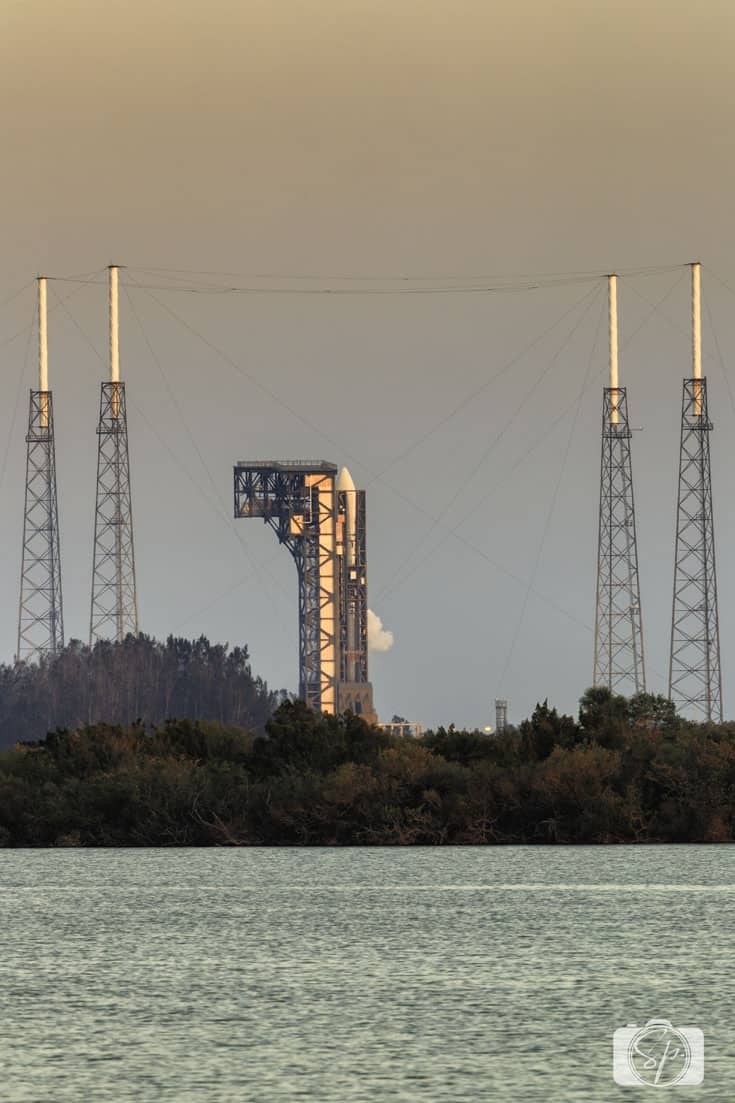 On the launch pad across the river at Cape Canaveral was an Atlas V Rocket (built by United Launch Alliance) which was going to launch a GOES-R satellite (a next-generation geostationary weather satellite) for NASA and NOAA. (If you are a space geek looking for more detail, check out this article.)

The launch window was from 5:42 to 6:42, meaning the rocket had to launch between those two times.  If the rocket didn’t launch it would be postponed until the next day at 4:42 p.m.

There was a commentator from NASA who was so helpful in explaining what was going on and translating some of the ongoing dialogue in the control center.  We also had a visit from astronaut, John McBride, a regular shuttle team member during the height of the space shuttle program, including the lead chase pilot for the maiden voyage of Space Shuttle Columbia. 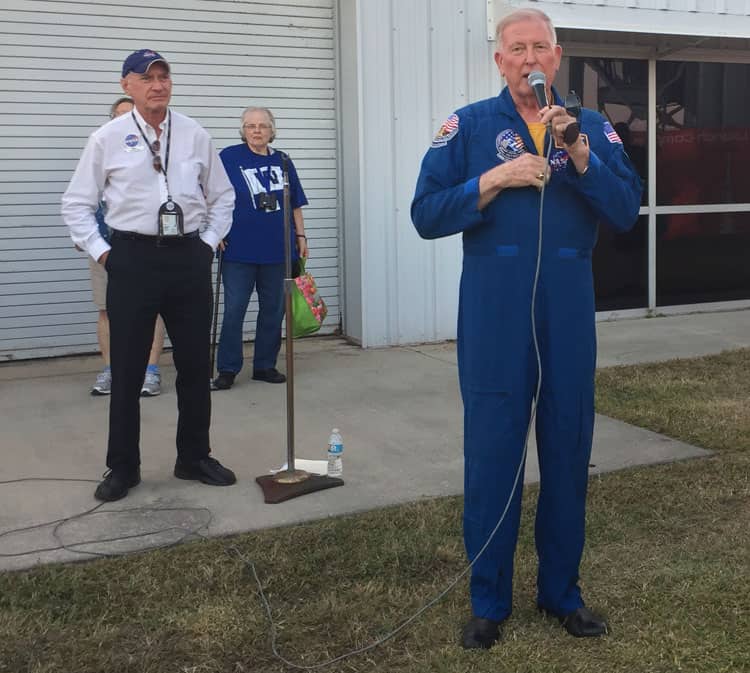 While we set up on the lawn, some chose seats in the stadium, while others sat in the gantry. I didn’t know what the heck a gantry was before going to the launch.  Turns out it’s a movable framework for supporting and servicing a rocket prior to launching and when not in use people can stand (or sit if they brought a chair) on it. 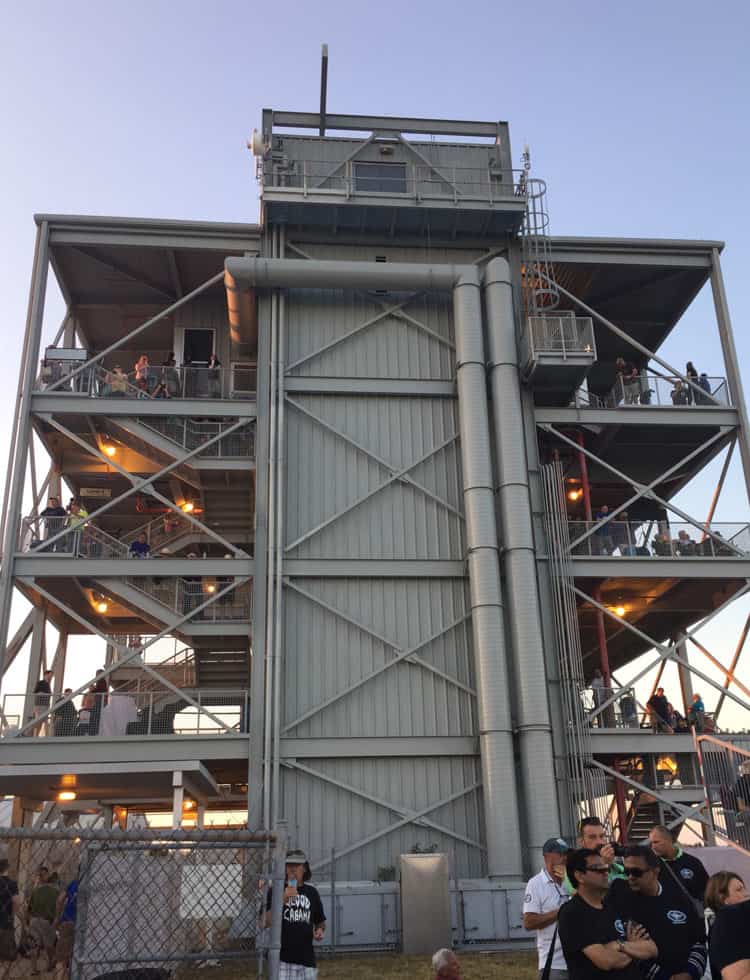 We were at the LC-39 (Launch Compex 39) gantry.  This is a truly historical place as ALL the Apollo and ALL the space shuttle missions were launched from the LC-39 pads (there are 3: A, B, and C). It’s also where the imposing and impressive VAB (Vehicle Assembly Building) is which we passed by on our way to and from the gantry.  We could just feel the space history in every step we took!

I took this shot of the VAB when we had visited two weeks earlier.  We took the Launch Control Center tour and got to see all the launch facilities up close.  There is an extra charge above and beyond the ticket price for Kennedy, but for a two-hour tour chock full of history and details, the $25 was WELL worth it. 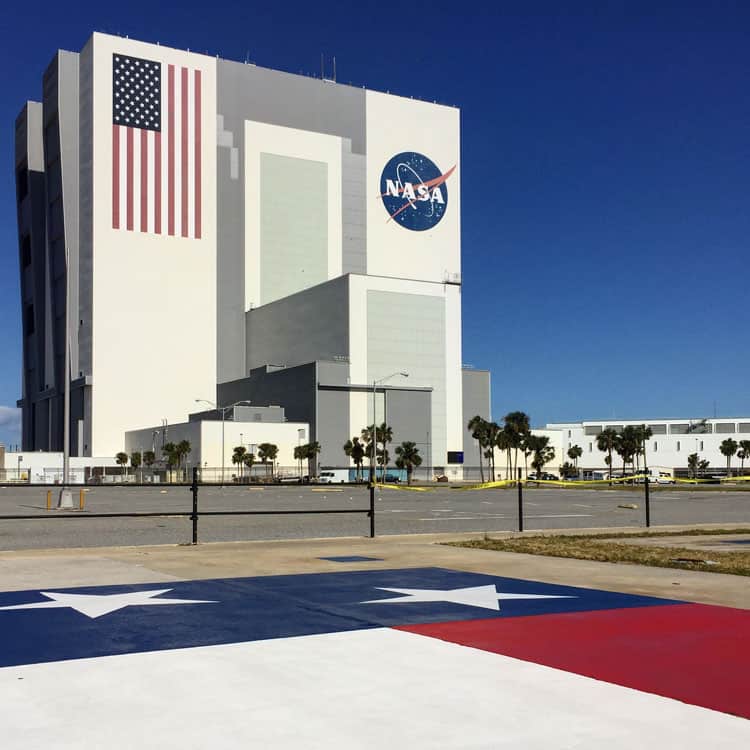 The VAB (Vehicle Assembly Building) at Kennedy Space Center – the tallest one story building in the world. Just the blue area of the American flag on the building is the size of a basketball court!

My view for a good hour consisted of this! Seated slightly behind and in between two photographers, one of them being Mr. Misadventures (who of course had to wear his Omega Moonwatch…space geek!). 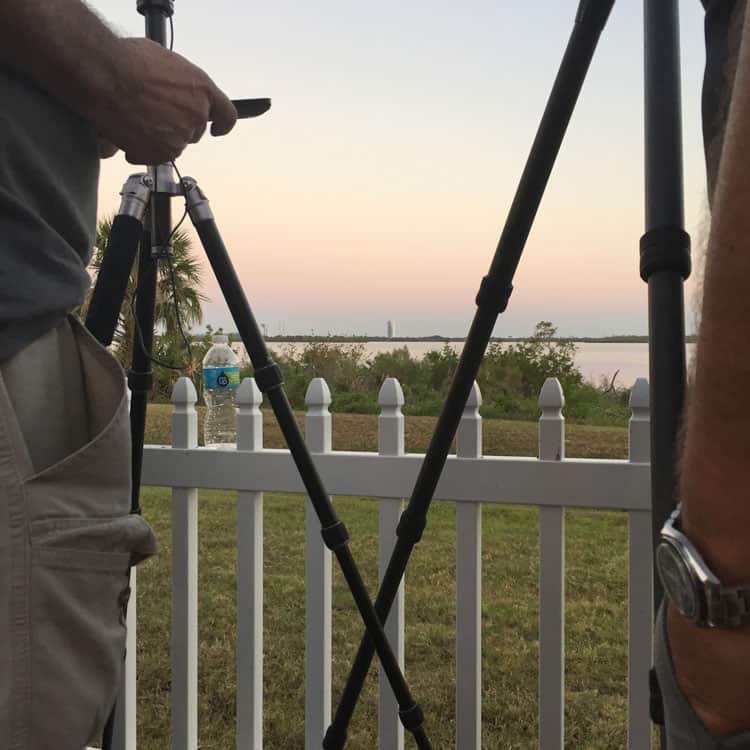 My pre-launch view of the Atlas V GOES-R Rocket.

I was quite comfortable in my comfy REI Flex Lite Chair. I had my usual Osprey backpack, my binoculars, water and a ton of Sahale Snacks to keep me fed (there was dinner offered – hot dogs and hamburgers – not my thing.) 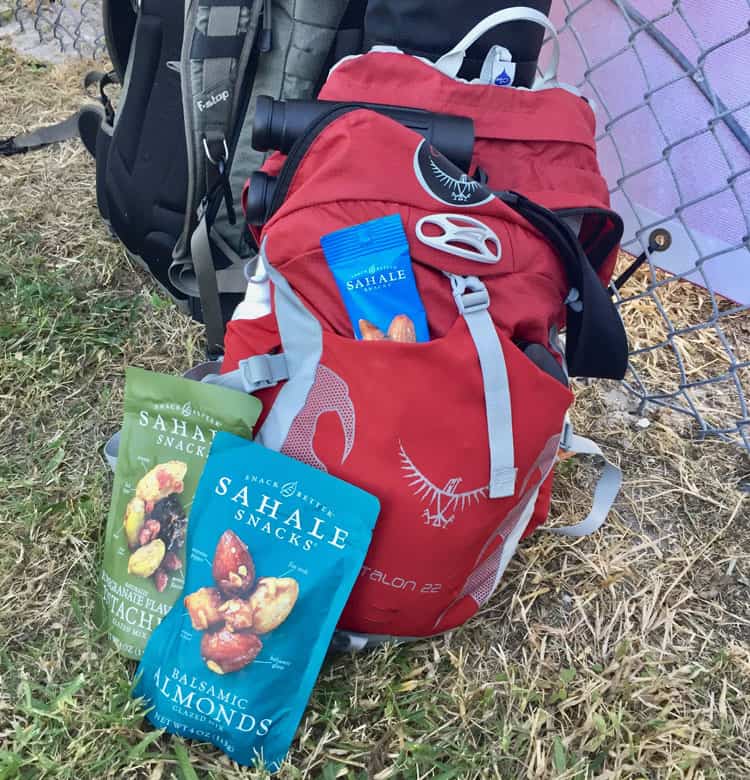 A familiar site, my backpack filled with Sahale Snacks.

We patiently waited for the launch window to open and the process to begin.  There was definite excitement in the air. I think whether you are a first timer or an old pro each launch is something special.  All the photographers kept checking their cameras and discussing their settings with each other.  Nobody wanted to miss the shot.

Then the launch process began.  As the launch director cycled through the various team checks for the first time, the “launch vehicle” team reported an issue.  The launch was put on hold (which our NASA commentator informed us was normal) while they troubleshooted the problem.  For thirty+ minutes new launch times, each one nine minutes in length, were set an put on hold while the team tried to determine what was the issue.  The crowd murmured and worried.

Then we heard back from the launch vehicle team.  It had been a false positive and all systems were set.

A new launch time (still within our initial launch window) was set.  Then a new hold was announced.

There was a problem with the “Eastern sky coordination.” That’s the Air Force. It’s their job to make sure the sky above the rocket launch area is clear and apparently there was an issue.  They had 15 minutes to get it straightened out before the launch window closed.

The audience was hushed.  From time to time you’d hear a nervous laugh or joke shared.  I told Mr. Misadventures that if the window closed we just paid $100 each for a t-shirt (as we would not be able to return the next day for the reschedule).

The final chance at the end of the launch window (6:42) was announced and I was worried, skeptical, a little bummed.

But the Air Force came through!  The final go/no-go checks were called out.

Launch Director is go and you have permission to launch…

There was a large flash. Then the vibration of the force of the rocket being lifted off.  Then a loud rumble.

At 6:42, as the day’s launch window closed, the rocket launched!

Mr. Misadventures had his camera set-up to take 14 images per second. When the rocket launched,  he had one chance and only a few seconds to get a photo.  I think he did a great job for his first time with this subject matter! 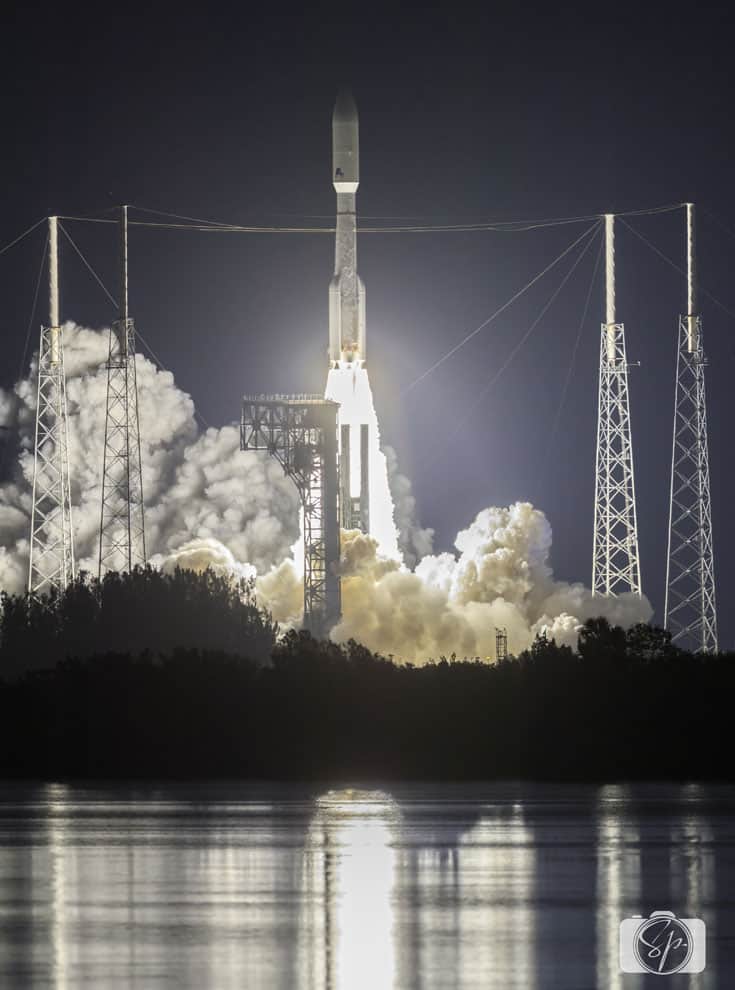 iPhones are great for many things, but not low-light or nighttime photography, so I didn’t even try. It was nice to just enjoy the moment and it was super exciting!

I know Mr. Misadventures was a little bummed out that by the time all the technical issues were resolved, it was dark, which made it far more difficult to take photos, but having the launch take place in the evening with the launchpad all lit up was far easier for those of us watching with naked eyes.  I took a look at several videos from both NASA and Kennedy and I don’t think they did any better, although it is interesting to watch at least once!

It truly was a once in a lifetime event! It is so amazing what man can do with technology!  And the GOES-R satellite is going to be able to provide essential information on climate such as weather pattern and severe storms (like hurricanes) as well as other critical environmental data.  I may have been a little grumpy about spending the entire day for a 60-second event, but when the event actually happened, all was forgotten!

How about you? Have you ever been to a rocket launch? Do you want to see one?