blogcatalog
There's a feeling I get when I look to the youtube,
And my spirit is crying for leaving.
In those videos I have seen strange things through the clips,
And the voices of those who comment weirdly.
Ooh, it makes me wonder,
Ooh, it really makes me wonder. 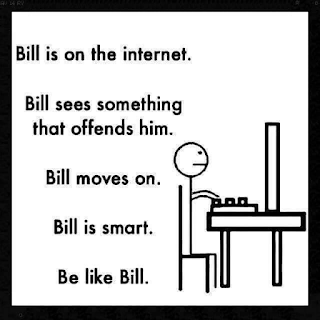 What is really making me wonder is the meme I stumbled on (stumbling on youtube doesn’t hurt my bones unlike my other stumbling) during a recent youtube excursion.

So what was the meme that caused this bustle in the hedgerow? Don’t be alarmed now. It’s really just an very odd thing in my opinion.

The video gamer subculture created a meme using the beginning of the Yes song, “Roundabout”. (for your listening pleasure which you might need after this reading displeasure, you'll find the song clip below)

Are you as confused as I am? Led Zeppelin’s Stairway To Heaven has do wah diddy to do with the Yes song. They might only be related in my mind’s playlist. Led Zeppelin just filled their song with great phrases so it often pops up in my thoughts. (Note last year I discontinued all my telepathic services so maybe this doesn’t confuse you at all)

Even though I know better, while I was listening to the “Roundabout” clip I browsed the comments (it is a very long song). If you find my blog posting odd, then you should read youtube comments sometime. They are a whole level worse than fakebook comments.

I noticed references to “GTA”, “JoJo”, and "To Be Continued” in many of those comment threads. Hmm, what odd things are these?

So with time on my hands and fingers on the keyboard I went searching. GTA is Grand Theft Auto which in my opinion is one of the worst games for impressionable teens (why they flocked to it?).

When the badass player steals a car in GTA the radio plays a radio station. Now there are tens of stations loaded in the GTA cars. The song “Roundabout” is played on one of those stations.

JoJo and To Be Continued are related to the same Japanese anime, JoJo’s Bizarre Adventure. Apparently in that series they play the intro to this song, freeze the scene and flash, “To Be Continued”. Fans took to their smartphones and started creating clips of some odd action about to happen. They added this intro music then shared their “creative” clips on the various video sharing services. It became a meme for others not me. I’ll admit I found a few were America’s-Funniest-Videos funny.

I find all this meme stuff very bizarre. All of this reminded me of another song, “Look What They’ve Done To My Song, Ma” but I’m not going off on that tangent today.