Rwanda, 20 Years On: Healing the Scars of Genocide 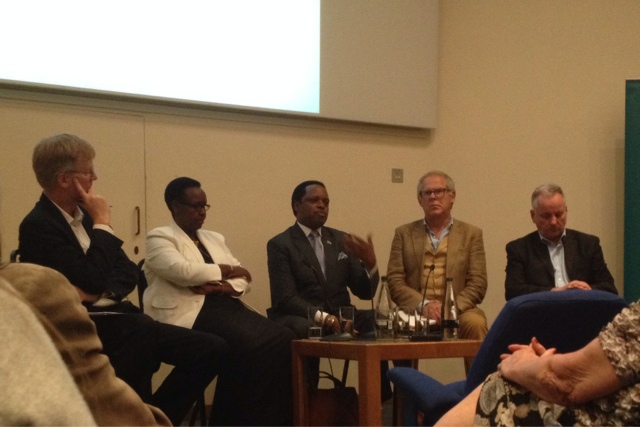 This year marks the 20th anniversary of the genocide in Rwanda and while it is ever important to remember the genocide in order to learn from it and prevent such an event from happening again, it is also important that we focus on how we move forward after such an event. Last night I attended Peace Talks, an event hosted by International Alert at The Geological Society in London. The topic for discussion was Rwanda, 20 Years On: Healing the Scars of Genocide.

The event was chaired by Dan Smith, Secretary General of International Alert. You might remember that he chaired the event War, Peace and Faith: The Ambiguous Role of Religion in 21st Century Conflict that I attended last year. Dan began by saying that while much has rightly been said about the genocide in Rwanda, the focus of the evening was on healing the scars of the genocide, to focus on what we can do to move forward.

The Way Things Appeared 20 Years Ago

Dan began asking His Excellency Williams Nkurunziza, High Commissioner of Rwanda to the UK, about what he saw 20 years ago as the road that lay ahead. He replied that by the end of the genocide, out of 8 million Rwandans, up to 1 million were dead, 3 million displaced and out of the country and the remaining 4 million were traumatised.

The emphasis of the Rwandan government had to be in reversing the forces that made genocide possible in the first place. The Rwandan constitution now stresses that Rwanda belongs to all Rwandese, and the focus is on reconciliation and belonging.

Nkurunziza notes that attitudes take time to change but that Rwandans have shown a readiness to learn from mistakes, a willingness to forgive and an ability to move on.

The same question was posed of Gloriosa Bazigaga, Rwanda Country Manager for International Alert. While Nkurunziza had touched on the Gacaca courts, Bazigaga continued saying that the courts were the start: they highlighted the events of the past but healing was slow to begin because people feared speaking out in fear of punishment.

Starting in 2007, International Alert began their work in healing psychological wounds and helping economic recovery through micro finance and the teaching of skills. Specifically, the organisation works with former prisoners and combatants, survivors and young people and they provide dialogue groups, trauma counselling and micro-finance to corporations of five people consisting of both survivors and perpetrators.

The Issues Involved in Recovery

Dan then asked Dr Ian Palmer, professor of military psychiatry to discuss the issues involved in healing from the scars of genocide. Dr Palmer began by saying that he believes psychiatry (that is the treatment of psychiatric conditions primarily through the use of medication) has only a small role to play and that the focus must be on healing individuals. Healing cannot begin until individuals feel safe, both from death and from the elements. Dr Palmer stressed social support in terms of safety, schooling, structure and food.

I found Dr Palmer's thoughts especially interesting given that I did my post-grad in Psychology.

Burundi and the DRC: The Political Context of Rwanda

Next up, the Rt Hon Lord Jack McConnell of Glenscorrodale PC spoke in his capacity as Chair of the All-Party Parliamentary Group on the African Great Lakes Region. He began by saying that it is remarkable that Rwanda has achieved what they did but there remain two different but continuing issues.

The first is that the exodus of Rwandans had an undeniable effect on the DRC and contributed to the inability of the DRC to move forward. The difficulty is that the government of the DRC relies too heavily on this explanation for their all of progress and they do move forward or take action.

The Road Ahead: New Avenues or More of the Same?

This is an interesting issue and the crux of this question was whether we continue in the current path of reconciliation, construction and coming together or whether our focus needs to be slightly different in the future.

HE Nkurunziza began by saying the Rwandan government are pleased with the progress made so far and are optimistic about the future. Reconciliation has been a deliberate decision and it is possible because the leadership is driving it. We must ensure that people do no succumb to the temptation to exact revenge, he said and without committed leadership, we cannot heal a fractured society.

When pressed, HE Nkurunziza went on to say that the process is driven by the politics of coexistence and systems and institutions to ensure that all Rwandese are views equally under the eyes of the law. Rwanda chose a path of restorative justice applied by the people themselves.

Specifically, programmes are underway to put all orphans into family homes rather than group homes; equal opportunities legislation provide equal access to jobs and education; there is universal primary education with 98% of primary school children in school; equal access to healthcare; and work to elevate people above the poverty line.

Gloriosa Bazigaga responded to the same question by stating that in the past, the focus has been on the legacy of genocide and reconciliation is still needed because people heal progressively but not at the same pace.

Bazigaga raised the issues of youth unemployment and land issues and Nkurunziza confirmed that the focus of the government is on the growth of the SME sector instead of a reliance on agriculture. According to the goals of the Rwandan government's Vision 2020 [PDF] policies, due to limited land capacity, the country aims to switch to a knowledge based economy by 2020.

Dan then asked Dr Ian Palmer, based on his experience of being in Rwanda and Bosnia, whether he could compare the two countries and comment on the timescale of healing (given that Bosnia is volatile again). Dr Palmer remarked that we take a lot for granted in the UK in terms of the structures needed for healing. He stated that if you don't have that structure, you can't do the rest and he commented again on the need for whole system change. He stated that mental illness is a combination of predisposition, a person's upbringing, trauma and the current environment. If you don't heal society, you're waiting for unscrupulous people who will pick on vulnerable people and start the whole process over again. Safety, structure, systems and the environment are most important.

Finally, Dan asked Jack McConnell to comment on a type of leadership that would be conducive to supporting Rwanda and other post-conflict societies. McConnell observed that we have a generation of political leaders with little history or passion and that there is a lack of strong leadership in the EU as a whole (with the possible exception of Germany). The difference between Bosnia and Rwanda, he said, was in the leadership but it is not really correct to draw comparisons between Rwanda and Bosnia (given what had previously been discussed on different paces and rates of change). It was perhaps most accurate to look at post-war Germany and the steps that were taken to suppress right-wing ideologies.

In closing, McConnell warned that we should not forget the facts and we should not let people minimise the genocides in Rwanda and Bosnia. We require education and witness participation so that change can be made but also to prevent it happening elsewhere. Dr Palmer closed by saying there is no perfect fix. We must be ever vigilant and aware of the risks and the cost of not getting it right. He stressed that we must not forget.

Gloriosa Bazigaga closed by saying that the work of International Alert in the communities should be a lesson for other institutions. The Catholic Church, for example, has not reflecting on the role of their priests in the genocide. Finally, HE Nkurunziza stated that we must get involved, that it is important to be an ambassador in the global campaign against genocide.

The debate was followed by a lively discussion on Apartheid and the possible application of the TRC model to Rwanda instead of the Gacaca courts and a comment on whether people should forgive and forget (as opposed to remembering what happened). The event was then following by drinks and canapés and an exhibition of the work of photojournalist Carole Allen Storey.