Science Fiction at its best: Karen A Wyle author of Twin-Bred

blogcatalog
I met Karen Wyle on line at my favorite women's writer's site:  She Writes.  Karen is a member of one of the groups I'm involved with there, and shared a little about her new science fiction novel, which was published in October of 2011. Despite the fact that I am a memoir and non-fiction writer,  I was intrigued by the subject matter and asked her if I could post a little about her and her book on my blog. The rest is history, so to speak.

Bio: Karen was born a Connecticut Yankee, but eventually settled in Bloomington, Indiana, home of Indiana University. She now considers herself a Hoosier. Wyle's childhood ambition was to be the youngest ever published novelist. While writing her first novel at age 10, she was mortified to learn that some British upstart had beaten her to the goal at age 9.
Wyle is an appellate attorney, photographer, political junkie, and mother of two daughters. Her voice is the product of almost five decades of reading both literary and genre fiction. It is no doubt also influenced, although she hopes not fatally tainted, by her years of law practice. Her personal history has led her to focus on often-intertwined themes of family, communication, the impossibility of controlling events, and the persistence of unfinished business.
Of course, after reading her bio, I was even more intrigued by her and wanted to know why she decided to write the book she did. With as little research, I found that according to Karen,
"The origin of Twin-Bred was an article I read about interactions between twins in utero -- synchronized movement, touching, even kissing. Either this article or a comment on the article mentioned the long term effect of losing a twin in utero. As an avid science fiction reader, I tend to see the sci-fi potential in any event or discovery. I imagined a scientist seeking to overcome the comprehension gap between two intelligent species by way of the bond between twins. It would be natural for the scientist who conceived this idea to be a twin; it would be intriguing if she were a twin survivor, and if she had somehow kept her lost twin alive as a companion, who could be a character in the story."
Synopsis of Twin-Bred 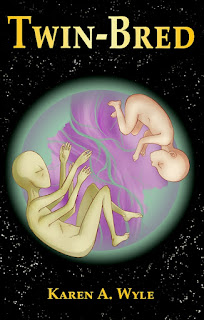 Can inter-species diplomacy begin in the womb? After seventy years on Tofarn, the human colonists and the native Tofa still know very little about each other.  Misunderstanding breed conflict, and the conflicts are escalating. Scientist Mara Cadell's radical proposal: that host mothers of either species carry fraternal twins, human and Tofa, in the hope that the bond between twins can bridge the gap between species. Mara lost her own twin, Levi, in utero, but she has secretly kept him alive in her mind as companion and collaborator.

Mara succeeds in obtaining governmental backing for her project - but both the human and Tofa establishments have their own agendas. Mara must shepherd the Twin-Bred through dangers she anticipated and others that even the canny Levi could not foresee. Will the Twin-Bred bring peace, war, or something else entirely?...
Karen's book can be purchased at Amazon (Paperback)  (Kindle). Or at  Barnes & Noble.
And you can find Carol at her website or on face Book