A friend of mine back in Sussex posted a photo to me on Facebook today, (this one had nothing to do with imaginary, terrible biopics) and I thought that I should share it with you.

The photo itself has no great aesthetic value, (no offence, Baz) it’s more the content that pleases me, because, well, the content is me.

And here it is, a clipping from today’s national Sun “newspaper”, which, without wishing to appear ungrateful, I wouldn’t wrap my chips in, let alone read (“read” being a relative term) but they get a pass for this specific square inch of print: 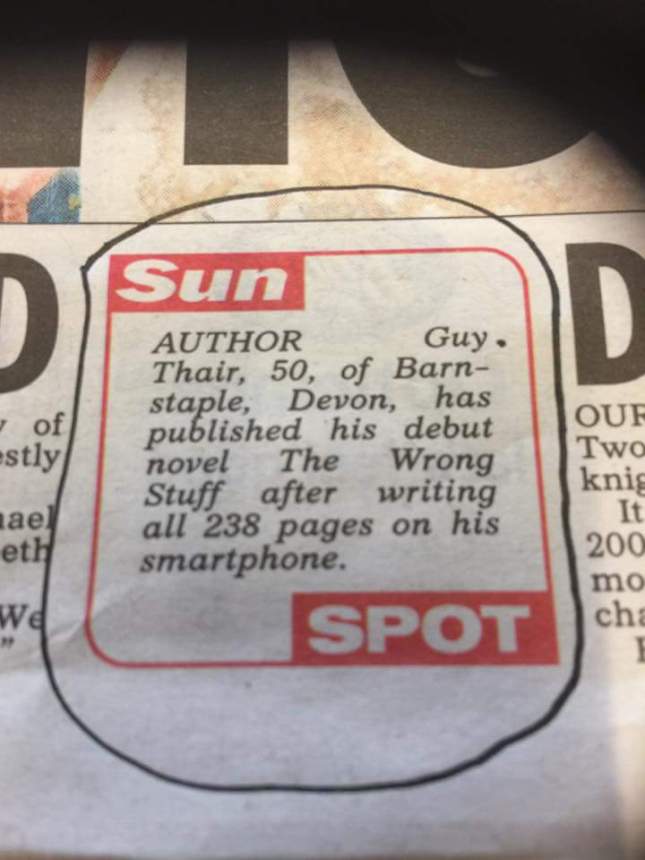 Where they acquired this journalistic scoop is a mystery, although I suspect it may have something to do with the interview I did for the local paper on Monday, although it doesn’t seem to be on the North Devon Gazette website yet, so it’s still a bit of a puzzle.

However, it does give me a perfect reason to remind you about my book (I wrote it on my phone, you know) which is available now on Kindle and in paperback.

It’s called The Wrong Stuff and it really is utterly brilliant and terribly exciting, so you should definitely buy it.

And one for a friend.

This is the Amazon.com link (for America and beyond).

Use this one for Amazon UK.

Here are some reviews, including one from the very marvellous Mr Richard Thorns, whose excellent novel, Gravenhead, can be found HERE and who readers of this blog may remember better as Zippy.

***** – “From start to finish it had me. It had drama and suspense, all tinged with a slice of black humour.”

Over to you, Zip;

I bought this book purely because of two things: firstly I was intrigued by Guy Thair’s method of writing, using one-word prompts from the followers of his blogging resumes; I thought this was a really fresh and inspirational way of putting a story together, one that did wonders for him, too, no doubt, by sharpening the imagination as the story went along. The second reason was that I really like Guy’s blogs and always find them thoughtful and meaningful, with new ways of looking at the world, and never dull or uninspiring (do check them out).

‘The Wrong Stuff’ begins as a sleepy antiques hunt, and you never think you are going to eavesdrop on plots of financial world-domination, a firefight in a very strange location or a romp through Victorian streets, but you are! And very enjoyable it is, too. I thought the book might run out of steam or be stuck for a realistic ending, but both fears went unrealised – actually the ending is very convincing, as is the treatment of time travel which has slipped up many an author in the past.

I only give 5 stars to the likes of Dickens, so there’s no shame in four! This is a very good read! Personally, I liked the Victoriana segment over the initial, modern-day scenario, but that’s just me. Even if you aren’t familiar with the blogs, I think you’ll like this; if you are, I know you will.”