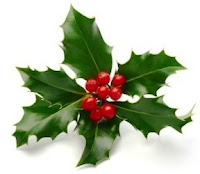 Wishing all my blog friends a Merry Christmas, Happy Holidays, and a Bright New Year!
For this holiday season, I’d like to share a special Christmas memories post I originally wrote in 2012 and updated in 2013. Although I haven’t blogged much this past year (due to circumstances), I will be blogging more in the coming year. I want to sincerely thank everyone who stops by my blog; I truly appreciate all the likes and comments over the years. All the best to everyone, always!

Remembering my Mom at Christmas
(updated from a previous post) 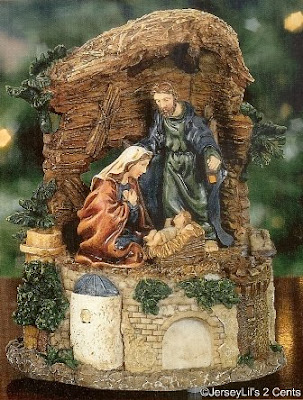 There's a musical nativity figurine I take out every December since 2002. It's a pretty ceramic piece that plays Away in a Manger and has beautifully painted figures of the Holy Family in the classic scene: Mary kneeling, hands folded in prayer, gazing adoringly at the Baby Jesus in the manger with Joseph standing watch over them, a staff in one hand and a lantern in the other. The bottom of this figurine has the date, December 2001, and my mother's name, Carmela. And that's the important part.

This particular figurine was not my first choice when I shopped for a musical nativity for my mother that Christmas. I had glanced at it quickly in the store then passed it by, moving on to other stores. My mom loved nativity scenes and musical boxes, and I was looking for one that revolved while playing a tune (this one is stationary), and one that was larger (this one is a bit over 6 inches tall), so my mother could more clearly see the details given her failing eyesight. After shopping for hours and not finding what I wanted, I went back to the first store and chose this one because it was pretty and colorful, and it played one of my mother's favorite Christmas tunes,

Away in a Manger. I wasn't totally satisfied with it...the melody sounded rather tinny and the music didn't play very long before needing rewinding...but with time running short, I bought it with the idea that it was fine for now and I'd get her a better one the next Christmas.

Although I was raised Catholic with eight years of parochial school (three different grammar schools due to my family moving and my eighth-grade year at a Catholic orphanage due to Mom's illness), I am not particularly religious (although I consider myself to be spiritual), and a nativity was not a gift that initially came to mind for me. I had already purchased several Christmas gifts for my mother that year and thought I was done shopping. On Christmas Eve, however, I felt drawn to finding a musical nativity for her. Perhaps I was inspired by hearing Christmas music played in the stores while shopping, and remembering how my mother loved nativity scenes and music.

Before wrapping the gift, I wrote the date and my mother's name on the bottom with a magic marker because she was staying in a nursing home. When I arrived to visit, she looked at me with the faraway blank stare that had become her daily expression. She said my name, as she always did, and nothing more. Sometimes you could not engage her at all, as if she just wasn't there. When I handed her the gifts, she reacted slightly, just giving a little head nod in acknowledgement. But when she saw the nativity, she smiled! For her to really smile at something was a big deal; she did not smile often anymore.

With her failing eyesight, I wasn't even sure the figurine was big enough for her to see the wonderful detail in the figures. But no matter, she seemed to see it well enough to smile right away when it was unwrapped, and an even bigger smile that lit up her face when she heard, Away in a Manger.

My mother loved music; she loved to sing. In her younger days before the illness that left her body alone but took her mind...and oh, did it take her mind to places where a dark unreality could turn a warm summer day into a harsh winter night...she sang whenever she could. When my siblings and I were children, my mother sang along to the radio every day. She had a lovely singing voice. Then gradually, the illness took my mother's body, as well as her mind.

"Away in a manger, No crib for his bed,
The little Lord Jesus, Lay down his sweet head."﻿﻿﻿﻿﻿﻿﻿﻿
Mom lay down her head for her eternal rest just a few months later. I didn't know it at the time but December 2001 would be my mother's last Christmas. Much sooner then I was expecting. Was it a Christmas miracle that she smiled for me that day? Certainly, a Christmas miracle is anything you want it to be. And so it is for me. Every Christmas since then, when I play the musical nativity, I smile and think of my mother on that Christmas Day. The music I once thought sounded rather tinny, doesn't sound tinny anymore. Now it just sounds like a wonderful Christmas memory.