blogcatalog
Here's a blog post from November that I forgot to post. Here's a little warning for ya - this is is the second book in the trilogy. 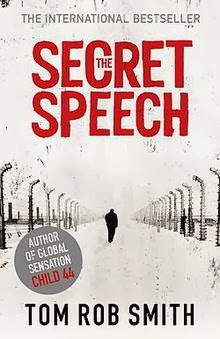 Hi! I've just returned from India where I thought I'd have the opportunity to read quite a few novels. However I didn't realise that most of my time was going to be spent chatting. I stayed in a yoga and surf retreat you see. It was basically a hippy commune. Every time I sat down with my book there was suddenly something that needed to be discussed - the surf that morning, how much my arms hurt, romances - current and past, who fancied who, the haggling we'd done at the market, whether someone should have told us that he was on anti-depressants or not and so on. However I did manage to finish reading The Secret Speech by Tom Rob Smith.

The title The Secret Speech refers to Soviet leader Nikita Khrushchev's 1956 address admitting Stalin's crimes. The book looks at the consequences fro the people who served Stalin. Like the first book in the trilogy, Child 44, we again follow the story of special agent Leo Demidov. As one of Stalin's former secret police officers he is one of these people who has committed crimes in Stalin's name. The book reminds us of his past with a flash back to his denunciation of a priest who has taken him under his wing. Leo may be the hero of the novel, currently heading up a real crime unit, but there is no doubt that he has been 'the bad guy' in the past, whether he thought he was acting for good or not.

The story then moves forward to the present where Leo is asked to investigate the revenge killings of old Secret service agents. They are being carried out by a group headed by someone from Leo's past. After the abduction of his daughter Zoya by the terrorist group Leo is forced to make up for his past crimes. By rescuing the priest he once condemned.

This second novel is not as good as child 44 but it's still a highly entertaining read with never a dull moment. I give it a 6/10.