Though self-publishing models are rapidly evolving and opportunities expanding, the bottom line is that most self-published books just don't sell a whole lot of copies. Some of the reasons for that include:

One big thing has changed, though: the risk. Back in 2008, print on demand options (POD) were newer and more limited. The cost per book was higher and depending on the company you used, you might have a minimum order. That meant, in most cases, shelling out cash to get started.

Depending on the service you use, that may still be required. But there are other options, options that don't require you to invest a dime up front. When it comes to print books, even those options have drawbacks: your cost per book will still require pricing that's outside the typical range of a large publisher. For example, if I were to publish a 200 page romance novel through CreateSpace, Amazon's self-publishing POD division, I'd have to price the book at about $5.50 just to break even on Amazon.com. $5.50 is in range for a book like that, but if you want to actually turn a profit, you'll have to mark it up even further--and that's only for sales on Amazon.com. In the expanded distribution network that makes your book more widely available, the break-even price is about $8.15--far too high for a book of that length and type to be competitive, even without building in a profit.

So why have I changed my mind about self-publishing fiction? It boils down to Kindle Direct Publishing, the Amazon option that allows you to upload a book directly to the Kindle store. That's it. If you're just publishing the e-book for Kindle, you don't even need an ISBN. No up front costs, a little bit of formatting, a quick upload, and your book is available in the Kindle store.

Of course, no one will see it, let alone buy it. But it's there, quickly and for free.

And then the games begin. 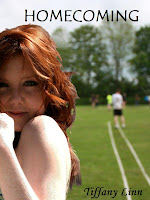 I uploaded my romance novel, Homecoming, to the Kindle store on January 9. The day I uploaded the novel, I posted about it on Facebook (where I have a relatively small number of friends--I don't use Facebook for marketing), but didn't do any other promotion. A handful of people, undoubtedly all friends and relatives, bought the book over the next few days. And then nothing.

From what I've read, it seems that's the end of the cycle for many self-published novels. More for the sake of experiment than to revive this book, I agreed to the 90-day Kindle exclusive and offered the book free for 24 hours.

"So what?" you might be saying. "You didn't make any money on those books." That's true. But that was okay with me, for a couple of reasons. One was that I have another romance novel almost done, and I figured that giving one away for free would be a good way to build an audience for that one...and the next, and the next. The other was that I suspected--though I was only guessing--that making the book available for free would make it more visible even after the free download period ended. That turned out to be true: the book started appearing in "people who purchased this book also purchased" and such, and strangers started to buy it.

It was only a handful of strangers; it was still nothing to set the world on fire. But an interesting cycle started. Because sales of most books in the Kindle store are so low, it only took a handful of books each day to boost my sales ranking. Oh, I didn't make it into the top 100 or anything; the highest ranking I've reached thus far was about 16,000. But that's apparently high enough to once again increase visibility. And that increased visibility draws a couple of additional sales, which in turn bump my sales ranking.

Right now, with no more effort than I've just described, I'm making about $12/day on the book. I'm not quitting my day job yet. But the sale numbers are increasing slightly every day, and even at $12/day this book is on track to pull in a few hundred dollars a month. That's certainly enough to have made it worthwhile to invest the five hours or so it took me to get the book formatted, uploaded, my account created, and formulate my strategy. And that's before factoring in the impact on sales of the next book, which will be available mid-February.

More to come as I see whether the numbers taper off or continue to grow, and how adding books to the mix changes things.