Sleater-Kinney Finds No Cities To Love 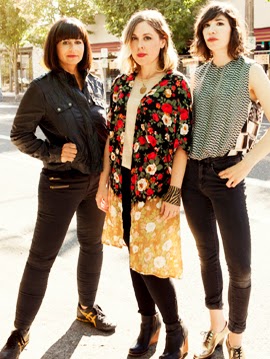 Just when everyone was growing used to the idea that Sleater-Kinney was on a permanent hiatus, leaving room for Corin Tucker;s eponymously-titled band to release 1,000 Years, the peerless and cohesiveness of Janet Weiss (drums), Carrie Brownstein (vocals/guitar), and Tucker (vocals/guitar) are back. No Cities To Love is the long-awaited triumphant return of S-K.

The whole of it includes 32 minutes of punk-tinged rock with sneers, jeers, and masterful songwriting with dramatic shifts, hairpin changeups, and a harmonic cohesiveness that defies conventional composition with its oft staccato delivery. No Cities To Love is one of those rare albums that allows listeners to discover new depths with each pass, opening the complex brevity of each track like a rare and exotic blossom.

No Cities To Love is a triumph return for a timeless favorite.

Conjuring the image of a flower, however, is not meant to suggest that No Cities To Love is delicate. It's anything but. The first outing in a decade from this acclaimed trio sets new sights for the punk’s political insight and emotional impact. The 90s riot grrrl scene that was sparked out of the Pacific Northwest suddenly sounds relevant not because this is a revival but because it is a reinvention.

"We sound possessed on these songs," says guitarist/vocalist Brownstein about the band's eighth studio album. "Willing it all — the entire weight of the band and what it means to us — back into existence."

The separation of Brownstein and Tucker has clearly brought the two artists closer together, writing songs that are more self-aware than the band's once disruptive nature. Instead the band brings together something significantly more modern, crisp, and clear.

Take a track like A New Wave that the band played on Letterman. It very clearly is a track that tugs on where the band sees itself artistically today. One of the lines even jumps out, declaring that they are "inventing their own kind of obscurity." The lyrics are very telling in that S-K no longer wails against not understanding where society is but rather they understand it all too well and realize it is sometimes better to rise above it (or be amused by it) because it's almost impossible to change it.

In some sense that is the theme of the title track, No Love For Cities, too. The song itself tackles how people identify with cities even if cities are mostly the same. Sometimes the weather or the landmarks or the people might be a bit different. But aside from those elements, they're not different at all.

Price Tag is very much like that too. It indicts the 9-to-5 drudgery of civilization, but doesn't call for any change or disruption like they might have done in the past. Instead, they serve it up as how it is.

Following Price Tag, S-K becomes a little more complacent in its production of Fangless. While not nearly as sharp as the songwriting throughout the rest of the album, the lyrical work demonstrates a certain sophistication they strive for, alluding to the rise and fall of fatherly failure.

No Anthems attempts to ward away the mediocrity of fame, with the band recognizing that they were once trying to be something monolithic but nowadays they mostly want to avoid it. They might not be able to, but even that accomplishes their objective to cover topics without any apparent exit.

"The three of us want the same thing," says Weiss. "We want the songs to be daunting."

No Cities To Love By Sleater-Kinney Strikes Hot At 7.2 On The Liquid Hip Richter Scale.

No Cities To Love will not disappoint anyone as there are ample standout tracks, including the dueling vocals of Bury Our Friends, brilliantly upbeat but aggressive chorus of Hey Darling, and down tempo closer Fade. The latter might lack the finesse of the rest of the album, but it succeeds in bringing in some experimentation on an album that feels more back to basics than inventive.

You can find No Cities To Love (Deluxe Edition) (Limited Edition, 2-LP, White Vinyl, Includes Download Card) on Amazon or download it from iTunes. You can also find No Cities To Love and the entire library of Sleater-Kinney on independent reseller F.Y.E. For upcoming shows and tour information, visit them on Facebook.