Slumming It at Hashtain Park 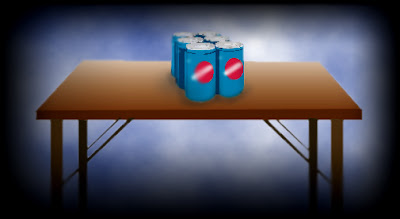 One warm Stratum XIII evening the Technicots [sic] had scored tickets for a table (!) at the renowned Hashtain Park amphitheatre, courtesy of one of their millionaire fathers. They were excited to be at a concert featuring the Master Songster. Most tables were occupied by gentried season ticket-holders, replete with fancy linens, the occasional candelabrum, fusion finger food, and flavoured wine coolers. A “Yuppie Picnic,” if you will.
The Technicots, in high contrast, sat at an unadorned folding table (the natural state of all unoccupied tables). Atop the table sat a six-pack of cheap brew that was supposed to last the endurance of the concert for the handful of fellows. (The venue had a BYO policy.)
The concert began and the Master Songster was cranking out his hits one after another, including “Stuck Inside a Mobile Home with a Memphis High School Band.”
But the Technicots noticed a disturbing fact — not once did the Master Songster look up from his guitar to make eye contact with the audience. One Technicot swiveled his head, taking in the crowd. Aside from a few die-hard fans down front, all of the tables were engaged in idle chatter whilst nibbling on balsamic munchables. That a world-class musician there upon the stage was being treated as “background music” was certainly dismaying. Philistines, the lot of them.
But the Technicots enjoyed the concert nonetheless.
At the close of the show, as people were packing up, a prim and coiffed woman at the next table leaned over to the Technicots and sniffed, “Do you want the rest of our paté? We were going to give it to the dog.”