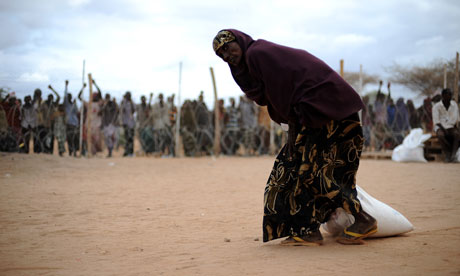 A Somali refugee drags a sack with food aid given to her at a food distribution point at the Dadaab refugee camp this week. Photograph: Roberto Schmidt/AFP/Getty
Somalia's deputy prime minister tells FAO meeting that people in areas controlled by Al-Shabaab may starve to death if aid does not reach them in the next few weeks

The vast majority of people in insurgent-controlled areas of Somalia may starve to death unless aid reaches them in the next few weeks, said Mohamed Ibrahim, Somalia's deputy prime minister.

Ibrahim's blunt warning came at an emergency summit in Rome organised by France, the current president of the G20, and the Foodand Agriculture Organisation (FAO) as the world community seeks to mobilise help to relieve Somalia's first famine in 18 years.

Somalia's deputy prime minister said the fundamental cause of the famine was the fragility of the state and enduring conflict that has hindered the provision of basic services. He also blamed insurgents who have blocked lifesaving aid.

"The plight of the Somali people is desperate," said Ibrahim. "We have witnessed suffering in the heart of the capital."

Access to affected regions has emerged as a key problem in the current crisis. Last week, the UN declared a famine in two regions of Somalia southern Bakool and Lower Shabelle. Somali Islamist rebels, who control these areas, last week denied lifting a ban on certain aid groups indrought-affected areas and rejected the UN's claim that there is a famine in the region.

Earlier this month, the rebel group al-Shabaab, which controls much of southern Somalia, had said earlier this month that it would allow all humanitarian groups access to assist with the drought response. But al-Shabaab spokesman Sheikh Ali Mohamud Rage told a local radio station on Friday that the ban on specific aid agencies, which was imposed in 2009 and 2010, still stands.

At the time, the rebels accused various humanitarian groups, including the UN's World Food Programme (WFP), which is expected to lead the current drought response, of damaging the local economy, being anti-Muslim, and of spying for the government.

An estimated 11.6 million people need humanitarian assistance in Somalia, Ethiopia, Kenya and Djibouti, according to the UN.

As G20 leaders met in Rome, Save the Children warned that the number of malnourished children in 14 of its feeding centres in camps in Puntland, northern Somalia, has doubled from 3,500 to 6,000 in just two weeks.

The number of acutely malnourished children – and those who will die without emergency assistance – has also doubled, rising from 300 children to 600 in the last two weeks at the charity's clinics in Puntland.

Médecins Sans Frontières (MSF) said its feeding centres were operating beyond their original capacity and, compared to last year, they were receiving up to seven times more patients in certain locations each week. MSF said "spontaneous camps" are emerging in various locations, such as in the Lower Juba Valley.

Save the Children said if world leaders at the emergency meeting fail to plug a $1bn (£613m) funding gap for the east Africa aid effort, more than a million children could die in Somalia alone.

Save the Children pointed out that, despite organising the meeting, the French government has donated just £1.6m to the aid effort, lagging far behind the UK government's recent £52m donation. Italy – the host of today's summit and Europe's fourth largest economy – has contributed only £550,000. Norway told the FAO meeting that it was ready to contribute more money to the relief effort, while the EU has increased its funding to euros 100m. It hopes to increase this further to euros 160m.

In a pointed intervention, Jeffrey Sachs, special adviser to the UN on the millennium development goals, said the world needed to turn to the Gulf states if it was serious about raising money quickly.

"We have to look to the Gulf states," he said. "It is the only place where the money really is. This is a room of governments without money."

In a later press conference, Kanayo Nwanze, the head of the International Fund for Agricultural Development, a UN special agency, chastised the lack of political leadership in Africa in supporting agriculture.

"If Africa does not get its house in order and expects the world to help us out, we are dreaming," said Nwanze. "Thank goodness Tanzania, Kenya and Ghana are moving ahead with agriculture."

He criticised African governments for not keeping their 2003 promise to earmark 10% of their budgets for agriculture.

"Less than 10 countries have fulfilled that pledge," he said.

The World Bank promised to provide more than $500m to help drought victims. The money would be spent on projects in Ethiopia, Kenya, Djibouti and Somalia, including the worst-stricken areas in that country "where circumstances permit", the bank said.

"The recurring nature of drought and growing risk it poses to social and economic gains in this region calls not only for immediate relief from the current situation, but also for building longterm drought resilience," said Obiageli Ezekwesili, World Bank vice-president for Africa.

Opening the meeting, the FAO's director general, Jacques Diouf, said there was a need for greater co-ordination in response to the drought and famine in east Africa to "save our brothers and sisters of dying of thirst and hunger".

He said the world was faced with a similar crisis in the region in 2000, which prompted the then secretary general of the UN, Kofi Annan, to appoint an inter-agency taskforce to investigate what could be done to make the region more food secure.

The report said large-scale infrastructure was needed alongside investment in small-scale projects, particularly in rural roads, livestock markets and basic services, "ensuring that these developments are community-driven".

Diouf drew parallels with the recommendations made in the report by the taskforce, which he led, and the situation now. He pointed out that irrigation was an important component in addressing the crisis. Just 1% of land in the effected region was irrigated in 2000, he said.

Little appears to have been done to increase this figure. An estimated 2% of land in eastern and southern Africa is believed to now have an irrigation system in place; only about 7% of land in the whole of Africa is irrigated, compared with more than 30% of land in Asia.

Diouf said the 2000 crisis was averted and international attention drifted to other issues. "Must history always repeat itself?" he asked. "And in the first few years of the 21st century, must the international community go through the agonising spectacle of seeing children and livestock dying, as in ancient Egyptian times?

"My hope is that the international community and the G20 in the next few years will marshal enormous resources so in the future such tragic events are nothing more than a bad memory ... that fields will be irrigated and roads will be built so the region will no longer weigh on our collective conscience."

The executive director of the World Food Programme, Josette Sheeran, said the current crisis stemmed from a "triple storm" of drought, soaring food prices and conflict.