DENVER — In response to a call for help feeding Denver's poor and homeless population during the holidays and beyond, Southwest Airlines today announced a $50,000 donation to the Denver Rescue Mission, a non-profit organization dedicated to providing food, shelter, clothing, and rehabilitation services to the estimated 11,000 homeless people in Denver. 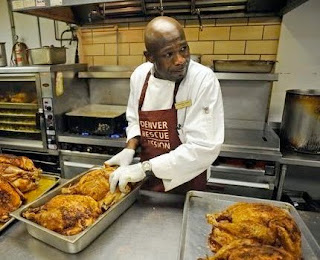 The donation is the largest turkey donation in the Denver Rescue Mission's history, and the food will be distributed to families at this year's Thanksgiving Banquet-in-a-Box and be served at this year's Great Thanksgiving Banquet. Additional turkeys will be distributed to families in need through churches and other non-profits across the Denver Metro area.

"Southwest Airlines is committed to Denver, and our commitment includes helping the less fortunate. In these challenging economic times, we're grateful for the opportunity to step forward to support the Denver Rescue Mission," said Dave LaPorte, Southwest's Station Manager in Denver. "By supporting something so close to the hearts and minds of our Denver Customers and local Employees, we're making an investment to help strengthen our community."

The Denver Rescue Mission will serve the turkeys purchased by Southwest and other donors beginning on Wednesday, Nov. 25, during the Great Thanksgiving Banquet, an annual event hosted by Colorado Governor Bill Ritter. Additional items needed for the Thanksgiving food boxes include canned fruit, canned vegetables, canned pumpkin, boxed stuffing, canned cranberries, and canned yams. Donations can be dropped off at the Denver Rescue Mission's Lawrence Street Shelter at the corner of Park Avenue and Lawrence Street.

Southwest Airlines Employees from Denver also will volunteer at the Denver Rescue Mission to help prepare for this year's Great Thanksgiving Banquet. Southwest encourages its employees to get involved in the communities they serve through its Share the Spirit program, which helps the airline's Employees make a difference in cities across the U.S.

This is a great example of a national corporation making a big difference in a small community. Southwest's giving model encourages employees to give locally. It would be easy for a corporation of its size to only give to the high profile national nonprofits, but instead they take a much more grassroots approach. It's encouraging to see a company take such pride in the individual communities it serves.