THE SPIRITUAL PERSPECTIVE TOWARDS GLOBAL WARMING….!!

blogcatalog
Written by: ketaki Joshi.
While dealing with a complex idea (linking spirituality with global warming) of which very little has ever been written or read.., I will have to start with a basic assumption that the reader is aware of the concept of karma. If I get into the intricacies of this subject.., it would make d post too extensive for the readers.!

For those who do not know what it is.., a quick glance thru the video given below might give you an insight to this concept..

Th video is perfect and it aptly reveals that everything you do (karma- ur actions)comes back.. whether good or bad.., it comes back either in the form of fruits or punishments. Spirituality talks of holding a mid-way and ultimately it is through this balance that one effectively attains salvation also known as Moksha.

THE HIDDEN THEORY – There was a time when there were more animals and fewer men and they lived in small communities, so small n tiny, that virtually everybody knew each another.. It wasn’t the land of law. In fact there was never a need to spell the laws..

NOW, IDEALLY HOW THE CONCEPT OF KARMA SHOULD HAVE WORKED WAS- After living and taking countless births., in the form of various animals, at different levels and finally successfully attaining a life of a man, the soul would ultimately reach a point of salvation after taking a few more births. I shall explain in a nutshell what swami vivekanand has discussed in one of his writings, “ The journey of every soul starts at a point. It moves in a circular fashion and ultimately reaches the same point. Reaching that point, facilitates salvation.” Now the radius of this circular journey for each soul differs from another, depending on the karmas one does on the earth. For some it may be a tiny circle and for a few d circle might still be far from completion. However all circles will be complete in the fullness of time.

BUT WHAT HAPPENED INSTEAD WAS- man grew smarter, wiser, became voracious and he realised that he can do much more than just surviving. That is how with the development came fresh ideas, knowledge, power, growth.. Some used it for the betterment and some utilized it for furthering nastiness.

THE RESULT BEING- Men took much longer to reach salvation.., which also means, the number of births of a soul which ideally should start declining after being born as a man to complete the circle.., rather increased. He lingered for a longer time on the planet.

Meanwhile the souls trapped in the animals.., were being unchained and freed only to come back as humans. All of this was blowing up the population like never before, further resulting in more working brains, more developments and ample temptations to go wrong. For the man the attachments were multiplying rapidly.

Consequently man fell into this vicious circle and today is terribly trapped in this way of life. Every new generation is becoming more and more casual about the morals that once upon a time played the trick partially.

But as morals were fading slowly wit time.., there was law that was filling in the gaps until a time came when laws had completely overtaken morals. Today morals are packed away., referred only as guidelines of how a man ideally should or should not be.

Even the laws have not been foolproof as people under the pretext of experience are doing anything and everything ending up doing more of karma.., needing supplementary lives to pay for it, not realizing that someday they ought to start working towards salvation.. Moreover, earlier life of man was comparatively short. Now the life span of an average man has been enhanced with the aid of medical technology..!!

All this has resulted in accumulation of too many souls. It has become too crowded (like one says bumper to bumper it is human to human out here)and today more souls are trapped in the human bodies than animals resulting in an imbalance of the nature.

Well, God has been watching us all the while.. A scenario like tat of today, was surely thought about as a possibility long back by him.. Hence global warming was a fall back option. Very soon a stage will come, where only such lost, disobedient souls who have been lingering on the planet for ages.., would be the only remains on the planet and on such a day God will end the world under the alleged reason of global warming, cause their circles need to the reach a completion whether they like it or not.

Now if you are wondering if I m striking out science to prove the spiritual angle then that is a strong NO. I want to show in the subsequent paragraph, the beautiful relation that science and spirituality share.

If in case you associate miracles with god.., that is false. 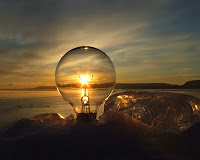 Allow me to put it in plain simple words. Example-when a magician performs, the spectators feels the magic, they feel the miracle.. However for the magician n his assistants (who are also veiwing him just like the spectators).., it is a systematic, logical act that he executes.. Likewise, God ALWAYS works in an efficient and logical manner. We see that logic working everywhere in nature around us. Even within us. How our bodies work, how seasons change, how calamities happen.., are matters, that don't ‘awe’ us anymore, as today we have reached a stage, where we understand how and why a particular thing happens (like the assistants of the magician do).. Things that we fail to understand are tagged as “supernatural”. Not that they are miracles but as far as supernatural matters are concerned we are still playing the role of the ignorant audience. It is simply marvelous…, how science helps us understand spirituality.., as what we study under science is an extension of God.

God is indeed smart. As always, he is going the logical way.. Global warming is a concept which is very logical. We must be happy to be in a position to comprehend the happenings and visualize where it might lead. We must be on cloud nine to know how to stop it.. But as long as there isn’t a spiritual change in an individual, changing the world all of a sudden would be a task. Nah?? Still not getting? Well., not cutting the trees has a spiritual angle to it, only if you want to realize it. Walking down rather than using a vehicle again has a spiritual angle that is “simple living”. Ultimately it boils down to the basic primary lessons that are taught under the concept of spirituality, a glimpse of which you will get, if you go back to our pre-primary schools. Unfortunately what we learn as kids is easily forgotten. Spirituality is not just confined to God. It has a lot to do wit oneself, a lot to do wit karmas, a lot to do with your intentions.

Well.., This is an endless topic but I have to call it off, and all that I can say is please remember “ As you sow, so shall you reap.” A scientifically proven fact stirring a spiritual thought..

OHHH I so love the relationship that science and spirituality share.. :-)
Please Note: These thoughts are expressed by Ketaki Joshi, a resident of India, who loves blogging. Have a good day.!