The Internet is abuzz with--as usual--a bunch of conflicting information about Star Wars VII and how/whether Mark Hamill and Carrie Fisher will be reprising their roles as Luke and Leia.

Conjecture at ScreenRant is that the new episode will draw on Expanded Universe (EU) material.  Specifically, Timothy Zahn's books from the 90s apparently include a storyline that picks up with Luke's and Leia's children approximately 40 years after we last saw them.  That would fit well with the real-life timeline.

EOnline reports that a representative of LucasFilms has said unequivocally that the next chapter will not be based on the books, and will be "an original story."  But wait--was that back when Lucas was planning to do the next trilogy himself, as Mark Hamill claims he discussed a year or more ago?  Will it still hold true, if it was ever true?

The author of an unauthorized Lucas biography claims to have seen outlines for twelve movies, and that the episodes focused on the Skywalker and Solo children take place when Luke and Leia are in their late thirties or early forties.  Hamill and Fisher aren't exactly looking their ages (61 and 56), but 30s would be a stretch for either of them. 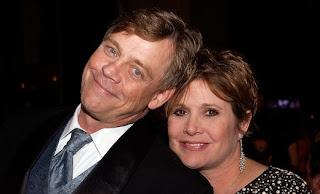 Still, I've been dismayed by the popularity of the idea of simply casting new, age-appropriate actors to play Han, Luke and Leia at that stage of their lives.  When I saw the suggestion on Comicbook.com, it struck me as so outrageous that I read it out loud to my teenage daughter for humor's sake.

She looked at me for a moment and then said, "Wait...what?"  Since she's thirty years younger than I am and untainted by having seen the original Star Wars in the theater at age 11, I felt like my sentiment must be universal...until I read the comments on Comicbook.com.  Apparently, there's a pretty large faction that thinks if the script calls for Luke and Leia, we should just bring in some fresh blood.