She was shopping with her friend at one of the major malls in the capital when they went into one of the stores to look scan items and see if there was any piece that was interesting enough to be made a part of either of their wardrobes.

As she was looking through the racks, she noticed a few differently designed shirt dresses which felt like chiffon and had a comfortable cotton and nylon under shirt attached to it to keep it from being transparent when putting it on. It also had a chiffon belt to tie it across the waistline. She liked it and asked for her friend's opinion on it who told her : "If you like it, buy it." and so she did. 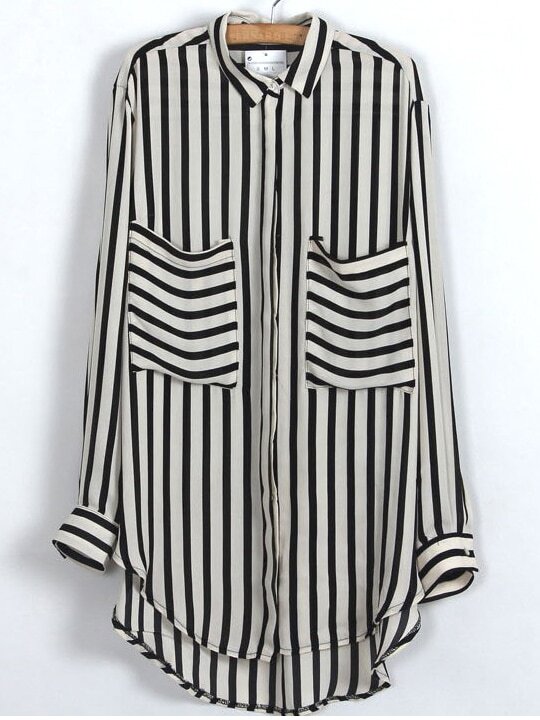 She began wearing it to work when she wanted a change from her regular outfits to feel both professional and sharp-looking. As they were only allowed to wear skirts as a uniform and because it was to long to wear with a skirt, she styled it in a way where she would  tuck it in a little then let the sides flow to shorten it a little.

Her cousins did not like the shirt and told her that she looked like a prisoner out of jail with those stripes, but she like the shirt and ignored their comments although she began feeling a bit conscious about whether it really looked that bad.

Her friend brought her the tights which she wore for a couple of days and was slightly self-conscious about. She was complimented on her dress which made her feel better about it, and she mentioned to the person who complimented her that she wore the same dress shirt before but had styled it in a different way.

She went back to work after the summer, and on a day when she was wearing that shirt, a colleague who was a senior in age told her that she looked elegant and added that all the outfits she wore were elegant. She was happy to hear that, as she did not think her outfit choices were anything too special.

The next summer she went back to grad school and had packed that shirt with her as an option for days where she was to give presentations. When she was going into the building one day, she ran into her professor who complimented on her shirt, even though it may have just been an attempt to avoid any awkward silence.

She was feeling good about the shirt till then and forgot any negative comments that she had gotten about it. One day she was going to school where she also had a short presentation. She took the shirt out and matched it with a skirt and headscarf. One of her friends back home, asked her to send him a picture of her outfit for that day. She sent the picture expecting to get a compliment, but he told her to change her outfit and that it did not look good. At first, she refused and said that she did not care about his opinion, but he keep on insisting that it did not look good and that she could do much better and had nicer outfits. She told him that she had been complimented on the same shirt a few days ago, and that people would not compliment her on it if they thought it was horrendous.

She then started reflecting on the compliment she received; maybe it was a way to tell her that she should never wear that shirt again. She became confused and self-conscious and as she looked in the mirror before she left the apartment, she saw an ugly outfit; a point of view of another person whom she had adopted. She took off the outfit and wore a completely different one which she sent to him and he approved of.

That shirt never left her closet again for the rest of the summer. As she was packing her bags to leave again this time for good, she began putting clothes she would be giving away in a box. She eventually added that shirt to the box, but was not happy about it.

She later informed her friend that she had gotten rid of the shirt, and that she now regretted it and really missed it. He told her that he would replace it for her with a nicer one, but that did not keep her from thinking that she had made a wrong idea; for she had gotten rid of something another person did not like, when it belonged to her and she was satisfied with it and really liked it. She let go of something she liked because of an external opinion of someone who was not too trendy himself. She hated a lot of shirts he had and wore, but she never said anything because she did not want to hurt him and because everyone was entitled to their own fashion sense.

That friend is no longer in her life, and he never replaced the shirt. The moral of the story is not to give up something you like for someone who is only passing through your life only to leave you without what you liked and without their companionship.