blogcatalog
Many Arab men go abroad to study or work and met a woman there whom they get married to for one or more of these common reasons: to get papers for citizenship of that country;  to avoid paying an expensive dowry and wedding expenses back home;  to guarantee his future children a strong passport; to avoid the nagging of an Arab wife as foreign women  normally appreciate Arab men more than Arab women do; to be able to take his wife to drink and party without any cultural or religious objections; to be known for being an interesting couple; or because he finds them more attractive than women of his country.

Some men do not need to go abroad to find their foreign wife; they find foreign women who are already in their country. Such is the case with the main character of our story today. 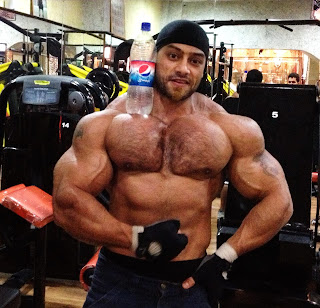 This young man was very fit and began working on building up his body since he was 13 years old. He was very particular about what he ate and how his body looked at all times, and he was always turned off by how much his female friends ate when they sat for lunch at the university cafeteria. He would usually drop comments in a lighthearted way that they needed to lose weight and work out more if they wanted to look good in jeans. He promised himself that he would never date or marry a woman who was not as physically fit and attractive as himself.

Once he even met a female peer  at university who he got along with very well and they became quite fond of other. His friends kept telling him to ask her out, but he refused saying that her thighs were a bit too thick and that he would not want people to think that he had low standards when it came to women. He told his friends: "If she has such large thighs without having kids, imagine what she will look like after having four kids!"

He dated quite a few women, but none of them lived up to his standards of maintaining a perfect body. Some of them had too many stretch marks from gaining weight in puberty while others were not toned enough and had too much sagging skin than he was ready to deal with. Others had a protruding stomach and when they wore tight jeans, it would result in an unattractive muffin top. He did not want a woman whose thighs were too close together from all the fat, he was looking for a woman which a thigh gap.

One day his friends called him and told him that they were planning on going to Phuket for a vacation and asked him if he was interested in joining them. Phuket was known as a popular destination among single Arab men who wanted to go to wild parties in clubs, smoke substance, and hook up with prostitutes. He immediately agreed and began getting his documents ready for the next day so he could go to the embassy and apply for a visa to freedom and petite women.

The woman who interviewed him at the embassy caught his attention. She had long black hair and soft facial features. Her nose was small unlike the big noses of girls he had previously tried to kiss, but their big noses always seemed to be getting in the way. He noticed her slim figure and toned body and complimented her: "Why are you working with papers, you look like a model." She blushed and replied: "I was previously a model in Thailand before I began working with the embassy." He kept joking and making her laugh and asked her out to dinner once his interview was over. She agreed and he picked her up that night. As they were talking, he found out that she was 9 years his senior, but he told her: "You look so much younger than your age." The night ended happily and he was no longer thinking of going to Phuket for vacation, for what he was going there to look for was in in his arms...