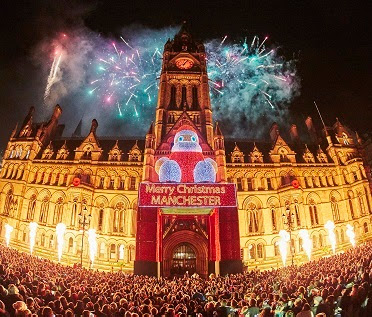 Let’s go forward in time to a history lesson at school, say in the year 2066. The conversation will be:

Teacher: Johnny. Can you tell me when …

Teacher: But I hadn’t finished.

Johnny: I know. But it happened in 2016 – that was the year that everything happened.

Here’s something else I heard.

From Twitter: OH MY GOD! HAVEN’T WE HAD ENOUGH OF THIS BLOODY YEAR?

I will not look back on 2016 with fondness at all. There are many reasons for this most of which are political. We have all witnessed a new trend in political debate on both sides of the Atlantic Ocean, where lies abound and post-truth politics is rampaging across the world like a mad beast.

And let’s not forget the legendary people who have died this year, people like David Bowie and Prince amongst others.

Also, I lost my uncle this year as well as my hellcat Liquorice who suddenly dropped dead in the summer. I miss them both.

However, as we approach the end of the year, and since its Christmas, I think it’s time to be more positive, generally. I have finished work for 2016 now and I want to enjoy the last couple of weeks with an optimistic outlook. Of course, I will be reviewing the year just after Christmas but I can let you into a secret – my resolution this year is to try to cut down on ranting and have a much more enjoyable year next year, whatever the hell Brexit throws at me or whatever trouble ensues when Donald Trump finally gets his hands on the Presidential seal.

The first thing I am going to do is consign the following people to Room 101, where everything hellish lives:

David Cameron, Michael Gove, Nigel Farage and Boris Johnson from the UK, all of whom have made me rant mercilessly this year and who I hold personally responsible for Brexit.

And from the other side of the Atlantic, I would like to also put the following people into Room 101 for equally pissing me off:

I don’t know how the US will cope with their president elect suffering Piers Morgan in Room 101 but I am sure you will cope, my friends.

It’s Christmas and we should all rejoice in a time of good year to all men (apart from those I have just locked away forever).

In the past, I have written alternative lyrics for famous Christmas songs so this year I will do the same again. Here are my past efforts:

This time my victim is Rudolph the Red-Nosed Reindeer.

Dave, the Mancunian blogger,
Had a giant monkey's nose
And if you ever saw him
You’d laugh at his choice of clothes
He had a Christmas jumper
And a very silly hat
And, thanks to all the turkey,
He was looking very fat
Then one rainy Christmas Eve,
Santa came to say:
“Dave your belly’s such a sight
Won’t you drive my sleigh tonight?”
Dave is now the new Santa
With a giant bushy beard
Delivering all your presents
Most of which are very weird

This may not be my last post before Christmas but I think now is a good time to wish you all:

May Father Christmas (Santa Claus if you are American) bring you all the gifts you want.

By the way, kids, the above lyrics are not true, just a figment of my warped imagination.

Imagine seeing a fat monkey with a beard in your house on Christmas Eve. 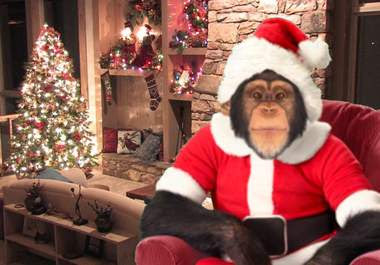