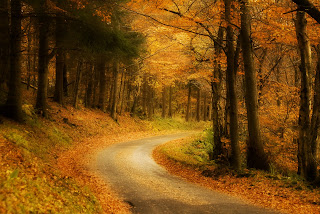 I was walking with a friend not long ago, someone with whom I have much in common. Like me, she's in her 50s; she's lost a lot of weight and struggles to gain it back; she's experienced a lot of illness over the past few years, and has been divorced by her mate. Here we are, strolling in a park under the drying leaves, marvelling that we're still alive.

We stop dead in our tracks -- yes, I said 'dead' -- and gawk at each other. Then we double over laughing. Other park-goers -- especially the furtive young -- give us a wide berth. Two nutty eldering women ass-over-teakettle over some idiocy! What a sight!

Eventually we made our way back to verticality and wandered on, still sputtering.

"God, laughter's good for the heart!" my friend blurted out. "I mean, don't you feel warmer?"

I did. I was even sweating a little under my three layers.

My friend -- Joy, I'll call her -- swung her arms, batting me with her left. It was a spontaneous thing, this soaring of landlocked limbs. Joy jigged a little too, a wee highland tappity-tap. She tipped her head back and her happy mouth fell open. Suddenly she was six, a goofy little fool all pudged up in her scarves and sweaters.

Then she drew everything in ... She stilled herself and levelled her eyes with mine.

She'd lost a lot -- her home, some friends, her health, her mate, all certainty. And here she was, dancing a gentle jig beside me. She dropped her head, raised her arms, and her feet two-stepped.

Up went her head, and in to a circle she spun. A slow, quiet spin, as befits a skinny little thing who's prone to occasional faints because her blood pressure tends to plummet with nada notice.

There was nothing, really, to see of gain -- nothing in that moment that was particular to her. We were outside, in a public space, sans tea, chocolate, shelter, warmth. We were out in the open with nothing to hold onto, a few feeble dollars in our pockets, under a belligerent sky.

I suddenly found it very easy to breathe.