The Things that Keep Me Up at Night

Probably you know that I've been having some semi-serious medical problems.  And that I have had almost no income during the past 3+ months while I've been dealing with that.  And that I've naturally been having problems with the insurance company. And that my car went from crappy to altogether dead and I've had no transportation for over a month.

But really, I can deal with all that.  This is what's been keeping me up at night: 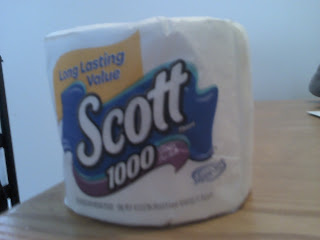 Sure, when you have no way to get to the store, you think about running out of things like food and medications.  But really?  In an absolute emergency, you can live for days without food.  Toilet paper?  Not so much.

Fortunately, there's a gas station with a convenience store not far from my house and we've been able to pick up a lot of basics there--paper products, canned food, milk, etc.  The thing is, it's not a high-volume store and they don't restock all that often, so the other day, during our ten-inch snowfall, I bought their last roll of toilet paper.

And then I felt greedy.

See, we still had a couple of rolls at home.  AND I have a local friend who could take me to the store in a real pinch.  We don't have cabs or buses here, but if I were really desperate I could pay $20 for a car service to take me to the store and pick me up.  So my worry wasn't that I'd bought the last roll of toilet paper and what would we do next...no, it was WHAT IF SOMEONE ELSE NEEDED THAT?

I really, really wish I were exaggerating for humor's sake, but I actually did find myself lying in bed that night thinking about the depth of the snow and worrying that someone else in the neighborhood might trek out to the gas station in desperation and find that they had no toilet paper.