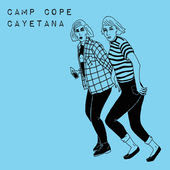 The 4-track pairing works as well as lime and salt, after the bands had a chance to bond on tour in Australia. While fans of either band will already be familiar with two of the songs, both wrote originals to round out the experience as raw as their trek together. All four tracks are gems, especially the bouncy roughness of "Mesa" by Cayetana and measured ebb of "Footscray Station" by Camp Cope. LHRS: 6.1 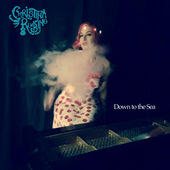 Although not nearly as boisterous as the aforementioned, there is a addictively relentless undercurrent in the new single "Down To The Sea" by Brooklyn singer-songwriter Christina Rubino. Lush and smokey vocals make for a more anthemic indie rock aesthetic.

The track is the first release off Godspeed and Guns, which carries the same contemplative meanderings but not always the same moodiness of the dusk cut to "Down To The Sea." Check out the title track, "Orbit," "Feather," "Ha Ha," and "Lullabye" for the solid cross section of progression. "Irish Blessing," with its bagpipe accompaniment, is something to hang onto as well. LHRS: 4.1

On Apple: Christina Rubino - Down To The Sea

On Amazon: Christina Rubino - Down To The Sea 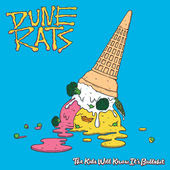 Changing gears, Dune Rats is all about keeping the buzz alive as a stoner pop indie band that hails from Brisbane. There is a certain surfer vibe to their restless suburbia existence that eventually manifests itself into a collection of lo-fi party songs.

Dune Rats isn't nearly as sharp as the Wavves, it's still pretty clear they can accompany Nathan Williams anytime with their new album The Kids Will Know It's B******t. The craziness inspired by the stories stolen weed and drug-themed house parties makes for a pleasantly enjoyable mess. LHRS: 3.3 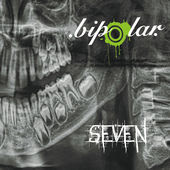 After eight years of growth and evolution in the unlikely city of Las Vegas, female-fronted metal band .bipolar. is ripping their blistering 4-track EP Seven. The band, now consisting of bassist Chris Kmit and guitarists Kevin Lemus and Jaisen Hinds along with Charlie and drummer Brian Hanks, has finally found the right technical mix to make something remarkably listenable for DIY metal fans.

Expect to be left breathless form the very first track "Ernest" as Charlie dispenses with her new found sense of savagery. All the same, don't expect it to let up as the band pounds out "Pyrite" chugs "Habitual" or flys by with the instrumentally lighter "Overnighter." LHRS: 7.3

These outings round out our top four this week. Honorable mentions: "Sheep" off Astrovan by Mt. Joy, Nosebleed Weekend by The Coathangers, and Machines of Our Disgrace by Circle of Dust on iTunes. "Keeping Hope Alive" by The Two Tens via Bandcamp is also worth a listen. A few more tracks caught our interest over the last two weeks. We'll drop them in when and if we can.