Tips on Coping with Jet Lag 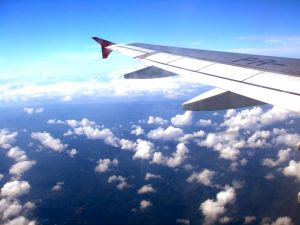 Jet lag, a term that is ever familiar with the frequent travelers. With the world becoming a global village and with the increase in need to travel for work and for other reasons, people are traveling more and more regularly. There is a saying, by some people who are traveling a lot, "I'm taking the plane just like taking a cab."

Jet lag is a physiological condition which is a consequence of alterations to the biological clock, which is a small cluster of brain cells that controls the timing of biological functions (circadian rhythms), including when you eat and sleep. When traveling across a number of time zones, the body clock will not be in sync with the destination time, as it experiences daylight and darkness contrary to the rhythms to which it has grown so used to. Besides being caused by traveling to different time zones on jet as its name implies, jet lag can also be due to shift work, daylight saving time, altered day length. They are known as desynchronosis, dysrhythmia, dyschrony, jet lag, or jet syndrome.

The condition of jet lag may last many days and depends on individuals. People who normally stick to a rigid daily routine, are often the worst sufferers. People whose normal lives involve highly varied routines can often adjust their circadian rhythms better, and adapt to a disruption of normal eating and sleeping patterns. People who sleep easily can also cope better with the adjustment. The intensity of the condition of jet lag also depends on the number of time zones cross. For people flying across only one or two time zones, they may be able to adjust without noticeable effects of the time change as compared to others who are flying across three or more time zones.

Direction of flight will also determine how intense the condition of your jet lag will be. There seems to be some evidence that traveling west to east is the more disruptive. Travelers flying east "lose" time. This disruption to their body clocks affects their meals, sleep, bowel habits, and other daily routines consequently. Travelers flying west "gain" time and usually have an easier time adjusting than eastward travelers.

The symptoms of jet lag can be quite varied, though on the whole, an individual may experience the following:

5 Tips to Cope with Jet Lag

Below are some tips which you can use to help you cope with jet lag:

1. Pre-flight: Try to relax and not be too excited or concerned about your trip. Staying in shape also helps you to cope better with jet lag. Whether you are traveling are not, it is always important to stay in tip-top physical condition and that will mean plenty of rest, exercise and eating right. And remember to get a good night of sleep prior to departure.

2. Drink Plenty of Water: As mentioned above, to prevent dehydration, it is important for you to drink plenty of water during the flight. It is advisable not to drink alcohol or even caffeinated beverages before, during, or just after the flight as they not only cause dehydration, but also disrupt your sleeping schedules.

3. Move around on the plane: While seated during your flight, exercise your legs from time to time. For example, moving your legs up and down and back and forth, bending your knees or standing up and sitting down etc. You may also want to take a walk in the aisle every hour or two. This not only prevents blood clot in the legs (which may lead to death in serious cases), but also helps to reduce discomfort and refresh your body. Just don't do jumping jack in the plane, you have caused the plane to 'jump' too. In the event where there are stopovers, do get off the plane wherever possible to do some exercises or take a walk.

4. Wear comfortable shoes and clothes: For once, looking good on the plane is not as important as feeling good. Make sure you are comfortably dress for the flight. Avoid items that pinch, restrict, or chafe. A good point to note is also to keep in mind the climate in your destination.

5. Sleep aids: Blindfolds, ear plugs, neck rests and blow-up pillows are all useful in helping you get quality sleep while flying. Kick your shoes off to ease pressure on the feet (some airlines provide soft sock-like slippers, and many experienced travellers carry their own).

A few words of cautious: some people use sleeping pills to alleviate jet lag. It is highly not advisable as sleeping pills induce a comatose state with little or no natural body movement, and it is well known that prolonged immobility during flight can lead to fatal blood clots (deep vein thrombosis). In addition, many so-called sleeping pills are variants of anti-histamines and they tend to dehydrate significantly, adding to the already significant problem of in-flight dehydration.

Thus with proper planning of your flight in advance by taking notes of your flying direction (whether it is east to west or west to eat), time and coupling with exercises and diet and plenty of rest before the departure can alleviate jet lag. Wishing you a pleasant flight!