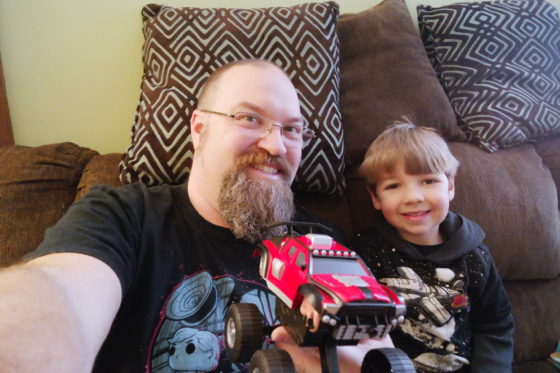 We received a Monster Trucks toy from my contact for posting promo on my blog about the movie. I am under no obligation to blog about this toy but figured it would be something fun to show you.

The Toy is called the Monster Vision Jumping Truck. This truck senses when there is an obstacle in front of it and it jumps over it. I thought that this was somehow motorized and the car would propel itself but I was wrong. You have to roll the car and when it gets close to an obstacle it will jump up. You push the car down to lock it into place and then push a button on top of it (I am not sure what that does exactly) then you roll it. I thought that when you pushed the button the motor would start and the truck would go. It took some trial and error to make the truck work the way we wanted it to work but we eventually got the right speed in order to make the truck clear the jump.

Before the movie came out I saw a bunch of Monster Trucks toys and I was interested in them. Specifically the Die Cast Metal vehicles. They looked great. They go for the same amount as a speciality Hot Wheels vehicle but are made by SpinMaster.Now that I;ve seen the movie I’d like to get Creech, the one in the red truck and the one in the green tuck. So those three trucks. There are other ones as well which were not in the movie or repaints but I think those three would be the ones to get. The trucks look cool.

Andrew had a fun time with this toy. He tried it over and over again and when he made it jump correctly he was super happy. I have to think of it more form the perspective of a kid enjoying a toy than an adult wondering why it doesn’t work perfectly every single time. No toy works every single time. This works well enough that it is still fun to play. Plus, it is a cool looking Monster Truck so what’s not to like.