After seeing  Kris Aquino in her own Kristv program feasting  on luscious grapes hanging by the vines at Lomboy Farm, I got enticed to experience the same.   I do admit that I’m quite gullible some times.   I tend to believe that what is shown is true or real, especially on Kristv!  Well..  I guess, I am not alone on this viewpoint.  Many seems to follow the said TV show and been misled sometime, somehow! 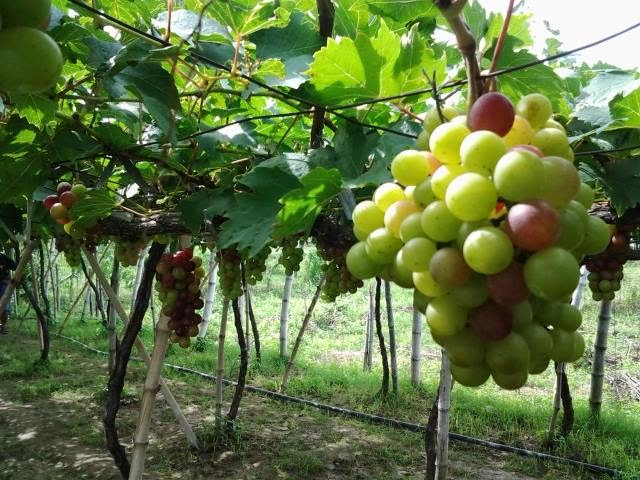 Allured by the mentioned TV feature and adding the fact that I do miss the beach,  I pushed my family to travel the many miles to the north last weekend.   Coming along with us was DD's fiance. We headed to La Union early Saturday and  took pleasure in traversing the newly opened TPLEx (Tarlac Pangasinan La Union Expressway).  With DS on the wheel, we reached La Union by late noon.  We checked-in at a beach resort named Cabaguan Seafront Resort.  It’s a budget resort so it’s not for those who want a stylish accommodation.  Nevertheless, the room is air conditioned and good enough to pass the night away.   The weather was quite a bummer for it prevented me from enjoying the beach.  No regrets though, coz the beach isn’t that attractive anyway!

The following Sunday morning, everybody’s up early.  We moved few more kilometers up north and we reached the main objective of our long road trip: The Lomboy Farm in Bauang La Union.  The big signage of the farm along the highway is not hard to notice.  We pulled over alongside the many vehicles parked ahead of us.  It maybe one proof that not only me believed the Kristv  feature of said farm. They admit, they have a sudden influx of visitors.  This, I think is enough evidence that I wasn’t alone in getting a leg pulled. Lol!

Initially, I went in alone to look for the owner whom I had previously communicated with through text messages, Mr. Ave Lomboy.  He introduced himself and found him friendly and accommodating. I was cheerfully dealt with and given a fragment of information about him and his farm.  I was told (and also learned from the TV program) that  we would be guided and assisted and that a tour fee of P200.00/pax will be collected.  "It’s for the people in the farm", he said.   We were 5, thus I shelled out P1000. (Though I should have paid for only 4 coz DH didn’t join in). My excitement heightened when they handed me 5 Eco bags (with Lomboy Farm print).  It meant to me that I’d be filling those up with fresh grapes harvest I’d pick straight from the vines.   (Unmindful whether the cost is cheap or not for P150/kl.)  Just something for a thrilling experience.. .  or so I thought!   I readied myself to a long walk in a massive vineyard and huge guaple plantation.  Got thrilled as we were led by a boy on a bike to the farm.  But that thrill was only short lived.  Our trek stopped to a small plot of what seems to be just a small backyard grape farming. There were grapes alright but not ripe enough for picking and only on a short stretch of plot.  "Is this it? .. Is this the Lomboy Farm?" The big kiddos asked.  Who could give us the answer?  We were left hanging with our questions.  There was a couple of elder ladies we wished to get answers from but they were busy selling their grape seedling plants.  The residents of the neighborhood appeared to be overwhelmed by the turn of people coming in their community by big groups.    Contrary to what was mentioned by the owner that we will be assisted and guided by somebody who would answer queries along the way, no one appeared!  .. And by the words "assisted farm tour", who wouldn't imagine a vast vineyard and a massive guaple plantation to tour?  Whew!  I felt kinda deceived!  What's the 1000php I paid for? "It's for the Eco bags, Ma!, They gave you Eco bags, remember?"  That was DD's reply to my question, with a wide grin!

There's only one good thing I had, I was able to visit Agoo Church.  My first time!