Despite an uproar over the release on Friday of a video in which Republican nominee Donald Trump can be heard making sexually aggressive and lewd remarks about women, SurveyMonkey's tracking data suggest that the controversy has served mostly to reinforce rather than counter existing voter attitudes. Overwhelmingly, Trump voters see the video comments as more of "distraction" than a reason to reassess their support. That said, interviews conducted by SurveyMonkey in the two-day period after release of the tape suggest that, if nothing else, the issue may spur voters to lock in their choices, with Trump still far short of the votes he needs to win.

The issue is not a lack of awareness. By Sunday night, 78 percent of registered voters nationwide had heard "a lot" or "some" of the coverage of the 2005 tape of Trump, with 14 percent saying they had heard "only a little" and only six percent "none at all." Reported awareness was about as high among Democrats and Republicans, although Clinton backers and Democrats were more likely than other voters to say they had heard "a lot" about the story (Note: the results reported here may differ very slightly from what NBC reported on Monday because these results are for all registered voters and include interviews conducted through midnight Eastern time on Sunday). 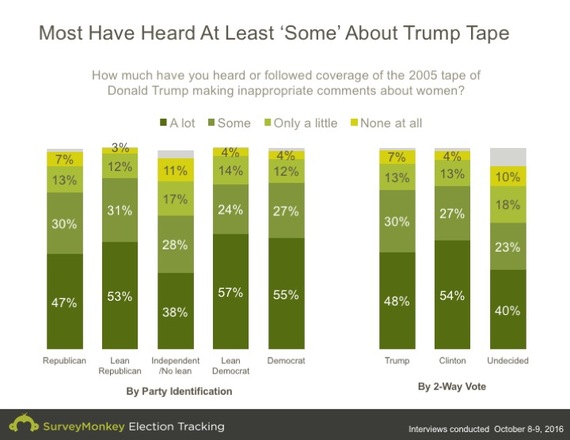 Not surprisingly, independents and undecided voters were less familiar with the controversy - they tend to be less engaged in politics and lighter consumers of political news - but most still had some awareness. Two-thirds of pure, non-leaning independents (66 percent) and slightly fewer who reported no preference between Clinton and Trump (63 percent) had heard at least "some" about the tapes by Sunday night.

While most voters are familiar with the story, more say they consider Trump's comments "a distraction to the campaign" (56 percent) than "an important issue to discuss" (42 percent). 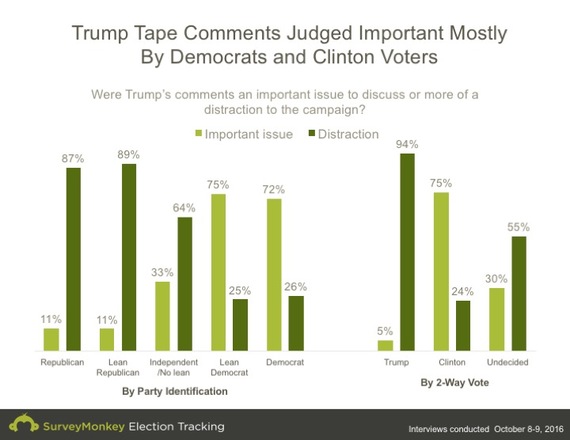 Large majorities of Democrats, independents who lean to the Democrats and Clinton supporters alike see the issue as important to discuss, but other voters are less exercised about it. Nearly all Trump supporters, Republicans, and Republican-leaning independents consider the issue a distraction. Non-leaning Independents and voters undecided about Clinton and Trump are closer to the Republicans - 64 and 55 percent respectively say the controversy is distraction rather than an important issue to discuss.

A more direct question about the impact of Trump's comments on voter preferences produces very similar results. Far more voters say the controversy "makes no difference in your support of Trump" (57 percent) than say it makes them less likely to support him (38 percent), with most of the latter responses coming from Democrats and Clinton supporters. 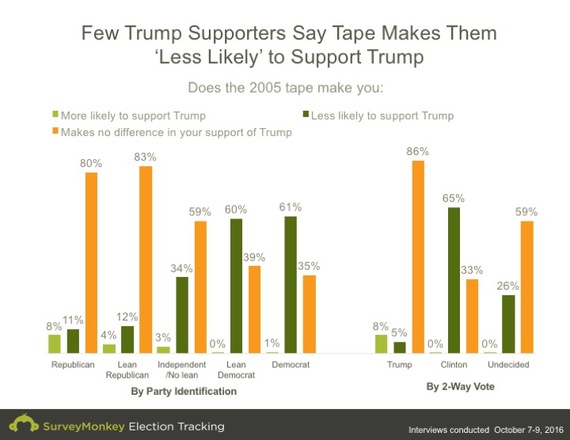 Nearly two-thirds (65 percent) of those who already support Clinton, and nearly as many Democrats (61 percent) and Democratic-leaning independents (60 percent) say the controversy makes them less likely to support Trump. Just 5 percent of Trump voters say his comments makes their support less likely, while most of the rest (86 percent) say it makes no difference.

So is the controversy and the ensuing civil war among Republicans having no effect? Hardly.

Such a conclusion would miss the larger context: Clinton continues to lead Trump nationwide, and the controversy has served to reinforce existing vote preferences and cripple the effort Trump should be making to consolidate what should be his base of support among Republicans.

First consider Trump's Republican defectors. In our four-way vote question this past week, among all registered voters, 83 percent of Republicans and Republican-leaning independents support Trump, leaving a healthy double-digit number who express support for either Clinton (6 percent), Libertarian Gary Johnson (8 percent) and even Green Party candidate Jill Stein (1 percent). These numbers have remained essentially unchanged for the past four weeks.

It is little coincidence that the relatively low percentages of Republicans and Republican-leaning independents who consider the Trump tape worth discussing and not a distraction (11 percent) or that say the comments make them less likely to support Trump (11 percent) are very close to the percentage already supporting a candidate other than Trump during the same time period (13 percent). Our analysis shows they are largely the same voters.

So at a moment when Trump badly needs to increase his share of Republicans, the controversy is helping to lock down their defections.

Second, Clinton saw another slight uptick in the past week on her favorable rating among all voters, while Trump's rating ticks slightly downward. This week, Clinton's favorable rating clicked up to 43 percent, a two-point increase from the previous week, while Trump's fell from 38 to 36 percent. The seven point difference in their positive ratings is the biggest gap in Clinton's favor since during the week of the Democratic convention in August. 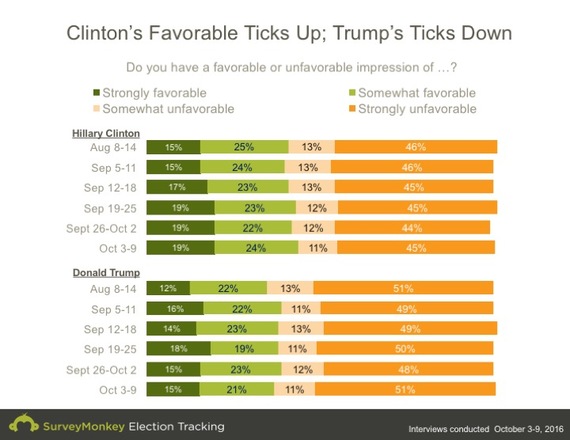 So while Trump struggles to gain back Republicans, Clinton appears to be making progress on what should be a strategic imperative for her campaign: Helping conflicted voters who dislike her but like Trump even less warm up to Clinton just enough to give her their vote (rather than supporting a third candidate or not voting).

The tape controversy is probably not moving votes as much as reinforcing preferences already in place. As such, it's still very bad news for Donald Trump.