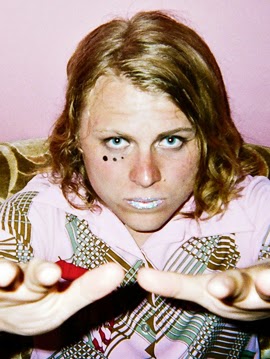 Much of the buzz surrounding the four-pack EP Mr. Face dropped by Ty Segall is that it doubles as the world's first pair of playable 3-D glasses. (The album artwork can be viewed in 3-D when you press the 7-inch records to your face and peer through them.)

It's almost a shame too, but only as it undercuts one of his more intimate moments as a musician. But then again, that is part of the charm of Segall. He makes music like kids draw pictures — scribbling lines with such wild abandon that they can treat most of their creativity as cheap throwaways because they're all too busy in the business of producing more, never looking back.

Then again, there is something of the statement in giving the discs a dual purpose. It suddenly makes the physical form relevant in an age when most music is relegated to a digital download or (worse) random streaming from a collection arranged by someone else.

So perhaps the physical production does break though in that regard. Segall isn't content to be heard through headphones alone. He wants to be played with purpose in the living room, his music filling up the space around you. Mr. Face does that very well too.

Mr. Face is an intimate take on Ty Segall.

For someone who never stands still — bouncing around various underground bands, creating some, and circling back — Mr. Face is surprising settled, anchored mostly by an acoustic guitar on the front half of the EP before it drifts more toward the rhythmic back half (when he does deliver several doses of always welcome solos). Much of it is subtle by comparison to his standard fare.

Without sacrificing any of his vitality, Segall eases into the EP with the title track and sings about how individual valuations often revolve around money. He doesn't judge it as much as he dismisses it with whispery vocals and pulse quick acoustic rhythm.

The tone of it tells you that he is still taking it slow (in comparison to the frantic pace that defined much of his early career and not slow in comparison to other artists), offering up the EP as holdover until he commits to his next album or project. Fans will most likely think of it as a step back toward the midpoint of his career when mid-tempo indie rock characterized most of his work.

After Circles, Segall delivers the lyrically sparse and guitar solo heavy Drug Mugger, a garage glam rocker that alludes to medicated trade-offs. The main pained moment is warning people away from wondering where things come from, making the feel of it ominous and oppressive.

Segull ends the EP on The Picture, which is the most personal and meaningful. The Picture is a song about learning to say goodbye. It's sad and freeing at the same time, converting some understanding that saying goodbye can help you see those you miss in a new light.

Although rife with loss and foreboding, Mr. Face ends on a note of resolution. Things can work out in the end, even if that sometimes means finding inner peace. And somehow, it might help you settle in without settling.

Overall, Mr. Face showcases Segall returning to and mastering his mid tempo indie rock meanderings in between albums. At the same time, Mr. Face seems to suggest that something great will come from being more resolved with the loss he once endured. Good for him.

Mr. Face can be found on Amazon or downloaded from iTunes. The songs are striking enough to include on a playlist, even if the intent here is to hold it in your hands (and up to your eyes). The first pressing, by the way, was sold out.