U is for Un 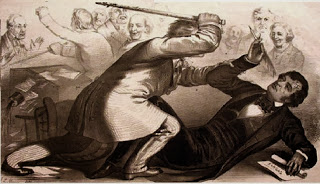 My friend, Rocky Mountain Woman, expected me to expostulate about the state of affairs in America today.  I decided to oblige her with this post.

Congress, in a most unprincipled way, is determined to undermine the American citizens by shutting down the government.  These selfish brats need to put on their "big boy" panties, and think about the ramifications of the unmitigated gall they are currently displaying.  Everyone in this country is being hurt by their actions.  Workers are not being paid, Head Start is closed down, and the parents are scrambling to find child care so they can continue to go to work, or to school, in order to better themselves, the national parks are all closed, and the small businesses that service visitors to the parks are hemorrhaging money.  NOAA is shut down except for its executives, and the list goes on and on.  God forbid that we should suffer some unexpected national disaster while all this crap is going on!!!  Everyone is being hurt EXCEPT Congress.  They are still being paid, and their private gym is still open, so they have nothing to lose, they think.  They are holding America hostage, and they don't give a rusty f*** about who is getting hurt.

When are the voters in America going to wake up and realize that Congress is no longer serving them?  This country had finally begun to dig itself out, turn itself around, and our future was looking brighter than it had since 2008.  Then these mean spirited, selfish bigots stepped in, determined to tear down every step we had made toward recovery.  The American people are very uneasy and unhappy with the current state of affairs, and have told Congress to get our country running again, but those words have fallen on deaf ears.

The American people wanted The Affordable Care Act, and it is now A LAW.  But Congress doesn't like it and they want it to go away.  People are flocking to the websites in droves, yet some "red states" are refusing to cooperate in helping their citizens sign up for this health care program.  Congress doesn't care what the American people want--they have their own insurance, and the rest of us be damned.  They have put an undue burden on America, and that is NOT what they were elected to do.

Here's what I think we need to do:  THROW THE B******S OUT OF OFFICE!  They are not serving their constituents--they are only serving themselves.  They have become uncontrollable!!

There was a time in this country when the only perk one received upon being elected was the honor of serving the people.  Now they have benefits and perks coming out their a**es.  They think they are invincible!!  Show them, America, unequivocally that THEY ARE NOT.

Congress, get your sorry butts back to work FOR THE PEOPLE!  Pay America's bills!  Increase the national debt limit so this country isn't embarrassed and downgraded! Stop being so underhanded, so ungodly, so  unbearably selfish, so unconscionable in your behavior!!!  Do the right thing for America, for a change!!!

This concludes my offering for Alphabe-Thursday.  I am going to hop over to Jenny's blog and read some of the other offerings.