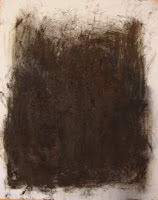 Been signed out for a long while since the dawn of the shroud mincing words with the weakened fortresses of sick and contagious anxiety chests at attention most of the time overtime so over it not over it into the night that deals its horrors in your dreams in your cranial furniture the cesspool of flawed blendings trying to spit out words spitting or drooling with punctuation or pauses or and or can he or she or it or and or this that common distinctions ending where I fall asleep almost and then startle with another segment of the worm that loops in my markings and grades never entered for anyone to remember or even or odd or and or terse knocking at the wall behind the picture of the child wearing a sheet over his whole dirty body no one to remind him to shower they just never leave their rooms they just never leave their rooms.